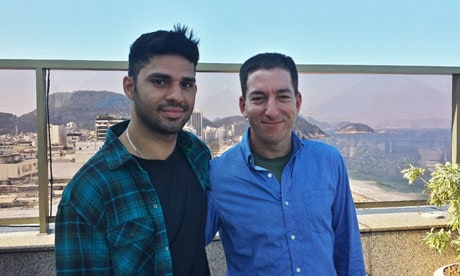 Glenn Greenwald (right) and his partner David Miranda, who was held by UK authorities at Heathrow airport. Photograph: Janine Gibson

As my colleague Ryan Deveraux reports, a lower U.K. court this morning, as long expected, upheld the legality of the nine-hour detention of my partner, David Miranda, at Heathrow Airport last August, even as it acknowledged that the detention was “an indirect interference with press freedom”. For good measure, the court also refused permission to appeal (though permission can still be granted by the appellate court). David was detained and interrogated under the Terrorism Act of 2000.

The UK Government expressly argued that the release of the Snowden documents (which the free world calls “award–winning journalism“) is actually tantamount to “terrorism”, the same theory now being used by the Egyptian military regime to prosecute Al Jazeera journalists as terrorists. Congratulations to the UK government on the illustrious company it is once again keeping. British officials have also repeatedly threatened criminal prosecution of everyone involved in this reporting, including Guardian journalists and editors.

Equating journalism with terrorism has a long and storied tradition. Indeed, as Jonathan Schwarz has documented, the U.S. Government has frequently denounced nations for doing exactly this. Just last April, Under Secretary of State Tara Sonenshine dramatically informed the public that many repressive, terrible nations actually “misuse terrorism laws to prosecute and imprison journalists.” When visiting Ethiopia in 2012, U.S. Deputy Secretary of State William Burns publicly disclosed that in meetings with that nation’s officials, the United States “express[ed] our concern that the application of anti-terrorism laws can sometimes undermine freedom of expression and independent media.” The same year, the State Department reported that Burundi was prosecuting a journalist under terrorism laws.

It should surprise nobody that the U.K. is not merely included in, but is one of the leaders of, this group of nations which regularly wages war on basic press freedoms. In the 1970s, British journalist Duncan Campbell was criminally prosecuted for the crime of reporting on the mere existence of the GCHQ, while fellow journalist Mark Hosenball, now of Reuters, was forced to leave the country. The monarchy has no constitutional guarantee of a free press. The UK government routinely threatens newspapers with all sorts of sanctions for national security reporting it dislikes. Its Official State Secrets Act makes it incredibly easy to prosecute journalists and others for disclosing anything which political officials want to keep secret. For that reason, it was able to force the Guardian to destroy its own computers containing Snowden material precisely because the paper’s editors knew that British courts would slavishly defer to any requests made by the GCHQ to shut down the paper’s reporting.

That such repressive measures come from British political culture is to be expected. The political elite of that country cling desperately to 17th century feudal traditions. Grown adults who have been elected or appointed to nothing run around with a straight face insisting that they be called “Lord” and “Baroness” and other grandiose hereditary titles of the landed gentry. They bow and curtsey to a “Queen”, who lives in a “palace”, and they call her sons “Prince”. They embrace a wide range of conceits and rituals of a long-ago collapsed empire. The wig-wearing presiding judge who issued this morning’s ruling equating journalism with terrorism is addressed as “Lord Justice Laws”, best known for previously approving the use of evidence to detain people that had been derived from torture at Guantanamo (he can be seen here).

None of this behavior bears any relationship to actual reality: it’s as though the elite political class of an entire nation somehow got stuck in an adolescent medieval fantasy game. But the political principles of monarchy, hereditary entitlement, rigid class stratification, and feudal entitlement embedded in all of this play-acting clearly shape the repressive mentality and reverence for state authority which Her Majesty’s Government produces. That journalism disliked by the state can be actually deemed not just a crime but “terrorism” seems a natural by-product of this type of warped elite mindset, as does the fact that much of the British press led the way in demanding that the Guardian’s journalism be criminalized (not unlike how many members of the American media have become the most devoted defenders of the NSA and have taken the lead in demonizing the journalistic transparency brought to that and other government agencies).

As we made clear along ago, the obvious objective of these attacks – to intimidate the journalists working on this story and deter future disclosures – will remain completely unfulfilled. Since David’s detention and the compelled destruction of the Guardian’s computers, there have been a spate of top secret GCHQ documents reported on and published around the world: many of which, to its credit, have been published by the Guardian itself.

They include detailed reports on GCHQ’s attempts to compromise basic encryption methods used to safeguard internet security, the GCHQ’s role in spying on the Brazilian oil company Petrobras, the GCHQ’s targeting of UN charities and officials, the GCHQ’s use of “dirty tricks” including “honey traps” and fake victim blog posts, the GCHQ’s attacks on “hactivists”, GCHQ’s surveillance of YouTube and Blogger activity  and related activities tocovertly influence internet discourse, GCHQ’s surveillance through phone apps such as “Angry Birds”, and – just yesterday – GCHQ’s covert monitoring of visitors to the WikiLeaks website. Needless to say, there is much more GCHQ reporting to do, and nothing about today’s ruling – or anything else the U.K. Government can do – will stop that.

It is not difficult to apprehend the reason the U.K. government is so desperate to criminalize this reporting. The GCHQ itself made the reason clear in a once-secret memo previously reported by the Guardian. The British agency “has repeatedly warned it fears a ‘damaging public debate’ on the scale of its activities because it could lead to legal challenges against its mass-surveillance programmes.” Among other things, “GCHQ feared a legal challenge under the right to privacy in the Human Rights Act if evidence of its surveillance methods became admissible in court.” In particular, the spying agency feared that disclosures “could lead to damaging public debate which might lead to legal challenges against the current regime.” Privacy groups have now commenced such lawsuits against the GCHQ.

In sum, the U.K. Government wants to stop disclosure of its mass surveillance activities not because it fears terrorism or harm to national security but because it fears public debate, legal challenges and accountability. That is why the U.K. government considers this journalism to be “terrorism”: because it undermines the interests and power of British political officials, not the safety of the citizenry. I’ve spent years arguing that the word “terrorism” in the hands of western governments has been deprived of all consistent meaningother than “that which challenges our interests”, and I never imagined that we would be gifted with such a perfectly compelling example of this proposition.

As David told The Intercept this morning, he intends to appeal this ruling, and to keep appealing it, until the end if necessary – up to the highest UK court and then to the European Court of Human Rights – not because he cares what the British Government calls him, but because of the press freedoms at stake. But whatever the outcome, the reporting will continue as aggressively as ever no matter how many threats are made by the British (or American) governments to prosecute.

Glenn Greenwald is a journalist, constitutional lawyer, commentator, author of three New York Times best-selling books on politics and law, and a staff writer and editor at First Look media. His fifth book, No Place to Hide, about the U.S. surveillance state and his experiences reporting on the Snowden documents around the world, will be released in April 2014. Prior to his collaboration with Pierre Omidyar, Glenn’s column was featured at Guardian US and Salon.  His previous books include: With Liberty and Justice for Some: How the Law Is Used to Destroy Equality and Protect the Powerful,  Great American Hypocrites: Toppling the Big Myths of Republican Politics,  A Tragic Legacy: How a Good vs. Evil Mentality Destroyed the Bush Presidency, and How Would a Patriot Act? Defending American Values from a President Run Amok. He is the recipient of the first annual I.F. Stone Award for Independent Journalism.