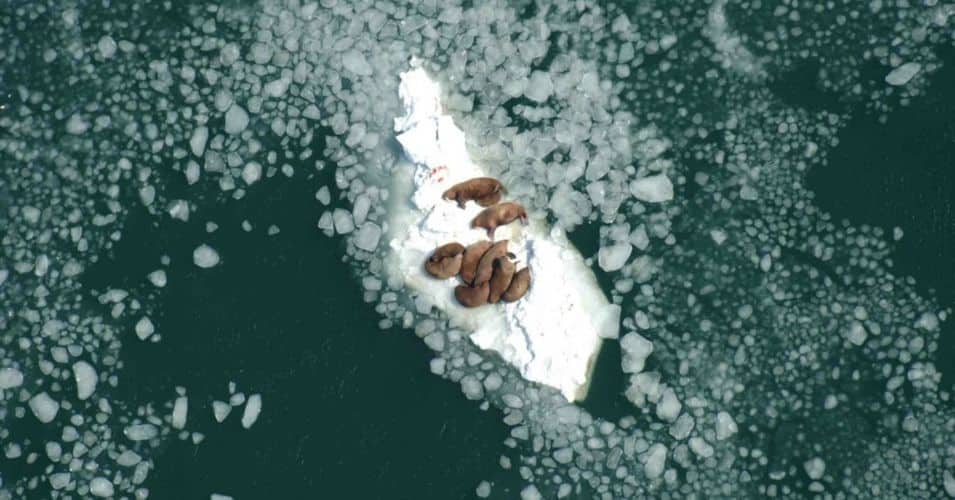 President Obama is visiting Alaska this week — a territory changing as rapidly as any on earth thanks to global warming. He’s talking constantly about the danger that climate change poses to the planet (a welcome development given that he managed to go through virtually the entire 2012 election without even mentioning it). And everything he’s saying is right: we are a nation, and a planet, beset by fire, flood, drought. It’s the hottest year in earth’s recorded history. July was the hottest month ever measured on planet earth.

But of course the alarm he’s sounding is muffled by the fact that earlier this year he gave Shell Oil a permit to go drill in the Arctic, potentially opening up a giant new pool of oil.

To most of us this seems like a contradiction. But to the political mind it doesn’t, not really. In fact, here’s how David Balton, the State Department’s diplomat for ocean issues, explained it. On the one hand, he said, the idea that we should stop all Arctic drilling was “held by a lot of Americans. It’s not a radical view.” On the other hand, “there are plenty of people on the other side unhappy that areas of the Arctic, and areas on land, have been closed to hydrocarbon development by the very same president.”

So — and here’s the money quote — “Maybe that means we’re in the right place, given that people on both sides are unhappy with us.”

Maybe. But probably not. Because here’s the thing: Climate change is not like most of the issues politicians deal with, the ones where compromise makes complete sense.

Down the hall from Balton’s office at the State Department, he has some colleague negotiating the Iran nuclear deal. By its very nature, a deal has two sides and you meet somewhere in the middle — to insist that Iran get nothing in return for giving up their nukes would be to kill the very idea of negotiations. That’s true in most encounters. If I want $30 an hour to work for your fast food restaurant, and you’d just as soon use slaves, then $15 an hour represents a workable compromise. We can come back in 5 years and negotiate some more. Be reasonable. One step at a time. Zealots make bad policy.

Earlier this year, before Obama made his decision to let Shell go a’drilling, a team of scientists published a key paper in one of the planet’s most rigorous scientific journals,Nature. After extensive calculation of the atmosphere’s carbon concentration, these scientists listed the deposits of coal, oil and gas we had to leave alone if we wanted to keep climate change from going past the 2 degree Celsius red line set by the planet’s nations, a target solemnly agreed to by…President Obama at the climate talks in Copenhagen in 2009. Here’s what those scientists said: “development of resources in the Arctic and any increase in unconventional oil production are incommensurate with efforts to limit average global warming to 2 °C.”

In this case, the scientists are serving as proxies for physics. They’re not expressing an opinion; they’re reporting on the world’s actual limits. It’s as if physics is saying, “I’munhappy with this situation.” Or…not unhappy.

Now, presidents can’t do everything physics demands on climate change. For one thing, Republicans get in the way. And for another we obviously can’t shut down all use of fossil fuels overnight, though in terms of climate change that would be smart. All we can do is move as quickly as possible towards a renewable future. Which is precisely why we shouldn’t even consider opening up a vast new pool of oil, one that we won’t even be able to tap for 10 or 20 years. When you’re in a hole the first rule is stop digging — and yet we’ve just given Shell a giant shovel.

The point is, we’ve got to stop pretending. The idea that you’re doing the right thing when you meet in the middle is, in this case, a dangerous delusion. It’s as if King Solomon had really wanted to cut the baby in half; some things simply can’t be split down the middle.

Which is why the rest of us need to join the scientists. Lots of people are trying. Here are some kayaktivists in Seattle in June, trying to block Shell’s big drilling rig: 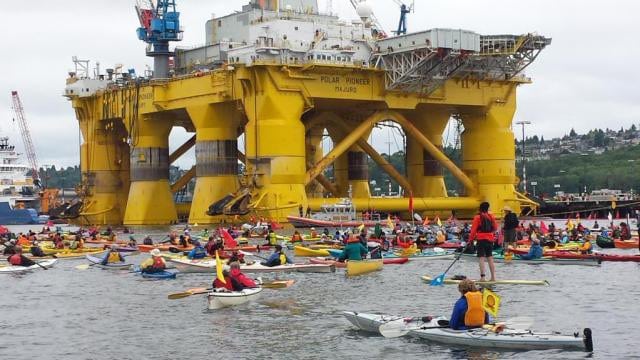 But you don’t need a kayak to participate. If you wanted to do something right now, you could add your name here. Or you could send the president a note here. Maybe you could just sign it, “Sincerely, Physics.”

Bill McKibben is the Schumann Distinguished Scholar at Middlebury College and co-founder of 350.org. His most recent book is Eaarth: Making a Life on a Tough New Planet.