Peninsula Peace & Justice Center presents a conversation with Robert Scheer, author and journalist, and Aleecia McDonald, fellow at the Stanford Center for Internet and Society, hosted by Paul George, Director of PPJC. Scheer is the author of the new book “They Know Everything About You, How Data-Collecting Corporations and Snooping Government Agencies Are Destroying Democracy.”

Robert Scheer, former national affairs correspondent and columnist for the Los Angeles Times, is the editor-in-chief of the Webby Award-winning online magazine Truthdig and professor at the University of Southern California’s Annenberg School for Communication and Journalism. Scheer is also a co-host of the weekly political radio program “Left, Right & Center” on KCRW, the National Public Radio affiliate in Santa Monica, California. He is the author, most recently, of The Pornography of Power and The Great American Stickup.

Aleecia M. McDonald is a Non-Resident Fellow at Stanford’s Center for Internet & Society. Her research focuses on the public policy issues of Internet privacy, and includes user expectations for Do Not Track, behavioral economics and mental models of privacy, and the efficacy of industry self regulation. She co-chaired, and remains active in, the WC3’s Tracking Protection Working Group. Aleecia’s decade of experience working in software startups adds a practical focus to her academic work. She holds a PhD in Engineering & Public Policy from Carnegie Mellon where she studied online privacy. Her findings have been featured in media outlets such as the Washington Post and Ars Technica.

Paul George has been the Director of Peninsula Peace and Justice Center for 25 years and has been a grassroots peace and human rights organizer and activist his entire adult life. Paul has worked as a political organizer for the largest health care workers union in the western US and as a solidarity activist, which led to extensive travels in war-torn El Salvador and Nicaragua. He is the host of the award-winning Other Voices TV program and was a community radio talk show host for nearly a decade. He is a popular public speaker, addressing a wide range of issues. 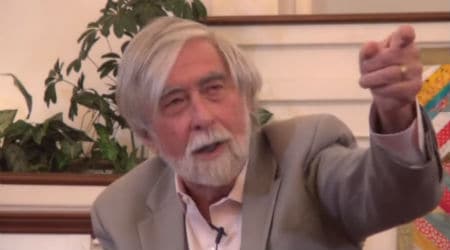