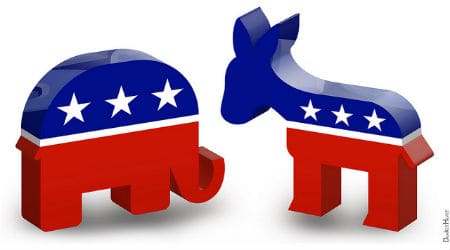 To understand why the United States fails so miserably in efforts to achieve an Israeli/Palestinian peace, all you need to do is take a look at the mix of bad policy and bad politics found in the Israel/Palestine sections of platforms of both the Republican and Democratic parties.

The Republican document is particularly extreme, even bizarre. Finding opportunities to mention Israel in five different sections, the GOP platform: refers to Israel as “beacon of democracy and humanity”; claims that “support for Israel is an expression of Americanism”; “recognizes Jerusalem as the eternal and indivisible capital of the Jewish state and calls for the American embassy to be moved there; terms the BDS movement “anti-Semitic; “rejects the faulty notion that Israel is an occupier”; and calls for “an immediate halt to all U.S. funding” to entities that admit the Palestinians as a “member state”—singling out the UN Framework Convention on Climate Change (UNFCCC).

Because the GOP platform committee specifically rejects any reference to either two states or to recognition of Palestinians as a people, the only time Palestinians are even mentioned in the document is in the context of the funding cut proposed for the UNFCCC.

The Democrats’ platform, though weak, is clearly more sober. They, too, find the need to shower excessive unwarranted praise on Israel, claiming that “a strong and secure Israel is vital to the United States because we share overarching strategic interests and the common values of democracy, equality, tolerance, and pluralism.” The Democrats also “oppose any effort to delegitimize Israel, including at the UN or through the BDS movement.” And, in a weirdly contradictory formulation, the platform both recognizes that Jerusalem is a “matter for final status negotiations,” while at the same time insisting that “it should remain the capital of Israel, an undivided city accessible to people of all faiths.”

Finally, while rejecting efforts to include language calling for an end to the occupation and illegal settlements (claiming that these terms “prejudge” issues to be decided in negotiations!), the Democrats, nevertheless, pledge to “continue to work toward a two-state solution of the Israeli-Palestinian conflict negotiated directly by the parties that guarantees Israel’s future as a secure and democratic Jewish state with recognized borders and provides the Palestinians with independence, sovereignty, and dignity.”

Republicans wrote their document haunted by billionaire Sheldon Adelson and threats from far-right evangelical Christians. Their candidate, Donald Trump, after early on suggesting that he would “be neutral” and work to earn the trust of both Israelis and Palestinians, has clearly been chastened. He now relies on the counsel of his hardline pro-Israel son-in-law (the author of Trump’s AIPAC speech).

For their part, the Democrats wrote their language influenced by one of their own billionaires, Haim Saban (a strong BDS opponent, who secured a written anti-BDS pledge from Hillary Clinton), and haunted by their mistaken fear of “losing votes” (their code, not mine, for Jewish voters).

The Democrats’ platform claims to want two states and supports “independence, sovereignty, and dignity” for Palestinians. This aspiration is commendable, but when they reject terming Israeli control over Palestinians an occupation and refuse to call for an end to settlements, they give little hope to Palestinians that action will be taken to fulfill their aspirations.

The bottom line is that both platforms are bad policy. If the GOP platform were followed, it would produce policies resulting in disaster, not only for Palestinians and U.S. interests in the Middle East, but for Israel, as well. On the other hand, if the Democrats’ platform were followed, it would result in continuing the region’s depressing and dangerous downward spiral of oppression and violence.

If the platforms’ policies are bad or weak, so too are the political calculations that went into writing them — especially for Democrats. The so-called “political fear” that drives Democrats to shy away from criticism of Israeli policies ignores the very real shifts that have occurred in the attitudes of the electorate. Polls show that: despite the fact that Israel retains a higher approval rating than the Palestinians, by a margin of 65 percent to 14 percent American voters believe that Israelis and Palestinians deserve equal rights.

Attitudes have clearly changed, especially among Democratic voters. For example, a strong plurality of Democrats (more than 2 to 1) want settlements to end, believe the U.S. must “get tough with Israel” to force them to stop construction, and feel that boycotts are a legitimate tool that can be used to pressure Israel to end its settlement program. And a plurality of all voters, Democrats, Republicans, and Independents, feel that Israel currently receives too much U.S. aid.

It is also clear from polls and from the rapid growth and impact of groups like J Street and Jewish Voice for Peace that speaking the truth about Israeli policies will win and not lose the support of a substantial majority of Jewish voters.

Republicans are calling their document the “strongest pro-Israel platform, ever,” while Democrats are terming their language on Israel/Palestine the “most progressive, ever.” In a sense, both are right. The problem is that I know Israeli peace activists who would seriously question the GOP claim and I know Palestinians who are deeply disappointed with the Democrats’ final product.

James J. Zogby is the president of the Arab American Institute.