Oiling the War Machinery, From Oslo to Heathrow to Washington

In Oslo, the world’s most important peace prize has been hijacked for war.

In London, government authority has just fired a new shot at freedom of the press.

And in Washington, the Obama administration continues to escalate its attacks on whistleblowers, journalism and civil liberties. 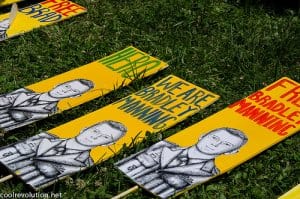 As a nation at peace becomes a fading memory, so does privacy. Commitments to idealism — seeking real alternatives to war and upholding democratic values — are under constant assault from the peaks of power.

Last week, I met with the Research Director of the Nobel Committee at its headquarters in Oslo. We sat at one end of a long polished conference table, next to boxes of petitions signed by 100,000 people urging that the Nobel Peace Prize go to Bradley Manning.

The Nobel official, Asle Toje, remained polite but frosty when I urged — as I had two hours earlier at a news conference — that the Nobel Committee show independence from the U.S. government by awarding the Peace Prize to Manning. Four years after the prize went to President Obama, his leadership for perpetual war is incontrovertible — while Manning’s brave whistleblowing for peace is inspiring.

In recent times, I pointed out, the Nobel Peace Prize has gone to some dissenters who were anathema to their governments’ leaders — but not to any recipient who profoundly displeased the U.S. government. Toje responded by mentioning Martin Luther King Jr., a rejoinder that struck me as odd; King received the prize 49 years ago, and more than two years passed after then until, in April 1967, he angered the White House with his first full-throated denunciation of the Vietnam War.

I motioned to the stacks of the petition, which has included personal comments from tens of thousands of signers — reflecting deep distrust of the present-day Nobel Peace Prize, especially after Obama won it in 2009 while massively escalating the U.S. war effort in Afghanistan.

We were in the grand and ornate building that has housed the Nobel Committee for more than a hundred years. Outside, a bust of Alfred Nobel graces the front entrance, and just across a small traffic circle is the U.S. Embassy, an imposing dark gray presence with several stories, hundreds of windows on each of its three sides and plenty of electronic gear on its roof. (That intersection is widely understood to be a base for American surveillance operations.) More than ever in recent years, the Norwegian Nobel Committee building’s physical proximity to the U.S. Embassy is an apt metaphor for its political alignment.

Over the weekend, the British government showed more toxic aspects of its “special relationship” with the U.S. government. As the Guardian reported, “The partner of the Guardian journalist who has written a series of stories revealing mass surveillance programs by the U.S. National Security Agency was held for almost nine hours on Sunday by UK authorities as he passed through London’s Heathrow Airport on his way home to Rio de Janeiro.” David Miranda, who lives with Glenn Greenwald, “was held for nine hours, the maximum the law allows before officers must release or formally arrest the individual. … Miranda was released, but officials confiscated electronics equipment including his mobile phone, laptop, camera, memory sticks, DVDs and game consoles.”

Assaulting press freedom is part of a comprehensive agenda that President Obama is now pursuing more flagrantly than ever. From seizing phone records of AP reporters to spying on a Fox News reporter to successfully fighting for a federal court decision to compel reporter James Risen to reveal his source for a New York Times story, Obama’s war on journalism is serving executive impunity — for surveillance that fundamentally violates the Fourth Amendment and for perpetual war that, by force of arms and force of example, pushes the world into further bloody chaos.

The destructive effects of these policies are countless. And along the way, for the Nobel Committee, more than ever, war is peace. Across the globe, aligned with and/or intimidated by official Washington, many governments are enablers of an American warfare/surveillance multinational state. And in Washington, at the top of the government, when it comes to civil liberties and war and so much more, the moral compass has gone due south.