Posted on May 18, 2015 Posted By: PPJC Admin2 Categories: Current News 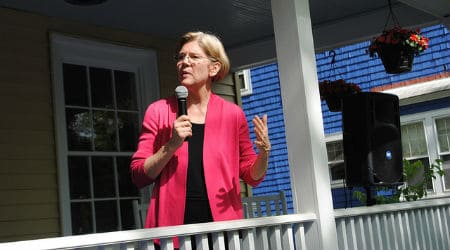 Well, this is awkward. A few days ago President Obama literally laughed off Sen. Elizabeth Warren’s concern that his so-called “fast track” provision, which would limit Congressional power regarding trade deals for the next six years, endangers 2010’s Dodd/Frank financial reforms.

“I’d have to be pretty stupid” to sign an agreement that did that, the President said. He wasreportedly laughing as he said it.

As we were saying: awkward.

Many well-informed observers have echoed Warren’s concerns, including Nobel Prize-winning economist Joseph Stiglitz. “The president is making some fairly nasty remarks about people on the other side, that they don’t understand we’re in the 21st century,” said Stiglitz. “Actually, we do. I don’t think he understands what’s happened in the last third of a century.”

Another critic was Simon Johnson, former chief economist of the International Monetary Fund, who wrote that “Senator Warren is entirely correct.”

In fact, the White House appears to be playing word games when it insists that, as paraphrased by Politico’s Ben White, “the fast-track bill currently before Congress includes language that expressly forbids changing U.S. law without congressional action.” That may technically be true. But, by lowering the bar for Senate ratification of trade deals, it makes it easier to pass provisions that would change U.S. law.

Did the president and his team make a mistake in promoting fast-track, or did they knowingly back a provision that could undermine financial reform? Johnson rather convincingly concludes that “the latter, unfortunately, seems more likely.”

Despite these well-informed objections, President Obama isn’t content to merely rebut Warren’s criticism. He has also been attacking her in gratuitously personal terms and was, in the words of interviewer Matt Bai, “unusually irritated” when asked about her objections.

“The truth of the matter is that Elizabeth is, you know, a politician like everybody else,” Obama told Bai. “And you know, she’s got a voice that she wants to get out there … (but) her arguments don’t stand the test of fact and scrutiny.”

Fast-track isn’t the only part of the president’s trade initiative that threatens American laws. A provision in past trade treaties, and which reportedly is also included in TPP, cedes enormous power to secret, corporate-backed extrajudicial “courts.” It’s called Investor-State Dispute Resolution (ISDS).

Warren explained how ISDS works: “… highly paid corporate lawyers … go back and forth between representing corporations one day and sitting in judgment the next.” She told Greg Sargent of The Washington Post that ISDS “doesn’t directly tell countries to repeal regulations. It imposes a financial penalty, which has caused countries to change their regulations…”

The president claims he has improved ISDS, but he won’t release the text of the treaty to prove it. Warren’s response: “I’ve sat with many legal scholars to talk about this issue, and I have not seen a draft that would do what the president says he has already accomplished.”

Warren has provided some excellent examples of the ISDS in action: a French company that sued Egypt after Egypt raised its minimum wage; a Swedish company that filed a complaint against Germany because it wanted to phase out nuclear power; a Dutch company that sued the Czech Republic for not bailing out a bank it partially owned; and Philip Morris suing countries for attempting to reduce smoking rates.

Only corporations can use ISDS. Unions can’t sue for labor abuses, for example, and NGOs can’t sue for actions that damage the health or well-being of the public.

“They’re making this stuff up,” he added. “This is just not true.”

But it is true. That’s why the Canadian complaint is so poorly timed for the president. UnderChapter 11 of NAFTA, Canadian banks can sue the U.S. government for compensation as long as the Volcker Rule remains in place.

While the outcome of such a hearing can’t be known for certain, here’s what we do know: The hearing would use corporate attorneys as “judges,” it would take place outside our judicial system, and its proceedings would remain a secret from the public.

Similar challenges could be filed against our country’s environmental, labor, and safety regulations. And yet, the president insists that “no trade agreement is going to force us to change our laws.”

In another uncharacteristically heated rant, the president said that it “gets on his nerves” when critics like Warren describe the TPP as a “secret deal.”

But when Politico – a D.C.-based, determinedly apolitical publication – runs a headline reading, “Extreme secrecy eroding support for Obama’s trade pact,” it’s probably fair to say the deal has a secrecy problem. Elected officials told Politico that those who view the document (in a secure basement room) aren’t even allowed to discuss it afterwards.

“It’s like being in kindergarten,” said Rep. Rosa DeLauro (D-Conn.).

“My chief of staff who has a top secret security clearance can learn more about ISIS or Yemen than about this trade agreement,” said Rep. Bill Doggett (D-Texas).

No discussion of this deal’s impact on the Democratic Party would be complete without mentioning the party’s leading presidential candidate, Hillary Clinton. Clinton is on record as having opposed the ISDS process, writing in her book “Hard Choices” that “we should avoid some of the provisions sought by business interests, including our own, like giving them or their investors the power to sue foreign governments …”

But Clinton has remained steadfastly, pointedly silent on fast track and the TPP. Warren may have been attempting to draw her out with an item on her website entitled “I Agree With Hillary Clinton,” since Clinton should presumably be challenging the president if she still feels that way.

There is more than a hint of cynicism in Obama’s attempts to characterize Warren, not just as a self-promoting “politician,” but as a law professor baffling the public with legalese. “She and I both taught law school,” Obama told Bai, “and you know, one of the things you do as a law professor is you spin out hypotheticals.”

But any objection to an as yet unsigned deal must, by definition, remain “hypothetical.” And the president has forced opponents to speculate by shrouding this deal in secrecy.

The war for the TPP and fast-track – and against Warren – is not the only one the president is currently waging. Obama is also in the process of shaping his presidential legacy. That may be why he’s “unusually irritated” with Warren and other progressives. He may recognize that he is at risk of being remembered as a president who, when the nation stood at an economic crossroads, cast his lot with the corporations.

The president’s Wall Street legacy has already been largely shaped by two actions: the bank bailout, and his administration’s refusal to prosecute individual bankers for acts of widespread fraud. Even now, eight years after that fraud brought down the economy, the government continues to reach settlement agreements that protect big banks from the consequences of their criminal actions. (The latest reported deal, involving the criminal manipulation of currency exchange rates, is a case in point.)

Now the president is staking his reputation on a trade deal that is increasingly likely to be seen as a joint Obama/GOP initiative. If he succeeds, his legacy may suffer a mortal blow, and his party is likely to pay a terrible political price in years – and elections – to come.