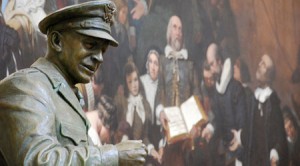 On Jan. 17, 1961, President Eisenhower used his farewell address to warn Americans that:

“We must guard against the acquisition of unwarranted influence, whether sought or unsought, by the military-industrial complex. The potential for the disastrous rise of misplaced power exists and will persist.”

As Slate has said, “with the possible exception of George Washington’s departing speech,” Eisenhower’s speech may be “the best-known presidential farewell address in U.S. history.” (An argument could be made, of course, for President Nixon’s good-bye as well.)

Tomorrow — Jan. 17, 2014 — President Obama will announce the changes he does and does not want to see in the National Security Agency’s surveillance programs. His speech will come after more than six months’ worth of debate about the NSA’s programs and how they do or don’t trample on civil liberties. The debate has been sparked by the leaks from former NSA contractor Edward Snowden. Obama is expected to endorse some, but not all, of an independent panel’s recommendations about scaling back NSA’s efforts.

As USA Today says, Obama “picked an interesting date … and not just because it is wife Michelle’s 50th birthday.”

“Ike’s 1961 speech,” USA Today continues, “has echoed over most subsequent disputes over American power: Vietnam, Watergate, revelations of assassination plots and overthrows of other governments, Iran-Contra, the first Gulf War, the response to 9/11, the second Iraq war — and disclosures over National Security Agency surveillance policies.”

With the anniversary of Eisenhower’s address and the day for Obama’s speech coinciding, we thought it would be interesting to look back at what Ike said to the nation.

The transcript of his address is here. Here’s an excerpt that zeroes in on his thoughts about the military-industrial complex:

“Until the latest of our world conflicts, the United States had no armaments industry. American makers of plowshares could, with time and as required, make swords as well. But now we can no longer risk emergency improvisation of national defense; we have been compelled to create a permanent armaments industry of vast proportions. Added to this, three and a half million men and women are directly engaged in the defense establishment. We annually spend on military security alone more than the net income of all United States corporations.

“This conjunction of an immense military establishment and a large arms industry is new in the American experience. The total influence-economic, political, even spiritual — is felt in every city, every state house, every office of the federal government. We recognize the imperative need for this development. Yet we must not fail to comprehend its grave implications. Our toil, resources and livelihood are all involved; so is the very structure of our society.

“In the councils of government, we must guard against the acquisition of unwarranted influence, whether sought or unsought, by the military-industrial complex. The potential for the disastrous rise of misplaced power exists and will persist.

“We must never let the weight of this combination endanger our liberties or democratic processes. We should take nothing for granted. Only an alert and knowledgeable citizenry can compel the proper meshing of the huge industrial and military machinery of defense with our peaceful methods and goals, so that security and liberty may prosper together.”

C-SPAN’s online archives have video of Eisenhower’s address. We’ll embed both the full 16 minutes and a shorter clip we created that focuses on his comments about the military-industrial complex.