Obama May Have Just Given up on Russia for Good 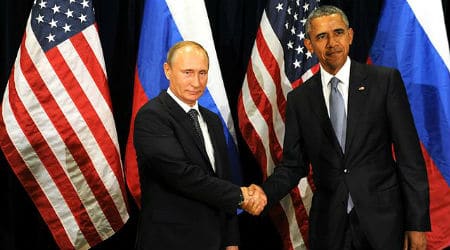 Monday could end up being remembered as the moment when the years-long deteriorating relationship between the United Sates and Russia went from terrible to unsalvageable.

First, the State Department finally followed through on days of threats by Secretary of State John Kerry, announcing that the U.S. is suspending its participation in talks with Russia to try to establish a ceasefire in Syria. Those discussions were supposed to eventually lead to jointly coordinated strikes against ISIS and other terrorist groups. This comes after days of punishing Russian and regime airstrikes on rebel-held areas of Aleppo, including several bombings of hospitals and one on a humanitarian aid convoy. According to the State Department, these attacks demonstrated that Russia was always more committed to propping up Assad’s regime than reaching a political solution—something that has been clear to most observers for some time.

Russia, meanwhile, recently accused the U.S. of supporting and controlling an “international terrorist alliance” through its backing of anti-Assad rebel groups.

Also on Monday, Russian President Vladimir Putin suspended a treaty with the U.S. on the disposal of plutonium, negotiated by Secretary of State Hillary Clinton and her Russian counterpart Sergei Lavrov in 2010. The draft law halting the treaty, which Putin submitted to Russia’s parliament, calls on Washington to lift Ukraine-related sanctions and to reduce the U.S. military presence in NATO member states in Eastern Europe.

The day’s events serve as a sad bookend to the fraught but occasionally productive era that began when then Secretary of State Clinton presented a mistranslated “reset” button to her Russian Lavrov on March 6, 2009. CONTINUE READING AT SLATE