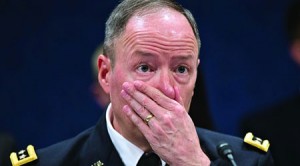 [Ed. Note: Robert Scheer will be speaking in Palo Alto on November 8.]

Now we know that even the president needs leaks from Edward Snowden to be fully informed about the dastardly acts of his own top spy agency. It was Snowden’s recent revelations that led Obama to order an investigation into spying on private communications of 35 world leaders, including our closest allies, a clear betrayal of the trust needed to establish a more peaceful world.

According to a Wall Street Journal account from senior U.S. officials, the president had been kept in the dark as to the extent of the NSA spy program: “President Barack Obama went nearly five years without knowing his own spies were bugging the phones of world leaders. Officials said the NSA has so many eavesdropping operations under way that it wouldn’t have been practical to brief him on all of them. They added that the president was briefed on and approved of broader intelligence-collection ‘priorities,’ but that those below him make decisions about specific intelligence targets.” Huh?

So it’s beneath the president’s pay grade to approve a decision on bugging the phones of most of the free world’s leaders, and the president didn’t know this was going on until Snowden leaked it? Yes, NSA spokeswoman Vanee Vines confirmed, employing the finest of bureaucratic gobbledygook: “The agency’s activities stem from the National Intelligence Priorities Framework, which guides prioritization for the operation, planning and programming of U.S. intelligence analysis and collection.”

On Sunday, Vines added the reassuring news that the report in the German newspaper Bild alleging that President Obama personally authorized the tapping of German Chancellor Angela Merkel’s phone back in 2010 was false. In any case, we already know, thanks again to information Snowden provided to another German publication, Der Spiegel, that the monitoring of Merkel’s cellphone began back in 2002, when George W. Bush would have been the president the NSA kept out of the loop.

Surely Bush would not have approved spying on the leader of a nation that supported his unjustifiable invasion of Iraq and long has been credited with supplying Washington with credible information on al-Qaida. Maybe the NSA just wanted to make sure that Merkel got home safely from some late night diplomatic soiree.

In any case, the administration has confirmed that the president has declared Merkel’s cellphone an eavesdrop-free zone and is re-evaluating the taping of phone calls of other free world heads of state. But what about the rights of ordinary folks like those in Spain, where 60 million phone calls were monitored in a single month, according to another of Snowden’s indispensable leaks?

This is a double standard protecting leaders but not their subjects, fully endorsed by Sen. Dianne Feinstein, who has previously supported the NSA’s vast spying on Americans and people throughout the world. However, Feinstein announced Monday that “with respect to NSA collection of intelligence on leaders of U.S. allies—including France, Spain, Mexico and Germany—let me state unequivocally: I am totally opposed.”

Senate Intelligence Committee Chairman Feinstein, who has often invoked her commanding knowledge of the scope of NSA surveillance programs, now suddenly confesses to having been completely duped:

She got that right, and the fact of the matter is that she was clued in only thanks to the public service performed by Snowden in exposing the NSA’s despicable behavior. In June, Feinstein rushed to condemn Snowden as a traitor, saying, “I don’t look at this as being a whistle-blower. I think it’s an act of treason. … He violated the oath. He violated the law. It’s treason.” She should now apologize to Snowden for honoring his oath to protect the Constitution.

But what of Feinstein’s dishonoring the Constitution? If Feinstein is “totally opposed” to the surveillance of foreign leaders, why has she given a blank check for such surveillance of most Americans, violating their rights under the Fourth Amendment to the U.S. Constitution that she has taken an oath to defend? That’s a question that also ought to be answered by the president, who should welcome Snowden back to his country and give him the Medal of Freedom for his public service.