OBAMA AND THE WAR ON TERROR 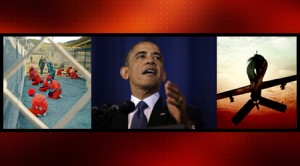 Did the President’s National Security Speech Really Change Anything?

On May 23, President Barack Obama gave a major policy speech on the so-called war on terror. It was, on the surface at least, a clear and welcome call for a change. It was also clear that Obama was responding to tremendous public pressure to end the policies of his reviled predecessor, something he has failed to do thus far. But how far does his new policy outline go toward actually ending the perpetual war that has gripped our nation since 9/11? And what might the actual new national security program look like? In this talk, our speaker will dig deep into the President’s address, keeping the historic context in mind, to find out if our country’s endless war might actually be ending.

Paul George has been a grassroots human rights activist and organizer for over 40 years. He is the director of Peninsula Peace and Justice Center, the Peninsula’s leading activist organization. Paul is a frequent public speaker on a range of topics. Audiences have been enthusiastic about his sharp analyses and clear explanations of complex national policies.