This week, the Nobel Prize for economics may have gone to three academics, but the real work of fixing our local economies was happening on the ground—as part of New Economy Week. 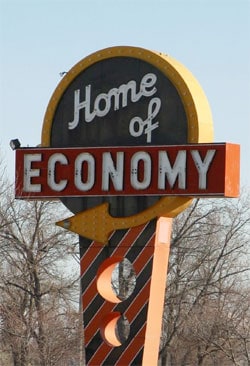 The winners of the so-called Nobel Prize for economics were announced this week, and what a peculiar pick: The three who will share the award this year sit on two diametrically opposed sides of their field’s most critical debate.

Are markets magic, efficient, rational, and in need of no regulation? Or are they irrational, hysterical, and error-prone, like the humans who bet on them?  That’s the debate.

Splitting the prize between Eugene Fama and Lars Peter Hansen (two “magical markets” guys) and Robert Shiller (whose 1992 book,Market Volatility, was all about exactly that) is kind of like splitting the biology prize between Charles Darwin and the Tea Party Creationist Caucus. It makes no sense.

But the prize isn’t even a real Nobel. The Nobels were around for 67 years before the prize for economics was created. The economics prize was invented, in fact, by Sweden’s central bank in 1968 in a strategic attempt to bestow on the field of economics the same scientific aura and respect accorded to medicine and mathematics and physics. The Swedish bankers leaned heavily toward the magic of the markets idea: Persuade people that money matters are scientific and complicated and best left to them, and you tend to get government off your bank.

But here’s the good news: The same week that the pseudo-Nobels were announced, we saw a nationwide celebration of regular people diving into economics. This week was New Economy Week.

Day after day, people all around the country have been showing off their best ideas about stabilizing local businesses and building local democracy. They’re considering what they can do to divest from big banks and fossil fuel, and they’ve marked all their activities on a big online map.

New Economy Week is a project of the New Economy Institute and the New Economy Coalition, a group that, after only a few months, already has 51 members. The organizers’ goal was to map 40 events in one week. Halfway through, their map was peppered with 75 events in 17 states and two Canadian provinces.

“People are realizing, from a very high theoretical level to the level of the street, [that] what is being offered to them is insufficient,” Bob Massie, President and CEO of the Institute, told me. “The system’s broken.”

“New Economy groups are emerging all around the country in response to local conditions: transition towns, sustainable business networks, the cooperative movement, local first,” added Mike Sandmel, New Economy Week coordinator. “They tend to live in silos. Our goal was to lift up the bigger picture.”

In downtown Manhattan, people packed into a community media center in an old brick firehouse to watch David Brancaccio’s Fixing the Future and other films in the first-ever New Economy Film Festival.

The online publication Shareable held a “sharing cities map jam,” the kickoff action of a newSharing Cities Network.  Shareable wants local people to collaborate to map all the sharing-inclined businesses and projects in their cities.

“We believe that making these oases of sharing visible will be an empowering first step for the network,“ wrote Shareable’s Mira Luna.

What does all this national mapping mean for strong local economies?

“We talk about trans-localism” says Sandmel. “We don’t believe in doing things on a bigger scale than you need to, but we do live in an increasingly horizontal world and the new economy movement has a good chance of having an influence if it comes together.”

Coming together, talking about sharing, and meddling in money and market matters… Is it mad?  Not madder than this year’s economics prize. And if the pseudo-Nobels weren’t proof enough that something’s wrong with leaving private interests to run public affairs, there’s always Washington.

What’s more crazy: setting up a local tools library in the name of helping struggling families, or, I dunno, closing down the government?

Laura Flanders was the founder and host of GRITtv and is the author of the books BUSHWOMEN and Blue Grit. She’s the editor of At the Tea Party