Posted on May 20, 2016 Posted By: TD Daniell Categories: Current News 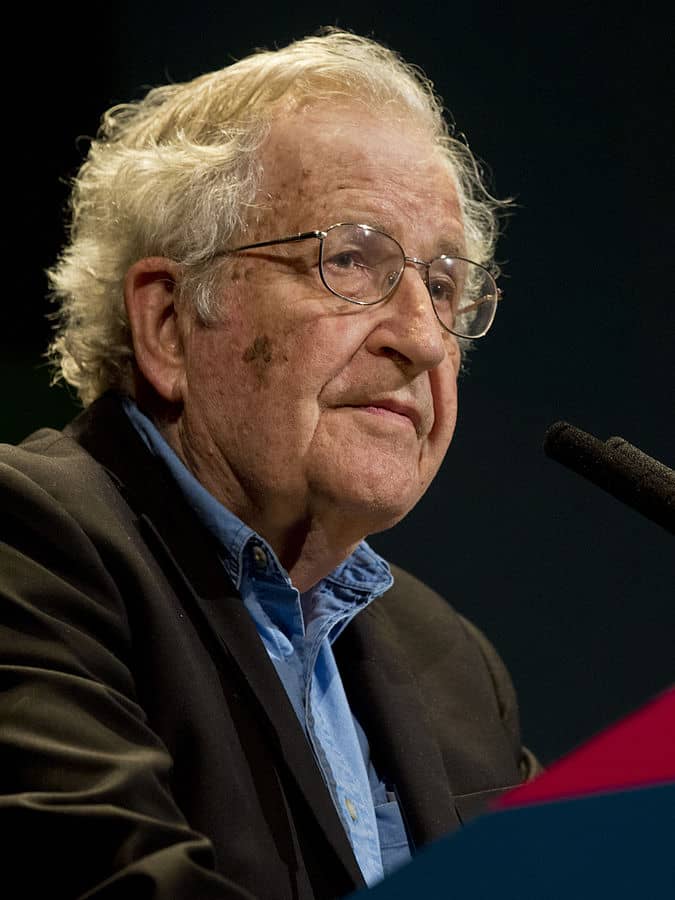 Just last month, President Obama announced the deployment of 250 more Special Operations troops to Syria in a move that nearly doubles the official U.S. presence in the country. Syria is only one of a number of ongoing deadly conflicts in the Middle East. Last year, a record 60 million people around the world were forced to flee their homes, becoming refugees. For more on these conflicts and the rise of ISIS, we continue our conversation with internationally renowned political dissident, linguist and author, Noam Chomsky. “The U.S. invasion of Iraq was a major reason in the development, a primary reason in the incitement of sectarian conflicts, which have now exploded into these monstrosities,” says Chomsky. He has written over 100 books, most recently, “Who Rules the World?” Chomsky is institute professor emeritus at Massachusetts Institute of Technology, where he’s taught for more than 50 years.

AMY GOODMAN: We’re on the road in our 100-city tour, today broadcasting from Chicago. The United States and Russia are co-chairing a meeting in Vienna today of the 17-nation International Syria Support Group aimed at easing the five-year conflict. According to a recent report by the Syrian Center for Policy Research, the death toll in Syria has reached close to half a million people, nearly twice the number counted by the United Nations a year and a half ago, when it stopped keeping track of the numbers killed because of the data’s unreliability. Just last month, President Obama announced the deployment of 250 more Special Operations troops to Syria in a move that nearly doubles the official U.S. presence in the country. Syria is only one of a number of ongoing conflicts in the Middle East. Last year, a record 60 million people around the world were forced to flee their homes, becoming refugees. Well, for more on these conflicts, from Syria to Iraq to Yemen, and the U.S. role in the ongoing violence, we continue our conversation with the internationally renowned political dissident, linguist, author, Noam Chomsky. He has written over a hundred books, most recently, Who Rules the World? Noam Chomsky is institute professor emeritus at Massachusetts Institute of Technology, where he’s taught for more than half a century. I began by asking him to talk about the conflict in Syria.

NOAM CHOMSKY: Syria is spiraling into real disaster, a virtual suicide. And the only sensible approach, the only slim hope, for Syria is efforts to reduce the violence and destruction, to establish small regional ceasefire zones and to move toward some kind of diplomatic settlement. There are steps in that direction. Also, it’s necessary to cut off the flow of arms, as much as possible, to everyone. That means to the vicious and brutal Assad regime, primarily Russia and Iran, to the monstrous ISIS, which has been getting support tacitly through Turkey, through—to the al-Nusra Front, which is hardly different, has just the—the al-Qaeda affiliate, technically broke from it, but actually the al-Qaeda affiliate, which is now planning its own—some sort of emirate, getting arms from our allies, Qatar and Saudi Arabia. Our own—the CIA is arming them. We don’t know at what level; it’s clandestine. As much as possible, cut back the flow of arms, the level of violence, try to save people from destruction. There should be far more support going simply for humanitarian aid. Those who are building some sort of a society in Syria—notably, the Kurds—should be supported in that effort. These efforts should be made to cut off the flow of jihadis from the places where they’re coming from. And that means understanding why it’s happening. It’s not enough just to say, “OK, let’s bomb them to oblivion.” This is happening for reasons. Some of the reasons, unfortunately, are—we can’t reverse. The U.S. invasion of Iraq was a major reason in the development, a primary reason in the incitement of sectarian conflicts, which have now exploded into these monstrosities. That’s water under the bridge, unfortunately, though we can make sure not to do that—not to continue with that. But we may like it or not, but ISIS, the ISIL, whatever you want to call it, does have popular support even among people who hate it. The Sunni—much of the Sunni population of Iraq and Syria evidently regards it as better than the alternative, something which at least defends them from the alternative. From the Western countries, the flow of jihadis is primarily from young people who are—who live in conditions of humiliation, degradation, repression, and want something decent—want some dignity in their lives, want something idealistic. They’re picking the wrong horse, by a large margin, but you can understand what they’re aiming for. And there’s plenty of research and studies—Scott Atran and others have worked on this and have plenty of evidence about it. And those—alleviating and dealing with those real problems can be a way to reduce the level of violence and destruction. It’s much more dramatic to say, “Let’s carpet bomb them,” or “Let’s bomb them to oblivion,” or “Let’s send in troops.” But that simply makes the situation far worse. Actually, we’ve seen it for 15 years. Just take a look at the so-called war on terror, which George W. Bush declared—actually, redeclared; Reagan had declared it—but redeclared in 2001. At that point, jihadi terrorism was located in a tiny tribal area near the Afghan-Pakistan border. Where is—and since then, we’ve been hitting one or another center of what we call terrorism with a sledgehammer. What’s happened? Each time, it spreads. By now, it’s all over the world. It’s all over Africa, Southeast Asia, South Asia, everywhere you look. Take the bombing of Libya, which Hillary Clinton was strongly in favor of, one of the leaders of, smashed up Libya, destroyed a functioning society. The bombing sharply escalated the level of atrocities by a large factor, devastated the country, left it in the hands of warring militias, opened the door for ISIS to establish a base, spread jihadis and heavy weapons all through Africa, in fact, into the Middle East. Last year, the—according to U.N. statistics, the worst terror in the world was in West Africa, Boko Haram and others, to a considerable extent an offshoot of the bombing of Libya. That’s what happens when you hit vulnerable systems with a sledgehammer, not knowing what you’re doing and not looking at the roots of where these movements are developing from. So you have to understand the—understand where it’s coming from, where the appeal lies, what the roots are—there are often quite genuine grievances—at the same time try to cut back the level of violence. And, you know, we’ve had experience where things like this worked. Take, say, IRA terrorism. It was pretty severe. Now, they practically murdered the whole British Cabinet at one point. As long as Britain responded to IRA terrorism with more terror and violence, it simply escalated. As soon as Britain finally began—incidentally, with some helpful U.S. assistance at this point—in paying some attention to the actual grievances of Northern Irish Catholics, as soon as they started with that, violence subsided, reduced. People who had been called leading terrorists showed up on negotiating teams, even, finally, in the government. I happened to be in Belfast in 1993. It was a war zone, literally. I was there again a couple of years ago. It looks like any other city. You can see ethnic antagonisms, but nothing terribly out of the ordinary. That’s the way to deal with these issues. Incidentally, what’s happening in Syria right now is horrendous, but we shouldn’t—useful to remember that it’s not the first time. If you go back a century, almost exactly a century, the end of the First World War, there were hundreds of thousands of people starving to death in Syria. Proportionally, proportional to the population, it’s likely that more Syrians died in the First World War than any other belligerent. Syria did revive, and it can revive again.