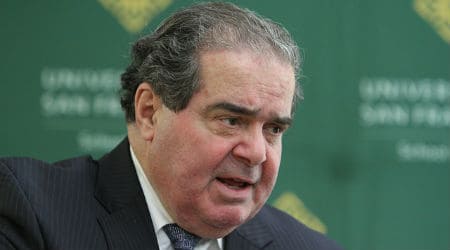 By Jim Naureckas
Fairness and Accuracy in Reporting (FAIR)

In a remark that drew muted gasps in the courtroom, Justice Antonin Scalia said that minority students with inferior academic credentials may be better off at “a less advanced school, a slower-track school where they do well.”

“I don’t think it stands to reason that it’s a good thing for the University of Texas to admit as many blacks as possible,” he added.

But part of the reason that the remark drew “muted gasps,” surely, is that that’s not what Scalia said–he didn’t say minority students “with inferior academic credentials” would be better off at worse schools, he said African-Americans in general would. Here’s the whole passage:

There are those who contend that it does not benefit African-Americans to get them into the University of Texas, where they do not do well, as opposed to having them go to a less–a slower-track school where they do well. One of the briefs pointed out that most of the black scientists in this country don’t come from schools like the University of Texas…. They come from lesser schools where they do not feel that they’re being pushed ahead in classes that are too fast for them.

He goes on to suggest that “really competent blacks” would be better off if they were “admitted to lesser schools”:

I’m just not impressed by the fact that ­­ that the University of Texas may have fewer [black students]. Maybe it ought to have fewer. And maybe some, ­­you know, when you take more, the number of blacks, really competent blacks, admitted to lesser schools turns out to be less. And I don’t think it stands to reason that it’s a good thing for the University of Texas to admit as many blacks as possible.

This is not a person talking about a subset of blacks with a particular kind of educational background; taking his words at face value, this is a person asserting that African-Americans as a whole belong in “lesser schools” that are not “too fast for them.” (Or that “there are those who contend” that that is the case, if you want to give Scalia credit for that circumlocution.)

The fact that a Supreme Court justice justifies eliminating affirmative action on the basis of openly racist views ought to be big news. By sugarcoating what Scalia actually said, the New York Times disguises that news–making the ethnic cleansing of America’s top schools a more palatable possibility. Perhaps that shouldn’t make me gasp.

Jim Naureckas is the editor of FAIR.org. Follow him on Twitter:@JNaureckas.