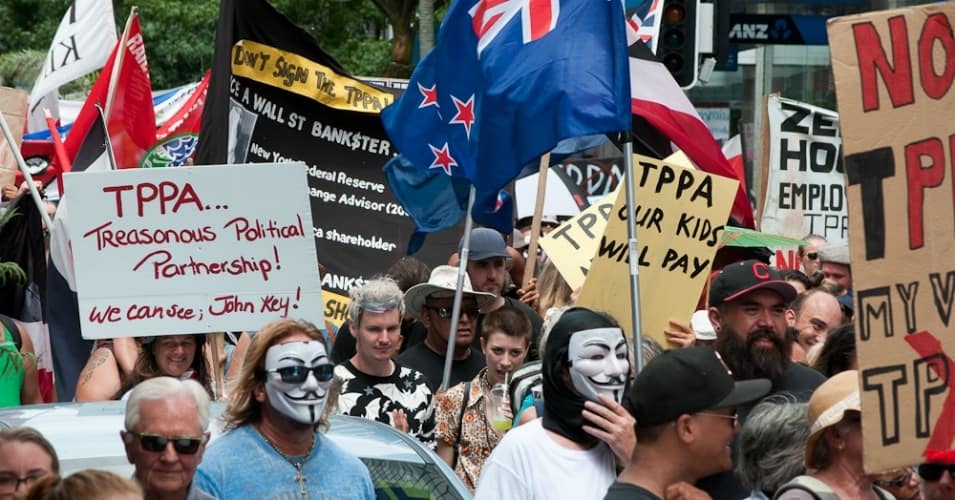 A new study confirms what many activists have suspected for a long time: The private courts set up by international “trade” deals heavily favor billionaires and giant corporations, and they do so at the expense of governments and people.

The “investor-state dispute settlement” process, or ISDS, is built into treaties like NAFTA and the upcoming Trans-Pacific Partnership (TPP). It allows foreign investors to sue participating governments if they do anything that harms their investment in that nation. Corporations can sue governments through this process, but governments can’t sue corporations.

As Todd Tucker pointed out in The Washington Post, a “wide range of policies can be challenged” under ISDS: “Argentina has had its macroeconomic policies challenged, Australia its anti-smoking efforts, [and] Costa Rica its environmental preservation laws.”

Suits are not brought through a normal, public court process. Instead, they are heard before private panels of arbitrators, often made up of attorneys who represent corporations as part of their practice. These hearings are conducted under rules set up by independent arbitration bodies that include the International Chamber of Commerce.

Report authors Gus Van Harten and Pavel Malysheuski point out that the “legitimacy” of the ISDS concept “appears to depend in part on an expectation that it benefits smaller businesses, not just large multinationals and the super wealthy.”

But that doesn’t appear to be the case. Virtually all of the financial benefits of the ISDS have gone to the rich and powerful. Nearly 95 percent of all award money went to giant corporations or extremely wealthy individuals.

The ISDS industry scored big, too. The authors found that ISDS “lawyers, arbitrators, experts and other actors” had earned an estimated $1.7 billion from these hearings by the spring of 2015.

The ISDS process has received relatively little attention in this country, perhaps because the United States has fared better than many other countries in ISDS hearings.

Reading this report, it’s not hard to understand why. Most of the countries that signed deals like NAFTA don’t have as many billion-dollar corporations and highly wealthy individuals as the United States does. As this report shows, that means their oligarchs and companies are less likely to win big through ISDS.

The Office of the U.S. Trade Representative even boasts that “foreign investors rarely pursue arbitration against the United States and have never been successful when they have done so.”

Unfortunately, that’s probably about to change. The TPP includes Japan, Australia, and other countries with their own powerful corporations and individuals. They’re much more likely to successfully challenge the U.S. under this deal, on everything from consumer safety to environmental protection. What’s more, there are signs that the U.S. could begin to lose under past agreements as well.

As a trade campaigner for Greenpeace said of a similar “trade” deal:

“This trade deal is not about trade. It’s about the transfer of power from people to big business.”

Thanks to this new report, we now have objective evidence that she’s right. These agreements have given great power to the wealthy and powerful few, at the expense of the many. It’s time to reject the TPP and renegotiate the bad deals of the past.

Richard (RJ) Eskow is a senior fellow at Campaign for America’s Future.