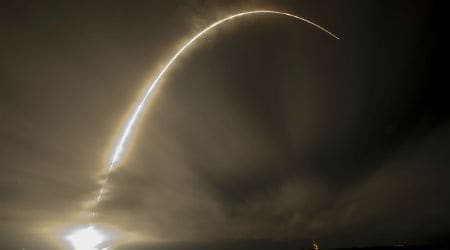 by Alex Emmons
The Intercept

Donald Trump tried to ease fears about his finger being on the nuclear button during Monday night’s presidential debate, declaring that “I would certainly not do first strike.” He added: “Once the nuclear alternative happens, it’s over.”

But moments later, the Republican presidential nominee seemed to backpedal, claiming that he “can’t take anything off the table.”

Two members of Congress don’t want Trump to have the option.

Responding to the majority of Americans who say they would not trust Trump with the nuclear arsenal, Sen. Edward Markey, D-Mass., and Rep. Ted Lieu, D-Calif., introduced legislation Tuesday that would bar the president from conducting a nuclear strike unless Congress had issued a formal declaration of war.

“Our Founding Fathers would be rolling over in their graves if they knew the President could launch a massive, potentially civilization-ending military strike without authorization from Congress,” Lieu said in a statement. “The current nuclear launch approval process, which gives the decision to potentially end civilization as we know it to a single individual, is flatly unconstitutional.”

Whatever Trump actually believes about nuclear weapons, neither Clinton nor President Obama nor any former president has ever adopted a firm “no first use” policy.

Although the Obama administration’s 2010 Nuclear Posture Review says that “the fundamental role of U.S. nuclear weapons … is to deter nuclear attack on the United States,” it leaves open the option of a preemptive strike, saying that the U.S. could use nuclear weapons to “defend the vital interests of the United States” when facing “extreme circumstances.”

In the closing months of Obama’s presidency, some media outlets havespeculated that the Obama administration might revise its policy and issue a “no first use” pledge. But the New York Times reported in September that such a proclamation was unlikely, given strong opposition from Defense Secretary Ash Carter and Secretary of State John Kerry.

Opponents of a “no first use” policy argue that nuclear weapons not only deter other nuclear strikes but are required to deter non-nuclear aggression by Russia or China.

But supporters argue that the U.S. military is strong enough to deter those threats without the threat of a mushroom cloud. The U.S. spends more money on its military than its next six rivals combined, it has more military aircraft than Russia and China combined, and more aircraft carriers and military bases than the rest of the world put together.

Nuclear weapons are much less credible in deterring conventional, biological, or chemical weapon attacks. A more effective way of deterring and defending against such non-nuclear attacks … would be to rely on a robust array of conventional strike capabilities and strong declaratory policies.

Obama entered office intending to scale back the U.S. nuclear arsenal, vowing in a 2009 address to seek “the peace and security of a world without nuclear weapons.” He got off to a strong start, negotiating a treaty with Russia that set new limits on the number of deployed warheads each country had. This year Obama also became the first U.S. president to visit Hiroshima, where he called for a “moral awakening.”

But his legacy is being called into question by arms control groups, who have criticized his trillion-dollar plan to modernize the U.S. nuclear arsenal. The plan — which involves buying a whole new generation of land-based missiles, nuclear submarines, bombers, and cruise missiles over the next decade — would be a massive handout for defense contractors.

When asked about the modernization plan at a campaign rally in January, Hillary Clinton responded “Yeah, I’ve heard about that. I’m going to look into that. It doesn’t make sense to me.”

In May, the Pentagon published updated numbers showing that Obama had reduced the nuclear stockpile less than any other post-Cold War president.