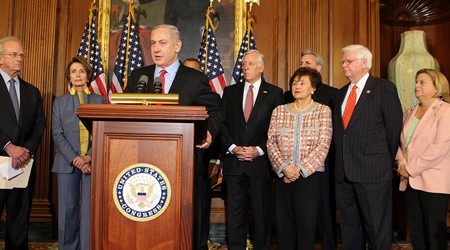 Israeli Prime Minister, Benjamin Netanyahu’s acceptance of an invitation to speak to the US Congress on 3 March, two weeks before the Israeli election and without any consultation with the White House, is aimed at advancing both Netanyahu’s re-election and the proposed new set of sanctions against Iran in the US Congress. For many months, pro-Israeli legislators and lobbyists have been threatening to re-impose existing sanctions on Iran and add new ones while negotiations are still going on.

Regardless of the argument that the sanctions legislation is meant to strengthen the US negotiating hand, the real purpose of the proponents of sanctions has always been to ensure that no nuclear agreement can be reached. Those proponents take their cues from Netanyahu, and that has been Netanyahu’s openly proclaimed aim ever since the negotiations with the Rouhani government began. Netanyahu has often insisted that Israel will not accept an agreement that allows Iran to retain any enrichment capability.

The Obama administration has made it clear that it would veto such new sanctions legislation, arguing that it would leave the United States with no options except the threat of war. That argument prevailed in the Senate earlier, and the administration may well be able to use it again to defeat the Israeli effort to sabotage the negotiations through sanctions legislation. But there are more battles to come.

The current tensions over the Netanyahu speech is just the latest chapter in a long-running drama involving an Israeli strategy to use its political power in the US Congress to tilt US Iran policy in the direction Israel desires. But in the past, that Israeli advantage has been combined with a strategy of trying to get the United States to take care of Iran’s nuclear problem by suggesting that, otherwise Israel might have to use force itself.

Netanyahu’s predecessor, Prime Minister, Ehud Olmert, initiated that strategy in May-June 2008, when the Israeli Air Force carried out a two-week air war exercise over the eastern Mediterranean and Greece. During that exercise, Deputy Prime Minister Shaul Mofaz threatened that if Iran continued what he called “its programme for developing nuclear weapons”, Israel “would attack”.

In fact, the purported rehearsal for attack and explicit war threats were a ruse. The Israeli Air Force did not have the ability to carry out such an attack, because it had only a fraction of the refuelling capacity it would have needed. The whole exercise was really aimed at influencing the next US administration. Israeli Defence Minister Ehud Barak, who conceived the strategy, sought to take advantage of the waning months of the George W Bush administration, which cooperated with the Israelis in pointing to the exercise as a signal to Iran that Israel’s most enthusiastic US ally would leave office in a few months. After Netanyahu was elected prime minister for a second time in early 2009, he kept Barak as his defence minister in order to refine the strategy of bluff to have maximum effect on the Obama administration.

Netanyahu introduced a new element into the ruse, playing the part of the zealot who viewed himself as the saviour of the Jewish people who would use force to prevent Iran from continuing its nuclear programme. He used two articles by Jeffrey Goldberg of Atlantic magazine featuring interviews with Netanyahu or his aides and allies to sway the American political elite to believe his bluff.

In contrast to his calculated self-created image as a messiah ready to recklessly go to war, Netanyahu’s reputation in Israeli political circles was one of a risk-averse politician. The editor of Haaretz, Aluf Benn, told me in a March 2012 interview that Netanyahu was generally known as a “hesitant politician who would not dare to attack without American permission.”

The climax of Netanyahu’s phony war threat was his carefully calculated showdown with Obama during the 2012 presidential campaign. It began with AIPAC manoeuvring a 401-11 vote in the House of Representatives demanding that Iran be prevented from having “nuclear weapons capability.”  Then, in August – two weeks before the Republican convention – after leaking to the press that he had all but made the decision to attack Iran in the fall, Netanyahu offered Obama what was termed a “compromise”: if he publicly accepted Netanyahu’s “red line” that Iran would not be allowed to have the enrichment capability for a bomb, Netanyahu would consider it a “virtual commitment” by Obama to “act militarily if needed” and “reconsider” his decision to attack Iran.

Netanyahu believed Obama would be forced to go along with the offer by the threat from a militantly pro-Israel Romney campaign, fuelled by tens of millions of dollars from Sheldon Adelson, Netanyahu’s main financial backer for many years. But instead, Obama got tough with Netanyahu. The Chairman of the Joint Chiefs of Staff General Martin Dempsey declared that he – meaning the US military – would not be “complicit” in any Israeli attack. Several days later, in a long phone conversation with Netanyahu, Obama flatly rejected his demand for a time limit on how long the US would wait for Iran to comply with its negotiating demands. And he refused to meet with the prime minister during a trip to the United States later that month.

After that defeat, the air went out of Netanyahu’s war threat strategy. But he still has his minions in Congress, and they have had a palpable impact on Obama’s negotiating position in the nuclear talks. The demand for a much smaller number of Iranian centrifuges than required to guarantee against an Iranian dash for a bomb was adopted primarily in order to stave off a concerted attack from the Congressional followers of Israel. And the administration’s posture on lifting sanctions is hamstrung by existing laws that were passed on the demand of Israel and by the fear of the ferocious attack from the same Congressional camp followers to any effort to get around those restrictions.

The power of the Israeli lobby is certainly part of the administration’s calculation in insisting that Iran must comply with US demands on the enrichment capacity and give up its aspiration for the removal of all US unilateral sanctions as well as UN Security Council sanctions.

Netanyahu’s approaching speech to Congress is a reflection of the increasingly open interference in US politics by Israel and its political forces in the United States. In the most recent manifestation of the subservient character of a large proportion of the US Congress in relation to Israel, Senator Lindsey Graham (R.-S.C.) told Netanyahu, “The Congress will follow your lead” on Iran and would demand a role in the final settlement. The phenomenon is a direct result of the large campaign contributions that go into the coffers of those in Congress who “follow the lead” of Israel and to the opponents of those who fail to do so. Such is the power wielded by AIPAC that very few dare to stand up to its threats.

There are limits to what an otherwise obsequious Congress will do for Netanyahu and Israel. Many members will not vote for a measure that can be credibly presented as an incitement to US war. Nevertheless, we are still likely to see a revealing contrast next week as Netanyahu is lionised (again) by the US Congress even as he is under fire in his own election campaign for his clumsy and possibly costly insult to the Obama administration.

– Gareth Porter is an independent investigative journalist and historian writing on US national security policy.  His latest book, “Manufactured Crisis: The Untold Story of the Iran Nuclear Scare,” was published in February 2014.