This was a speech threatening war.

Realizing he has insufficient clout to stop the negotiations, Netanyahu demanded a back-up position: If not “no” deal, then we can have a better deal.

His vision of a “better” deal, however, is grounded in Iranian surrender. And since that is not going to happen, demanding it means abandoning diplomacy in favor of—yes, war. 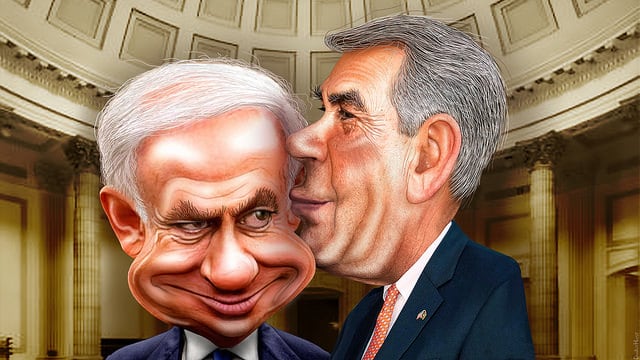 Netanyahu threatened just such a war against Iran, in his statement “even if Israel stands alone, the Jewish people will not remain passive.”

The threat to nuclear non-proliferation in the Middle East was issued long ago—not by Iran, but by Israel’s own internationally known but carefully denied nuclear arsenal. It is Israel, not Iran, whose hundreds of nuclear weapons threaten a potential nuclear arms race in the region, threaten its neighbors, and threaten the world.

Any other nuclear weapon in the region, whether from Iran or any other country in some distant future, would not threaten Israel’s existence, it would threaten only Israel’s nuclear weapons monopoly.

And by ignoring any reference to Israel’s decades of occupation of Palestinian land and dispossession of Palestinian people, by keeping the U.S. focus on false claims of Israel being endangered, Netanyahu kept the focus of Congress and the U.S. media squarely where he wanted it—on Iran, away from Palestine, settlements, assaults on Gaza, violations of international law.

Phyllis Bennis directs the New Internationalism Project at the Institute for Policy Studies.  Her books include Understanding the Palestinian-Israeli Conflict: A Primer, Understanding the U.S.-Iran Crisis: A Primer, Ending the Iraq War: A Primer, and most recently Ending the Us War in Afghanistan: A Primer. If you want to receive her talking points and articles on a regular basis, click here and choose “New Internationalism.” You can find her on Facebook here:http://www.facebook.com/PhyllisBennis