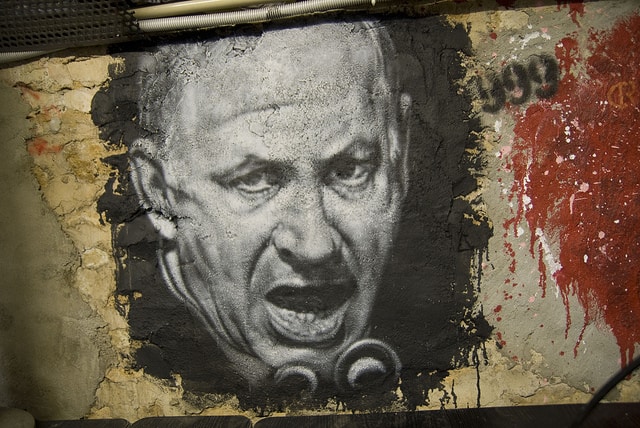 Israel Prime Minister Benjamin Netanyahu not only refuses to recognize the Palestinian’s new unity government, he has appealed to the international community not to recognize it. (Photo: Flickr / cc / Abode of Chaos)

The formation of a new unity government between Fatah and Hamas, although strongly resisted by the Israeli government leadership, may offer some hope for eventually leading to renewed peace talks between the Palestinian Authority and Israel’s government. For Mr. Netanyahu to resist this union is a futile exercise that may contribute to Israel’s international isolation.

Netanyahu couldn’t hide his displeasure at the agreement between Fatah and Hamas. “Today, Abu Mazen [as Palestinian President Mahmoud Abbas is called] said yes to terrorism and no to peace,” said Netanyahu. Israel’s Economy Minister Naftali Bennett was even more aggressive saying, “The government of terrorists in suits established by Fatah and Hamas, the very same organization that in its charter has horrific sentences such as calling for ‘killing the Jews who are hiding behind trees and stones,’ is an illegitimate government.”

Although this statement is certainly indefensible, so are similar statements made by leading Israeli officials regarding the Palestinians. They are no reason, in themselves, to refuse to recognize the new Palestinian government or to maintain contact with it. Urging Israel‘to go from defense to offense’ Bennett urged the annexation of settlement blocs in the West Bank.

The actions proposed by Bennett have been strongly condemned by important Israeli figures. “In the meantime, the number of settlements in the West Bankgrew threefold and fourfold, and the brutality of the occupation increased to the point where soldiers now shoot demonstrators out of nothing but boredom,” wrote Gideon Levy, a leading Israeli journalist.

Abbas said that the 17-member cabinet would comprise essentially technical officials who would strive to pursue peace, despite Hamas’s refusal to accept coexistence with Israel. He also acknowledged that previous division between the movements had derailed the Palestinians’ aims.

Netanyahu not only refused to recognize the new government but appealed to the international community not to recognize it. At the same time, the Israeli government refused travel permissions to three Gaza-based ministers to travel to the West Bankfor the swearing-in ceremony.

There are still serious disagreements between the two Palestinian movements, such as how to join rival security forces in Gazaand the West Bank. However, President Abbas before presiding over the Cabinet’s first meeting stated, “This black page in our history has been turned forever and will never come back.”

Abbas has already made some important concessions to the Israeli government: it has pledged that the new administration will abide by the principles laid down by the Middle East Peace Quartet, it will recognize Israel’s right to exist and it will reject violence and abide by existing agreements. These conditions had been repeatedly rejected by Hamas in the past.

These pledges are not enough for Netanyahu, who has continued the illegal and widely condemned blockade of Gaza, which has resulted in shortages of food and basic medicines that have hurt children’s lives. With his characteristic double standard, Netanyahu said, “Enough of these tricks. If this new Palestinian government has regained sovereignty over Gaza, the first thing that Abbas should do is announce he is starting demilitarizing Gaza.”

César Chelala, MD, PhD, is a co-winner of an Overseas Press Club of America award. He is also the foreign correspondent for Middle East Times International (Australia).