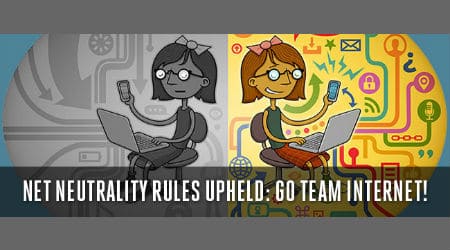 “For the reasons set forth is this opinion, we deny the petitions for review.”  Those were the sweetest words I’ve heard in a long while, as the US Court of Appeals for the District of Columbia Circuit turned down the ridiculous efforts of the big telecom companies to derail the Federal Communications Commission’s open-internet — or “net-neutrality” — rules.

The decision capped years of struggle between open-internet advocates and the cable and telecom conglomerates. Without strong net-neutrality rules, broadband providers could exercise intolerable levels of gatekeeper control over what users can do, see and say online. The FCC rules just affirmed by the court prevent them from playing favorites by slowing down or even blocking particular websites and applications.

This victory is a testament to the indefatigable work of millions of advocates across the nation who set out to correct a heinous mistake the FCC made 14 years ago. Back in 2002, under the guiding hand of then-Chairman Michael Powell, the commission began surrendering its power to protect consumers. It declared cable broadband an “information service” rather than the more accurate “telecommunications service” that would have permitted closer oversight.

It was the heyday of the Bush-Cheney administration’s rage to deregulate, and the industry lobbyists and the members of Congress sponsored by them applauded the muzzling of the commission’s watchdog duties.  At issue: Is the broadband internet the sole province and plaything of a few giant providers, to be exploited for profits alone, or do we the people get a say in how our communications ecosystem can advance the common good?

I was a commissioner at the time and dissented as strenuously as I could. I warned that the decision would hurt consumers, cripple regulators and undermine the public interest. The internet, I argued, is the greatest engine for economic opportunity and “small-d” democracy since moveable type. We should never have engaged in linguistic jumping jacks to find new ways for broadband providers to over-charge and under-deliver.

I took this message on the road — to public forums and town meetings across America.  Citizens of all stripes were inspiring in their responses. They knew the stakes and took up the fight, calling and marching and emailing and demonstrating for enduring open-internet protections throughout the Bush years and into the Obama administration. They called for a relatively easy solution: for the FCC to reverse the Powell commission’s disastrous deregulation with legally sustainable open-internet rules. Yet time and Republicans — and many Democrats — made excuses for their spineless deference to, and their financial dependence on, Big Cable and Telecom.

Twice the courts rejected weak-tea rules proposed by an FCC that lacked the courage to do its duty on the public’s behalf. In 2014 the agency appeared, once again, ready to roll over. Its latest inchoate proposal would have allowed corporate internet service providers (ISPs) to create fast lanes for the privileged few. These paid-prioritization schemes for the wealthy 1 percent would have pushed nonprofit, independent, diverse and niche voices to the slow lane, choking off and marginalizing the public’s participation in the developing discourse of democracy.

I was thrilled when once again the people spoke up. They rallied from the teeming boroughs of New York City to tiny Baraboo, Wisconsin. They deluged Congress and the FCC with calls and emails that more than once crashed the FCC’s website. Again, the public spoke clearly:  Do not compromise online free speech; correct the Powell-era mistake; and properly reclassify broadband.

Having dedicated much of my career to creating a communications landscape that empowers citizens to make change, I was of course enormously gratified to see everyday Americans stand up to the corporate lobbies. I was even more pleased when the FCC finally heard the people’s demands. In February 2015 the commission righted the wrong and reclassified broadband as a communications service.

Obviously Big Cable and Big Telecom were having none of it. They immediately turned their lobbyists loose on Capitol Hill to use every means in their playbook to punish the FCC. They floated budget cuts and appropriations riders to nullify the new rules, and they litigated to overturn them.

The court knew better. The facts and law were always on the public’s side, and now the court has upheld every word of the FCC’s new soundly based rules.  The ruling affirms, for all to see, that the FCC does indeed have the legal authority it needs to protect the people’s interest in an open internet.

The industry is pushing back — hard. Though the decision should have put to rest every remaining question, AT&T has already signaled it will appeal all the way to the Supreme Court. And just as the good news on the open internet was breaking, House Speaker Paul Ryan listed ending net neutrality as one of his priorities. With Ryan’s blessing, appropriations riders that would hamstring the FCC’s ability to protect consumers and promote the public interest have already passed the House. It’s up to the Senate to block them, and that will prove a tough fight.

You would think the  providers and policymakers would accept reality by now — that instead of spending so many millions of dollars and so much time lobbying, they would begin deploying and maintaining fast, affordable and competitive broadband across the nation.  Just think of how many scores of cities could have been lighted by now.

So it’s grass-roots time again. We need another uprising of public-interest warriors who will call, demand and rally as they have done twice before. We need to dust off our marching shoes to defend the open internet from the cable and telecom titans. We’ve won an important legal battle, but the fight against entrenched special interests demands constant vigilance. But now we know we can win if we commit to fight and fulfill our obligations as citizens of a self-governing nation.

Onward to the battles ahead!

Michael Copps is a former commissioner and acting chairman of the Federal Communications Commission, where he served from 2001–11. He serves on the board of Free Press and the Free Press Action Fund and is a special adviser to Common Cause. Follow him on Twitter: @coppsm.