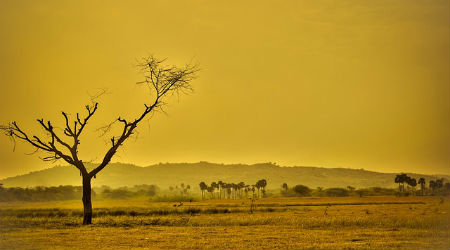 NASA this weekend released new data which shows that February 2016 was not only the hottest in recorded history, but it soared past all previous records, prompting scientists to describe the announcement as “an ominous milestone in our march toward an ever-warmer planet.”

The average global surface temperature for February was 1.35°C warmer than the global average for the month between 1951-1980—a margin that shattered the previous record of 1.14°C, which was set just one month earlier—and exceeded preliminary figures released earlier this month.

“NASA dropped a bombshell of a climate report,” wrote meteorologists Bob Henson and Dr. Jeff Masters, founder of the Weather Underground. “February 2016 has soared past all rivals as the warmest seasonally adjusted month in more than a century of global recordkeeping.”

February’s new temperature record beat that set in January 2016 by a full 0.21°C, which Masters and Henson described as “an extraordinary margin.”

Scientists are normally wary of highlighting a single month’s temperature spike, particularly in an El Niño cycle. However, this record bests even the one set during the “super” El Niño of February 1998 by 0.47°C.

Stefan Rahmstorf, from Germany’s Potsdam Institute of Climate Impact Research and a visiting professorial fellow at the University of New South Wales, told the Sydney Morning Herald that the new figures are “quite stunning … it’s completely unprecedented.”

And given the increasing concentration of carbon in the global atmosphere, which isdriving higher long-term temperature increases as well as other extreme weather events, the string of monthly records is a foreboding sign.

The real significance of the February record is in its departure from the seasonal norms that people, plants, animals, and the Earth system are accustomed to dealing with at a given time of year. Drawing from NASA’s graph of long-term temperature trends, if we add 0.2°C as a conservative estimate of the amount of human-produced warming that occurred between the late 1800s and 1951-1980, then the February result winds up at 1.55°C above average. If we use 0.4°C as a higher-end estimate, then February sits at 1.75°C above average. Either way, this result is a true shocker, and yet another reminder of the incessant long-term rise in global temperature resulting from human-produced greenhouse gases.

They conclude, “we are now hurtling at a frightening pace toward the globally agreed maximum of 2.0°C warming over pre-industrial levels.”

And Rahmstorf also notes, “We are in a kind of climate emergency now.”