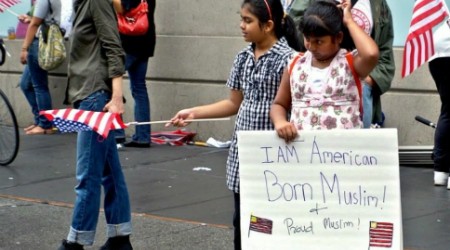 by Murtaza Hussain
The Intercept

Over the course of Donald Trump’s electoral campaign, the now president-elect repeatedly promised to turn Muslim Americans’ darkest fears into reality. Trump has suggested that under his administration, Muslims may be listed and recorded in a national database, forced to carry special identification cards, and subjected to intensified surveillance in their places of worship. Trump has also suggested that many Muslims could be banned from the United States wholesale, as part of a broader crackdown on immigration.

Trump’s proposals, however vile, at one time seemed almost too outlandish to be accepted by the American electorate. But now, the inconceivable has happened. Donald Trump, the former reality-TV host and real estate mogul, has gone from dark-horse GOP primary candidate to the president-elect of the United States. With Republicans retaining control of Congress, the future President Trump has a mandate to turn many of his proposals into reality.

While many communities have good reason to fear a Trump presidency, for Muslim Americans the fears are particularly immediate. Not only is Trump openly hostile to them, roughly half of American voters have either accepted his message of hatred and xenophobia, or otherwise helped abet it. During the primaries, strong majorities in many states expressed direct support for Trump’s proposal to ban Muslims from the country.

The revelation that there is such widespread, demonstrable popular support in the United States for drumming Muslims out of society has been chilling for many.

“I grew up in New England, in a community that was worldly, educated, and prosperous — but the last time I was there, I saw more Trump signs than I could believe. That wasn’t about economics. It was about tribe, race, and privilege,” says Haroon Moghul, a Muslim activist and fellow at the Institute for Social Policy and Understanding. “I’m afraid for my family and for Muslim Americans generally. To use a cultural reference we can all understand: We feel like we just got voted off the island. Now all we’re doing is waiting for when, and how, they’ll show us out.”

“Will it happen gradually, or all at once? Will it be late at night when no one is watching, or in the middle of the day, to chants of ‘USA, USA’?”

Faiza Ali, a community organizer in Brooklyn, says she was “shocked and terrified” by the results of the election. Like many others, she fears that Trump’s anti-Muslim political platform will lead to the mainstreaming of Islamophobia within American society. “An unabashed bigot who has called for the banning of Muslims and the shutting down of mosques was elected president. When he was running his campaign, there was no place for Muslims in Trump’s America. What does this mean for us now?”

Since Trump’s election, a number of hate crimes targeting visibly Muslim women have been investigated across the country. Many fear that such incidents are only a harbinger of future discrimination, now legitimized by the bigotry of the president-elect himself.

“I fear for communities of color and Muslims, especially women who wear hijab,” Ali says. “Trump ran a campaign based on fear and hate, and without a doubt, fear and hate is exactly what won on Tuesday.”

While the shock of Trump’s election is still reverberating, some Muslim American activists say that Trump’s presidency may offer a small silver lining: the opportunity to forge alliances with other communities to defend civil liberties in the United States. After 15 years of being at the forefront of surveillance and harassment by the FBI, NSA, and other federal government agencies, Muslim Americans are hopeful that the widespread shock over Trump’s election will offer an opportunity to build new alliances with other civil society groups, while turning more Americans against Islamophobia.

“Americans have to understand that when Muslims were depicted as a national security threat to legislate against, with measures like the Patriot Act and NDAA being passed as a result, everyone lost their civil liberties, not just us,” says Maytha Alhassen, a PhD researcher in American studies and ethnicity at the University of Southern California. “By painting us as an unrelatable community, disconnected from American values, the government made it easy for Americans to vote against their own interests.”

Back in the early post-9/11 period, the Bush administration expanded government powers, including domestic surveillance and watchlisting. The Obama administration has continued and entrenched these measures, which have been accepted by many on the basis of national security. In general, the targets of the most draconian security policies have been Muslims. An NYPD surveillance program that conducted blanket surveillance on Muslim neighborhoods in New York and New Jersey and a national program that permitted the surveillance of Muslim American civil society leaders are among the many examples.

The fact that such programs were revealed largely during a relatively popular Democratic administration blunted much popular criticism. But under a GOP president as divisive, threatening, and bellicose as Trump, there may be an opportunity for a coordinated push against such policies.

“We had a lot of work to do no matter who won the presidency. Many policies were already in place that were targeting our community, but now the landscape has fundamentally changed,” says Mohammad Khan, campaign manager at MPower Change, a Muslim grassroots advocacy organization.

Khan says that his organization is bracing for the worst after Trump’s election. He describes the atmosphere of fear among Muslim Americans today as similar to the aftermath of the attacks on September 11, 2001.

“I think we’re going to have to operate in a manner similar to opposition parties living under authoritarian regimes. We expect organizations and leaders to be targeted for harassment and legal measures in the coming years, as well as wider crackdowns on public assembly and dissent,” Khan says. “A crackdown is coming to civil society in general, and on Muslims in particular, whether they engage in activism or not.”

The sweep of this crackdown may help Muslim Americans gain more public support on issues affecting their community. “In a crisis moment like this, other communities may realize how Islamophobia has been used as a justification to expand the coercive power of the government,” Khan says. “That can bring a sense of unity between different groups who share a fear of being targeted by this administration.”

Over the course of a long, divisive campaign, Trump has succeeded in alienating vast swaths of American society. His attacks against the press and the judiciary have strongly suggested that his administration will seek to govern in a bullying, authoritarian fashion. With the vastly expanded executive powers bequeathed to him by the Obama administration, Trump stands ready to inherit a presidential office of unprecedented historical power.

“For years we have been warning of the sheer magnitude of a government that has militarized the police, dramatically expanded secrecy, and normalized suspicionless surveillance,” says Naureen Shah, director of national security and human rights at Amnesty International. “We’re now seeing growing consciousness of how we’re all affected by these aggressive and abusive security measures.”