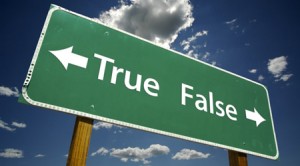 We also all know that the reality falls far short of the ideal. Voters are often misinformed, and politicians aren’t reliably truthful. Still, we like to imagine that voters generally get it right in the end, and that politicians are eventually held accountable for what they do.

But is even this modified, more realistic vision of democracy in action still relevant? Or has our political system been so degraded by misinformation and disinformation that it can no longer function?

Well, consider the case of the budget deficit — an issue that dominated Washington discussion for almost three years, although it has recently receded.

You probably won’t be surprised to hear that voters are poorly informed about the deficit. But you may be surprised by just how misinformed.

In a well-known paper with the discouraging title, “It Feels Like We’re Thinking,” the political scientists Christopher Achen and Larry Bartels reported on a 1996 survey that asked voters whether the budget deficit had increased or decreased under President Clinton. In fact, the deficit was down sharply, but a plurality of voters — and a majority of Republicans — believed that it had gone up.

I wondered on my blog what a similar survey would show today, with the deficit falling even faster than it did in the 1990s. Ask and ye shall receive: Hal Varian, the chief economist of Google, offered to run a Google Consumer Survey — a service the company normally sells to market researchers — on the question. So we asked whether the deficit has gone up or down since January 2010. And the results were even worse than in 1996: A majority of those who replied said the deficit has gone up, with more than 40 percent saying that it has gone up a lot. Only 12 percent answered correctly that it has gone down a lot.

Am I saying that voters are stupid? Not at all. People have lives, jobs, children to raise. They’re not going to sit down with Congressional Budget Office reports. Instead, they rely on what they hear from authority figures. The problem is that much of what they hear is misleading if not outright false.

The outright falsehoods, you won’t be surprised to learn, tend to be politically motivated. In those 1996 data, Republicans were much more likely than Democrats to hold false views about the deficit, and the same must surely be true today. After all, Republicans made a lot of political hay over a supposedly runaway deficit early in the Obama administration, and they have maintained the same rhetoric even as the deficit has plunged. Thus Eric Cantor, the third-ranking Republican in the House, declared on Fox News that we have a “growing deficit,” whileSenator Rand Paul told Bloomberg Businessweek that we’re running “a trillion-dollar deficit every year.”

Do people like Mr. Cantor or Mr. Paul know that what they’re saying isn’t true? Do they care? Probably not. In Stephen Colbert’s famous formulation, claims about runaway deficits may not be true, but they have truthiness, and that’s all that matters.

Still, aren’t there umpires for this sort of thing — trusted, nonpartisan authorities who can and will call out purveyors of falsehood? Once upon a time, I think, there were. But these days the partisan divide runs very deep, and even those who try to play umpire seem afraid to call out falsehood. Incredibly, the fact-checking site PolitiFact rated Mr. Cantor’s flatly false statementas “half true.”

Now, Washington still does have some “wise men,” people who are treated with special deference by the news media. But when it comes to the issue of the deficit, the supposed wise men turn out to be part of the problem. People like Alan Simpson and Erskine Bowles, the co-chairmen of President Obama’s deficit commission, did a lot to feed public anxiety about the deficit when it was high. Their report was ominously titled “The Moment of Truth.” So have they changed their tune as the deficit has come down? No — so it’s no surprise that the narrative of runaway deficits remains even though the budget reality has completely changed.

Put it all together, and it’s a discouraging picture. We have an ill-informed or misinformed electorate, politicians who gleefully add to the misinformation and watchdogs who are afraid to bark. And to the extent that there are widely respected, not-too-partisan players, they seem to be fostering, not fixing, the public’s false impressions.

So what should we be doing? Keep pounding away at the truth, I guess, and hope it breaks through. But it’s hard not to wonder how this system is supposed to work.