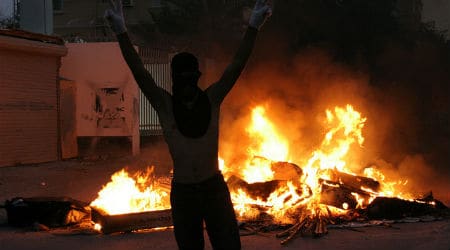 U.S. President Barack Obama’s recent comments at the National Prayer Breakfast that compared savage deeds by the Islamic State in Iraq and the Levant (ISIL) in the Middle East to Christian-anchored brutality such as the Crusades, the Inquisition and Jim Crow laws have sparked major controversy in the United States. Commentators have debated whether and to what extent the president’s comparison was justified.

But this American debate has missed more important point: By using religion to frame this juxtaposition of all these cases of vulgar brutality, Obama, following Islamophobic leaders he would criticize, once again sadly misguides Americans by making religion the key that explains some people’s criminal conduct.

This claim may have applied to some historical cases around the world. But in today’s Arab world, the primary driver of public protests and violence is not religion but citizens’ desperate reactions to the policies of governments — both their autocratic Arab governments and aggressive foreign governments. In other words, the problem is policy, not piety. And the policy problems that create chaos emanate from both the Arab countries and foreign lands.

Like so many other Western leaders, Obama is unable to acknowledge the underlying political causes of the turbulence across the Middle East and finds it easier to blame these on violent religious ideologies. Comparing ISIL and other Middle Eastern extremists to the Crusaders and Jim Crow supporters who killed for Christ is an easy analogy. It is also wrong and diversionary, because it conceals the share of responsibility that the United States and its allies bear for the region’s chaos.

There are three actors whose policies in the modern Middle East have brought the region to its wrecked condition today. The first and oldest is the centuries-old tradition of Western powers that have repeatedly invaded militarily and tried to shape it for the sake of their own interests, leaving savage and violent lands like Iraq and Afghanistan in their wake. The second and most important is the chronically autocratic, incompetent, violent and corrupt form of Arab governance that has denied citizens a role in shaping their societies or holding leaders accountable. Hundreds of millions of Arabs remain politically incapacitated before their security-based, mostly family-run governments that remain in power for decades at a time, thanks heavily to support by foreign powers. The third reason is the waste, destruction and mass political humiliation that defines many Arab countries because of their losing encounters with an Israeli state that is unconditionally supported in its actions by the U.S. The crowning example of this was the 100-0 vote in the U.S. Senate to support Israel during the war in Gaza last summer.

The combination of these three ailments that have disfigured much of the Arab world in modern history has led to hundreds of millions of disgruntled, vulnerable and fearful young Arab men and women who lack both the political means to change their societies for the better and the socioeconomic opportunities to achieve their full human potential. The impoverishment and political marginalization of the majority of Arabs outside the Gulf oil producers have driven small groups of desperate youths into increasingly radical movements that speak in religious tongues and seek to transform the existing order by any means necessary. The overwhelming majority of the 370 million Arabs shun violent extremists such as Al-Qaeda and ISIL. Yet as socioeconomic stress increases and political rights disappear for the vast majority of these Arabs, the tiny pockets of violent religious extremism slowly grow. And with every Israeli or U.S. military action in the region and the entrenchment of Arab dictators, these pockets expand even faster. Obama cannot escape the reality that the fastest expansion of these Qaeda-vintage violent religious extremists in modern history has occurred in the past 25 years, when the Arab world suffered the most extreme forms of U.S.-supported police states, U.S.-led warfare and U.S.-supported Israeli colonization and militarism.

Were Obama ever to analyze this pattern honestly to try to understand the underlying drivers of Arab state chaos and reactionary religious extremism, he would uncomfortably find strong American involvement in each of these three areas. The president, therefore, faced a dilemma: either own up to U.S. responsibility for a significant share of the region’s problems or lean on the deceptive tale of religious extremism. He chose the latter. After all, it is much easier to explain deviant behavior by Arab Muslims as new episodes of religious extremism that make them peculiarly unable to absorb the promises of democracy and prosperity that the U.S., in all its glorious exceptionalism, claims to offer.

Rami G. Khouri, a Jordanian-Palestinian national, is a senior public policy fellow at the Issam Fares Institute for Public Policy and International Affairs at the American University of Beirut and a senior fellow of the Harvard Kennedy School.