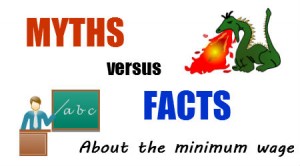 MYTH  Raising the minimum wage will cause people to lose their jobs.

FACT  A review of 64 studies on minimum wage increases found no discernible effect on employment. [US Dept. of Labor] After San Jose raised its minimum wage, “the pace of employment gains in the San Jose area beat the improvement in the entire state of California.” [Wall Street Journal, 4/9/14]

MYTH  Raising the minimum wage will only benefit teenagers and part-time workers.

FACT  The average age of minimum wage workers is 35. Most of them – 54% – work full time and 32% work 20-34 hours per week. More than a quarter of all minimum wage earners are parents. Overall, 19% of all US children live in a household that would benefit from an increase in the minimum wage. [NY Times, 6/10/14] In addition, the entire local economy benefits from increased consumer spending. Every $1 increase in the minimum wage results in an additional $2800 in consumer spending per year per affected household. [Chicago Federal Reserve, Feb. 2011]

MYTH  Raising the minimum wage will mean a sharp increase in prices.

FACT  Economic studies have shown a very small increase in prices can be expected when the minimum wage is increased. A 10% increase in the wage, the studies show, results in a 0.7% increase in prices. As an example, a McDonald’s Big Mac combo meal (average price in California $7) would go up by less than a nickel. Many employers, however, simply absorb the cost with slightly lower profits. [Washington Post, 10/1/14]

Support an increase in the minimum wage in your city. Sign the petition at
www.peaceandjustice.org/wage-petition

Can McDonald’s Make a Profit While Paying $15 An Hour? (Think Progress)