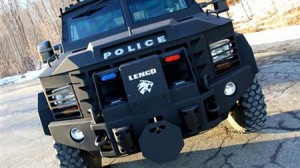 This dangerous conversion from honest police work to a martial force is not just a matter of acquiring arms, but of our police departments acquiring a military attitude.

Attention citizens: I have received inside information revealing that global terrorists are targeting us again. Their target is not Washington, New York City or even Disneyland. Rather, it is: Concord.

You know, in New Hampshire. The state capital. Even though only about 43,000 people live there, Concord apparently has some sort of secret significance that makes it a target. We can infer this from an extraordinary defensive action being taken by local authorities. Concord police, fully backed by the city council, are preparing for a horrific terroristical assault. Specifically, they sought a $258,000 grant from the Department of Homeland Security so they can gird themselves for the onslaught by purchasing a “Lenco BearCat G3” armored vehicle. Sure enough, DHS gladly coughed up the cash.

This bold stand to defend the homeland was revealed by the New Hampshire Civil Liberties Union, which obtained a copy of the grant request. Actually, it is not al-Qaida terrorists that have Concord’s police gearing up for war, but, as their request put it, “the domestic type” of terrorists.

Really? Terrorists in Concord? Yes, claim police, referring vaguely to “daily challenges” and warning that the “threat is real and here.”

Who are these domestic demons? The police finger two groups. First, Occupy NH. But it’s a benign bunch that legitimately protests inequalities in our country, and its only “violence” has been directed at litter, having joined in local litter pickup days. Second, the Free State Project. But it’s just a libertarianish outfit trying to convince 20,000 likeminded people to move to New Hampshire and support limited government. How’s that for irony?

Neither group is armed or dangerous, and both are committed to nonviolence. Still, the police insist they need a BearCat G3 because of terrorist threats that might involve “chemical, biological and radiological materials, as well as explosive gases.”

However, the most explosive gas in Concord is spewing directly from the out-of-control police officials who assail their own peaceful citizens as “terrorists.” And the real threat to our security is DHS, which keeps shoveling our tax dollars into the militarization of America’s police forces.

In fact, the real motive behind Concord’s desire for this war toy seems to have been BearCat envy — it turns out that the nearby towns of Keene and Manchester already had BearCats, so Concord cops wanted to keep up with the Joneses in the ever-escalating police arms race.

But this ridiculous and dangerous conversion from honest police work to a martial force in our own land is not just a matter of acquiring arms, but of our police departments acquiring a military attitude. An example of this alarming shift can be found in, of all places, the Garden of Eden.

The Biblical Garden, we’re told, was heaven on Earth … until Adam ate that apple. Then all hell broke loose. Well, hell recently erupted in the garden again — this time in Arlington, Texas, on a small organic farm named “Garden of Eden.” At about 7:30 on the morning of Aug. 2, a SWAT team of armed police agents, code enforcement officers and narcotics detectives suddenly exploded all over Shellie Smith’s little farm. They burst through the gate, handcuffed the terrified residents and held them at gunpoint while the agents executed the raid’s mission.

Which was what, exactly? A City of Arlington spokeswoman explained, “The purpose was to improve the quality of life (and) to resolve life safety issues within neighborhoods.” It seems there had been complaints about marijuana being grown on the farm and about the place being unkempt.

So, what did the derring-do raiders achieve? Widespread ridicule for their farcical bust. They captured 17 blackberry bushes, 15 okra plants, 14 tomatillo plants, some native grasses and all the sunflowers. Then they whacked down Shellie’s sweet potato patch with a Weed Eater, and seized the farm’s compost, along with some wooden pallets, old tires and furniture.

Notice what they did not find? Marijuana plants. Nor any other illegal products. In short, on the basis of rumor, autocratic police power was unleashed to “improve the quality of life” by destroying an organic farm.

Why would police resort to paramilitary force just to check out a few marijuana plants and some trash? Because right-wing officials and arms-industry lobbyists have been pushing hard to get police departments all across America to switch from a peacekeeping attitude to an aggressive, militarized SWAT mentality, with officers being armed, trained, and psyched to treat common citizens as enemies.

To learn more and help push back, go to aclu.org/militarization.