Posted on May 26, 2014 Posted By: TD Daniell Categories: Current News 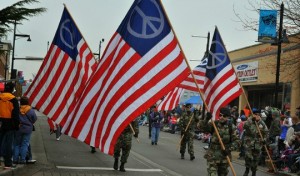 The Peace Flag Honor Guard marches down Main Street in Auburn, WA in 2013. (Photo by Cliff Wells / Veterans for Peace)

Memorial Day is difficult for me as it is for all veterans.  My annual seasonal despair is, of course, directly related to the lost lives commemorated here and to the unrelenting militarism of our country, the celebration of which is particularly pronounced on this day and the upcoming Fourth of July.  This year the despair seems deeper in my core, compounded by the recent trip I took to Palestine with Rob Shetterly and Lily Yeh. Despair?  There would appear to be real reason for despair embodied in the separation wall, in the settlements, in the building demolitions, in the checkpoints and in every other indignity heaped on Palestinians daily.

The celebrated author John Berger writes of this despair and he identifies why people of conscience, particularly in the U.S. might share Palestinians’ despair.  Referring to the continuing theft of Palestinian land he says, “It is not happening in some remote war-locked corner of the globe; every Foreign Office of every rich nation is watching and not one takes measures to discourage the illegalities.”  He quotes an aggrieved Palestinian mother, “The silence of the West is worse than their bullets.”  The 10-year, $30 billion military aid package granted Israel by the U.S. government in 2007 makes clear our complicity.

Throughout our visit, on being assaulted with the magnitude of the injustice imposed on the Palestinians, on the asymmetry of power, I could not but wonder why there were not suicide bombers on every corner, on every bus, and in every café.  In fact, Berger wrote in 2005, three years after the construction of the wall began, there had actually been a reduction in suicide bomber attacks.  Violence by Palestinians has continued to decline and suicide bombings have virtually stopped even in the face of the daily humiliations.  Palestinians have collectively managed to use despair to strengthen resilience.

Which brings me to that which I intended to address today—military suicides.

What else can it be but despair that drives U.S. military veterans to take their lives at the rate of 22 each day?  Twenty-two each day!  8,000 each year! What a shocking reality!

To a substantial degree I believe the explanation lies in a phenomenon given little to no consideration by the U.S. military or by U.S. foreign policy makers—moral injury.

I first heard reference made to moral injury by the renowned anti-war activist and Iraq war veteran, Camilo Mejia, who, on refusing to be re-deployed, was court-martialed and sentenced to a year in prison.  Mejia described his first recognition of moral injury, “Nothing ever prepares you for the unmeasured killing of civilians, nothing ever prepares you for what that does to you as a human being…to kill an innocent person.  I have a conscience, you know, which goes way beyond any law, it goes way beyond any order that I can receive.”

I believe that the agony suffered by Camilo Mejia and by many veterans is exacerbated when they find little or no consolation in wars that on honest examination seem to have no purpose beyond advancing elite interests.  A fundamental dissonance contributes to their anguish.   Acts these veterans would find in violation of their moral code are embraced, even celebrated, by the dominant cultural mythology of valorous service and the necessity, even goodness, of our wars.

This veteran has concluded we live within a deeply flawed culture addicted to war and inured to its madness.  Try as I have I can find no solace in so-called “just war theory” when I reflect on my war.    In “just war theory” all I find is rationalization for our past and flawed rationale to stay our default course.  As Mejia says, “Killing is killing.”  How do we get around the condemnation of killing as proscribed by every major religion on the planet?

In thinking of the Vietnam War I’m reminded that the Vietnamese have little incidence of what we commonly refer to as PTSD.  They theorize that the Vietnamese warrior’s cause was loftier than ours—after all, they were fighting for the very survival of their country, under siege by foreign invaders.  Isn’t it likely the American Vietnam War veteran has a much more difficult time rationalizing culpability for the loss of 2-3 million Vietnamese lives?  Might there not be an element of moral injury experienced by the American Vietnam War veteran that has everything to do with the high incidence of that generation’s suicide rate? (Note:  Dr. Ed Tick, noted psychotherapist and author of War and the Soul, reports that over 100,000 Vietnam vets have taken their lives.)

Why have I mentioned the contemporary picture in Palestine?  Other than that I have just returned and the enormity of the crime is vivid in my mind, it is because here can be found a model for our country and for our peace community.  In general, Palestinians are resolutely engaged in the struggle and their spirit is unflagging, but violent acts perpetrated by citizens are aberrations.  They are resistant, not resigned.  Where despair might be warranted steadfast perseverance is predominant.  Our own peace community must bring this same resolve to our struggle against militarism and the culture that glorifies military service.  Our work has to be ferocious and continue unabated.  Were we to knock-down the myth that the warrior’s sacrifices serve the ideals and the security of our country perhaps we would compel more Americans to question the very concept of war itself.

Dud Hendrick is a member of Veterans for Peace.  He has traveled widely to meet with and to speak about the victims of U.S. foreign policy.  He resides on Deer Isle, Maine and can be emailed at dudhe [at] myfairpoint.net