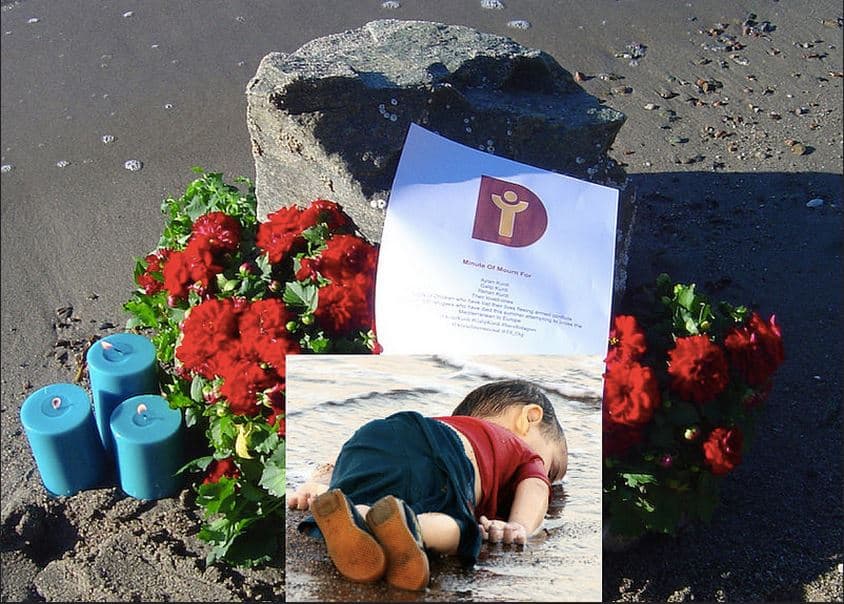 The photo of 3-year-old Alan Kurdi’s serene little body lying face down on a Turkish beach haunts me. When it first began making the rounds of social media, I refused to look. It was too painful and too much like what my own 2½-year-old son looks like when he falls asleep.

There is suffering among children all over the world whose faces and bodies we don’t see, and because we don’t see them, their suffering has no impact on us.

In Sierra Leone, an infant born to that country’s first Ebola survivor died recently. Victoria Yillia had already lost a horrifying 21 members of her family to Ebola, but her child died apparently of an unrelated infection in a world where we are supposed to have medically conquered the ravages of such childhood maladies.

The image of a 3-year-old Rohingya toddler named Shahira Bibi lying malnourished on a hospital bed earlier this year should have elicited outrage similar to that caused by Alan Kurdi’s photo. But it didn’t, and when she died in Indonesia, there was little media coverage of the plight of the persecuted Rohingya minority.

The images of dead Palestinian babies during last year’s war on Gaza should have stirred enough consciences to stop enabling Israeli brutality against a defenseless and besieged population. The Palestinian-American writer Yousef Munayyer tweeted cynically:

Yemen’s starving and skeletal infants should be a stain on the global conscience as the U.S.-backed Saudi war blocks food aid to an already impoverished nation. Half of all Yemenis are at risk of starvation, and children are naturally the most vulnerable among them. Photos of Yemeni babies show ribs sticking out, limp hair and large, empty eyes.

In the United States, the images of preschool-age children from Central America and Mexico being locked up in privately run “family detention centers” that are nothing less than prisons should be considered outrageous. The only “crime” that these children and their mothers have committed is escaping the horrors of the drug war and the policies of ruthless U.S.-backed leaders in nations like Mexico and Honduras.

Why then did Alan Kurdi’s death move the world so deeply when other children’s lives and deaths do not seem to matter as much? To understand the paradox, I turned to a man who has chosen a career that exposes him to a heartbreaking number of dead children, women and men. Robert Fisk is a multiple-award-winning journalist and war reporter and the Middle East correspondent for The Independent. He told me in an interview on my radio show “Uprising” that “what was remarkable about the little boy on the beach—perhaps because his face was looking downwards into the sand, and you didn’t see his eyes—it was just thought acceptable to show this photograph … and therefore of course suddenly people took notice that this really was a little boy, not a body with its face erased.”

In other words, Alan was seen as a human being—a tiny, innocent child who no one, not even heartless conservatives, could argue deserved his death.

“Here was a child who had died in one piece,” Fisk said. “It was sort of acceptable to the audience. It didn’t make them reel back in horror; it made them horrified with anguish and empathy, which was a different thing altogether.”

It would be a mistake to conclude that Alan’s death occurred because Western governments have not done enough to stop Syrian President Bashar Assad or the self-proclaimed Islamic State. Sadly, the U.K. and France are already drawing those erroneous conclusions, as evidenced by their increasing participation in the U.S.-led war. But the Kurdi family—Syrian Kurds from Kobane—suffered because of Islamic State—a phenomenon whose ascendance can be traced back to U.S. war and interference.

Nothing that Western governments are doing in response to Alan’s death actually makes death less likely for millions of people in Syria, Iraq and Afghanistan. If anything, it is the opposite. As we have seen in the past, the suffering of children is often used to justify “humanitarian intervention” from the West, which in turn causes more suffering.

While Germany and other E.U. nations are to be lauded for agreeing to accept hundreds of thousands of refugees, the resettlement privileges are only available for those who risk their lives crossing the treacherous sea and hostile nations, like Hungary, to reach safe havens.

But Alan Kurdi and his brother and mother are dead because they couldn’t simply take a flight to Canada where they initially wanted to go to avoid the cruelty and depravity of Islamic State or the bombs of Assad and the United States. Instead, Abdullah Kurdi, Alan’s father, paid a trafficker more than $5,000 to board a rickety boat that capsized and killed his entire family—a sum just about equivalent to what it might have cost him to fly the four Kurdis to Canada. Yet he could not have done the safest and most direct thing to save his family because the Canadian government had rejected his asylum application.

Legal definitions of who can go where have often been the difference between life and death for many of the world’s refugees and migrants. Meaningless pieces of paper that determine one’s geographic legitimacy are all that separate those who died crossing the Mediterranean (or Pacific Ocean or U.S. border) and those who can use the privilege of their passports or birthright citizenship or easily obtained visas to enjoy safety and security.

I was born and raised in the United Arab Emirates, but because my parents were Indian citizens, my only legal right to remain in that country was a residence visa. Once I moved to the U.S. and married a U.S. citizen, my husband could fly to the U.A.E. with me and waltz in through immigration barriers on his U.S. passport while I had to apply for a visitor’s visa—to a country I was born and raised in. (Incidentally, Persian Gulf countries like the U.A.E. and Saudi Arabia—who are both staunch U.S. allies and weapons buyers—are using those same strict visa laws to keep out Syrians, Iraqis and other refugees.)

Meanwhile, as a “legal resident” in the U.S., I could work and live legally as long as I didn’t ever inadvertently get caught up in the criminal justice system, which would probably have meant instant deportation, even though my husband and children were all U.S. citizens. Such is the absurdity of the complex and often random injustice of borders and the myriad pieces of paper that confer legitimacy or criminality on people.

In the wake of Alan Kurdi’s death, there have been several attempts to draw similarly absurd distinctions between people, particularly to distinguish between migrants and refugees. There is far greater sympathy for refugees than for migrants because the former are seen to be leaving a situation out of desperation for their lives while the latter are choosing to move. But are these distinctions really valid?

Across the globe, millions of people (perhaps billions) are trapped in places they don’t want to be—either because their government is repressive or because other governments are unwelcoming and borders trap them in place. If weapons can cross borders without visas or permits, then people should be able to as well. If jobs and profits are allowed to roam free, then people ought to as well. Since phenomena like climate change are global, created by borderless corporations, then the movement of people should be global, too. No more should we allow pieces of paper to determine whether people deserve to live and improve their circumstances or die in violence and squalor. In a world without borders, there would be far fewer dead babies like Alan Kurdi.