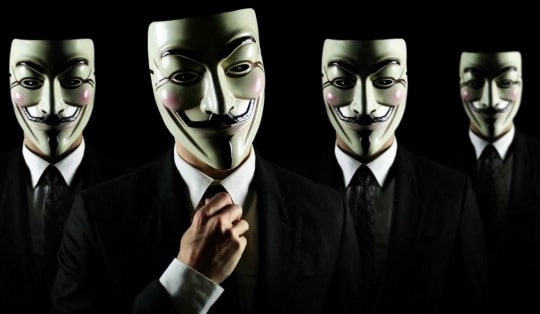 “Can a mask, meme or movement with nobody in charge make a difference?”

Today is Guy Fawkes Day in England, celebrating the foiling of the Gunpowder Plot to blow up Parliament and kill King James I in 1605.

Fawkes was one of a group of Roman Catholics who feared they were mortally threatened by a Protestant authoritarian king and government. The plotters planned to destroy Parliament and kill the king by exploding 1800 lbs of gunpowder in a cellar beneath the House of Lords.

Today will also see a Million Mask March, organized by a movement calling themselves Anonymous, who have adopted a stylized Guy Fawkes mask as a public meme. Their unofficial web site states explicitly that Anonymous is a movement, not an organization, that there is no official site, and nobody is in charge. Their movement includes a hactivist group, the Occupy movement, and other anti-establishment protesters.

The mask was developed by David Lloyd, creator and illustrator of V for Vendetta, (2006) a movie that celebrates the efforts of vigilantes to destroy an authoritarian government in a what they perceived to be a dystopian society

Lloyd notes “The Guy Fawkes mask has now become a common brand and a convenient placard to use in protest against tyranny – and I’m happy with people using it.”

Anonymous hactivists may or may not have been responsible for taking down the NSA public web site on Oct 25 with a Distributed Denial of Services (DDoS).

The original Gunpowder plotters had some grounds for their fears: The king had authorized the use of torture to extract a confession from an old woman that she had thrown a christened cat into the sea near his ship, thereby causing a storm that nearly drowned him.

The Gunpowder plot was discovered when Fawkes was caught with matches in the underground room full of gunpowder. He was tortured and sentenced to execution by being hanged, drawn and quartered, but he avoided suffering the latter punishments by jumping off the scaffold and breaking his neck.

Accusations of witchcraft and the official use of torture were widespread in Europe at the time. Between 1500 and 1660 an estimated 50,000 to 80,000 persons were executed as witches, 80% of them women. Execution rates for witchcraft varied greatly with the largest number, 26,000, in Germany.

During the same years only about a thousand witches were executed in England. Despite James I, English law never regularized torture, and in addition to a strong tradition of habeas corpus, England had strict rules of evidence, requiring proof of wrongdoing or damage for conviction.

A hundred years earlier, in 1486, a book telling what witches could do and how they should be tortured, tried, and executed was published in Germany by a couple of enterprising if not very scrupulous friars. Malleus Malificarum [Hammer of Malefactors (e.g.:witches)] covered all the bases, starting with the premise that not believing in witches was heresy. It included this charming excerpt: “What is to be thought of those witches who collect…as many as twenty or thirty [male] members together, and put them in a bird’s nest or shut them up in a box, where they move themselves like living members and eat oats and corn?”

Today hardly anyone believes that witches can make pets of penises or cause storms by dunking baptized cats. Most ordinary mortals (I hope) also understand that under torture humans will say whatever stops the pain, and most are able to reason that because the torturer controls the pain, what is revealed is what the torturer has in mind, not “truth” or anything the torture-victim knows.

Almost everything we thought we knew about witches and witchcraft had its origin in the “confessions” of people under torture, and thus was substantially fabricated out of the twisted minds and imaginations of the torturers. It’s not even fictional, let alone descriptive of reality.

It would be comforting to believe that the human race has outgrown torture and concepts of witchcraft. The British today observe Guy Fawkes Day with bonfires and hangings-in-effigy, but they don’t practice torture or burn witches, and they no longer hang, draw and quarter criminals.

Yet are we, after all, much advanced beyond the of Europe in the 15th to 17th centuries? What’s the real difference between an accusation of witchcraft and a suspicion of terrorism when both are used to justify torture and summary execution — sometimes carried out by drones?

I had hoped that Americans were waking up to the reality that our nation is under the control of a new breed of witch-hunters, people who swallow jejune fables about a nuclear bomb controlled by an evil terrorist who will only reveal its location under torture, or believe it is acceptable to secretly spy on world leaders and its own citizens, without the oversight of Congress. We have a president who believes he has the right to execute by drone anyone in the world—including a grandmother tending her garden in Pakistan. Worst of all, a substantial number of citizens apparently believe in this modern witchcraft: that terrorists are evil witches beyond redemption, and assert that not believing in a terrorism or a “war on terror” is heresy, if not treason.

This year we have had American media and public officials accusing Edward Snowden and Chelsea Manning of treason deserving death or imprisonment before they have been tried and convicted, or even charged with a specific crime. To me, the treatment they have both received is tantamount to state terrorism.

As Juan Cole recently observed: “Among the founding principles of the United States was “no taxation without representation.” But the NSA appears to be a secret kingdom that appropriates our money with no oversight or accountability. We didn’t elect it, and if it doesn’t let our chosen representatives know what it is up to, then it is taxing us without giving us any representation. It is a tyrant….Secrecy is anathema to a democratic republic….. The only real question left is what the unelected fourth branch of government… is really up to…Who do the mostly right wing NSA bureaucrats really report to if not to Obama? And, what are they really doing with our cell phone records, which reveal to whom we speak, how often, and where exactly we are?…”

Behind our Guy Fawkes masks we argue endlessly about whether we are obedient cogs in an authoritarian empire that creates its own realities, or free participants in a living democracy, relating rationally to the realities we all live in. In the meantime we overlook a simple reality of living systems: Sooner or later, those who try to create their own reality or misjudge the reality that exists, and are not continuously responsive to changes in the real world, will get selected out of the genome.

Can a mask, meme or movement with nobody in charge make a difference? Stay tuned.

You can buy a Guy Fawkes mask online. But bear in mind that Warner Brothers, the Time Warner subsidiary which produced V for Vendetta. gets royalties on every mask sold.

Caroline Arnold retired in 1997 after 12 years on the staff of US Senator John Glenn. She previously served three terms on the Kent (Ohio) Board of Education. In retirement she is active with the Kent Environmental Council and sits on the board of Family & Community Services of Portage County. Her Letters From Washington has been published as an e-Book by the Knowledge Bank of the Ohio State University Library.  E-mail: csarnold@neo.rr.com