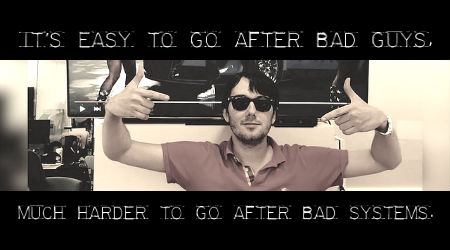 Martin Shkreli, the former hedge-fund manager turned pharmaceutical CEO who was arrested last week, has been described as a sociopath and worse.

In reality, he’s a brasher and larger version of what others in finance and corporate suites do all the time.

Federal prosecutors are charging him with conning wealthy investors.

Lying to investors is illegal, of course, but it’s perfectly normal to use hype to lure rich investors into hedge funds. And the line between the two isn’t always distinct.

Hedge funds are lightly regulated on the assumption that investors are sophisticated and can take care of themselves.

Perhaps prosecutors went after Shkreli because they couldn’t nail him for his escapades as a pharmaceutical executive, which were completely legal – although vile.

Shkreli took over a company with the rights to a 62-year-old drug used to treat toxoplasmosis, a devastating parasitic infection that can cause brain damage in babies and people withAIDS. He then promptly raised its price from $13.50 to $750 a pill.

When the media and politicians went after him, Shkreli was defiant, saying “our shareholders expect us to make as much as money as possible.” He said he wished he had raised the price even higher.

That was too much even for the Pharmaceutical Research and Manufacturers of America, Big Pharma’s trade group, which complained indignantly that Shkreli’s company was just an investment vehicle “masquerading” as a pharmaceutical company.

Maybe Big Pharma doesn’t want to admit most pharmaceutical companies have become investment vehicles. If they didn’t deliver for their investors they’d be taken over by “activist” investors and private-equity partners who would.

The hypocrisy is stunning. Just three years ago, Forbes Magazine praised Shkreli as one of its “30 under 30 in Finance” who was “battling billionaires and entrenched drug industry executives.”

Last month, Shkreli got control of a company with rights to a cheap drug used for decades to treat Chagas’ disease in Latin America. His aim was to get the drug approved in the United States and charge tens of thousands of dollars for a course of treatment.

Investors who backed Shkreli in this venture did well. The company’s share price initially shot up from under $2 to more than $40.

While other pharmaceutical companies don’t raise their drug prices fiftyfold in one fell swoop, as did Shkreli, they would if they thought it would lead to fat profits.

Most have been increasing their prices more than 10 percent a year – still far faster than inflation – on drugs used on common diseases like cancer, high cholesterol, and diabetes.

This has imposed a far bigger burden on health spending than Shkreli’s escapades, making it much harder for Americans to pay for drugs they need. Even if they’re insured, most people are paying out big sums in co-payments and deductibles.

Not to mention the impact on private insurers, Medicare, state Medicaid, prisons and the Veterans Health Administration.

And the prices of new drugs are sky-high. Pfizer’s new one to treat advanced breast cancer costs $9,850 a month.

According to an analysis by the Wall Street Journal, that price isn’t based on manufacturing or research costs.

Instead, Pfizer set the price as high as possible without pushing doctors and insurers toward alternative drugs.

But don’t all profit-maximizing firms set prices as high as they can without pushing customers toward alternatives?

Unlike most other countries, the United States doesn’t control drug prices. It leaves pricing up to the market.

Which enables drug companies to charge as much as the market will bear.

So what, exactly, did Martin Shkreli do wrong, by the standards of today’s capitalism?

He played the same game many others are playing on Wall Street and in corporate suites. He was just more audacious about it.

Hedge fund managers, for example, make big gains from trading on insider information. That robs small investors who aren’t privy to the information.

But it’s not illegal unless a trader knows the leaker was compensated – a looser standard than in any other advanced country.

Meanwhile, the pharmaceutical industry is making a fortune off average Americans, who are paying more for the drugs they need than the citizens of any other advanced country.

That’s largely because Big Pharma has wielded its political influence to avoid cost controls, to ban Medicare from using its bargaining clout to negotiate lower prices, and to allow drug companies to pay the makers of generic drugs to delay their cheaper versions.

Shkreli may be a rotten apple. But hedge funds and the pharmaceutical industry are two rotten systems that are costing Americans a bundle.