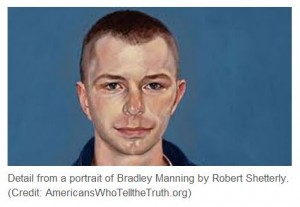 Tuesday’s verdict from a military judge does not diminish the huge moral stature of whistle-blower Bradley Manning. Next month, I will be proud to deliver a petition to the Nobel Committee in Oslo with a simple message from more than 100,000 signers: “I urge you to award the Peace Prize to Bradley Manning.”

Thanks to Manning, vast troves of information have become public knowledge, making possible more informed debate about war and peace. For instance, he leaked the now-infamous “collateral murder” video, with a soundtrack of chilling banter as U.S. servicemen in a pair of gunships fired on civilians in Baghdad.

Other evidence that Manning brought to light includes a U.S. diplomatic cable about a covered-up massacre of at least 10 civilians, including young children, in the Iraqi town of Ishaqi. That revelation stiffened the resolve of Iraq’s government to seek jurisdiction over American troops for criminal actions. Washington found the demand unacceptable, thus hastening full U.S. military withdrawal from the country.

Such disclosures from Manning “helped end the Iraq War, and may have helped prevent further conflicts elsewhere,” according to Mairead Corrigan-Maguire, a Nobel Peace laureate. She has formally nominated Manning for the honor this year, saying “I can think of no one more deserving.”

Consent of the governed is meaningful only to the extent that it is informed consent. Bradley Manning let Americans, and many others around the world, know what their governments were really doing. The disclosures caused problems for leaders in many nations who much preferred to operate behind an opaque curtain.

Over time, democracy and peace are closely entwined. Only a knowledgeable citizenry can come to grips with actual policies that perpetuate war when shielded from public scrutiny.

No government should have the power to keep waging war while using secrecy to cloak policies that cannot stand the light of day. Thank goodness for the courage of Bradley Manning.