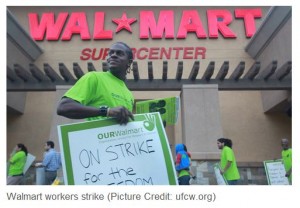 Mitt Romney famously said during his most recent bid for the presidency: “Corporations are people, my friend.” Perhaps nothing else better surmises the state of our country — even the state of our culture — than a prominent politician running for the presidency openly advancing such a flawed opinion. It is no secret that corporations now wield immense power in our elections, in our economy, and even in how we spend time with our friends and families. Corporate entities, in their massive, billion dollar efforts to advertise and “brand” themselves, not only want consumers to think of them as people, but even as “friends.” If a corporation could hit the campaign trail itself, one could imagine it uttering the phrase: “Corporations are friends, my people.”

I recently came across a full-page ad in the New York Times. The ad, which shows a tiny baby’s hand clutching the fingers of an adult hand, is captioned with the words: “Love is the most powerful thing on the planet.” It goes on to read: “For all the things in your life that make life worth living — Johnson and Johnson, for all you love.” Notably, this is Johnson and Johnson’s first “corporate branding” campaign in over a decade.

This poses an interesting question. What exactly is corporate love? Love is a very human emotion — but, coming from a business conglomerate whose over-riding goal is bigger profits — this message rings hollow.

An April 24 New York Times article (interestingly enough, the same paper the “For All You Love” ad appeared in) notes that Johnson and Johnson recalled 280 million packages of over-the-counter medication and two hip replacement models in 2010. Ten thousand lawsuits were filed as a result of these faulty hip replacements, including one lawsuit that forced Johnson and Johnson to pay out $8.3 million in damages.

Suddenly, a clearer picture begins to emerge. In this case, “corporate love” is merely a two-faced attempt to establish trust after — or in anticipation of — the disclosure of a negligent product failure. The phrase “to err is human, to forgive is divine” comes to mind. But, of course, corporations aren’t human.

The idea of “humanizing” a corporation is certainly not unique to Johnson and Johnson. Our corporate “friends” are all around us. They are dominating our publicly owned airwaves with their slogans, filling our skies with their logos on billboards, showing up on the sides of city buses, and collecting our browsing preferences so as to better appeal to us on the internet. One might say that “corporate love” has been a part of American culture as long as corporations have advertised. This idea of trust in a brand name — of allowing a corporation to “earn” your “friendship” — is one that perhaps has allowed the corporate entity to dominate so many aspects of our culture. People become attached to brands. How many people do you know that only use a certain type of shampoo or drink their preferred brand of beer?

To the younger generation, social media has become a massive part of the public forum. Look to Twitter, where companies like Walmart routinely “tweet” benign questions such as: “Cats or dogs… or both? Tell us what pet companion keeps you happy.” McDonald’s recently tweeted: “Good morning! Any big plans for the weekend?” Coca-Cola says: “Proven fact: making friends is easy when you’re bubbly, refreshing and delicious.” They’re not kidding — Coca-Cola has over a million “followers” on that website. (Who’s going to make concepts like “justice” bubbly, refreshing and delicious so as to get a million followers?”)

Don’t be fooled by these friendly panderings. These are multi-billion dollar companies attempting to win your trust to sell their products and often, to divert attention away from more disturbing truths — perhaps their products are unhealthy, or addictive, or damaging to the environment, or simply that their corporate executives regularly place profits over people. Social media accounts such as @Walmart “feign humanity and engage with users” as comedian Rob Delaney recently put it in an interview with Yahoo!

As the official Walmart account tweets: “Whew- Retweet if you agree that it’s too hot for hairdryers!” the executives that run that company choose to underpay their workers which forces taxpayers to subsidize many Walmart employees through social service programs, take advantage of communities, and use excess profits to buy back stock to line the pockets of its biggest shareholders. Given these transgressions, who cares about hairdryers?

So let’s conduct an experiment. The goal is to send a message to some of these giant corporations who are so obsessed with establishing themselves as your “friends” while taking advantage of our health, our workers, our electoral system, our government, our justice system and our economy. Take to the social media ramparts. Send out a tweet directed at the corporations you feel are the worst perpetrators of this snake-oily style of branding and question their worst offenses. Use the hashtag #corporatelove.

Let’s inform abusive companies like McDonald’s and Walmart that entities created for profit are not our buddies, but rather “legal fictions” that must be held accountable to human necessities.

Ralph Nader is a consumer advocate, lawyer, and author. His latest book is The Seventeen Solutions: Bold Ideas for Our American Future.Other recent books include, The Seventeen Traditions: Lessons from an American Childhood, Getting Steamed to Overcome Corporatism: Build It Together to Win, and “Only The Super-Rich Can Save Us” (a novel).