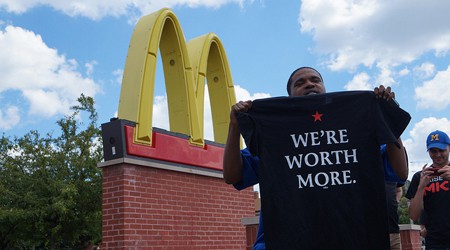 Industry trade groups are now challenging Seattle’s new minimum wage law as unconstitutional. They claim the city’s $15 an hour rate violates the 14th Amendment. Passed just after the Civil War to ensure equal rights for the newly freed slaves, that amendment says no state may “deny to any person . . . the equal protection of the laws.”

According to the industry lawsuit, the minimum wage law violates this Equal Protection Clause because it phases in the higher wage at a different schedule for franchised companies than for small local businesses.

But the trade groups’ argument twists the real intent of the 14th Amendment. Its drafters had a special interest in whether workers could earn “fair, living wages,” our research has revealed. That phrase was often used by Senator Jacob Howard, a staunch Republican who served as the 14th Amendment’s Senate floor manager in 1866.

Howard had reason to emphasize this point. Even before the Civil War ended, the Union Army was deeply concerned about whether freedmen were receiving fair wages. An 1865Army work plan, for example, instructed officers to assist freedmen in obtaining “fair wages for their labor.”

Sometimes it was a struggle to achieve this. When employers in two recalcitrant South Carolina counties persisted in underpaying the freedmen, one Army general contemplatedmoving those counties’ entire freed population to areas that would pay them “fair wages.” By 1866, a special military unit established to assist freedmen during the post-Civil War Reconstruction had resorted to distributing standard labor contracts, with fixed labor rates, that would promote “prosperous relations between capital and labor” and be “satisfactory to the freedmen.”

Many Americans viewed “fair, living wages” as an integral part of the struggle from slavery to full citizenship. The influential abolitionist editor Horace Greeley — famous for his 1865 editorial that advised “Go West, young man” — wrote a widely reprinted open letter to “the Colored People of North Carolina” on September 14, 1865. He urged them to take immediate steps to demand “fair, living wages” as part of their larger struggle for equal rights.

So when members of the special congressional committee asked whether freedmen could earn fair or living wages, they understood the issue as intimately connected with the equality that the 14th Amendment ultimately enshrined.

Given how important obtaining “fair, living wages” was to the 14th Amendment’s authors, industry lawyers have no basis to argue that the Equal Protection Clause protects thecompanies, rather than the workers. But it’s not surprising. Ever since the 14th Amendment was passed, corporate lawyers have tried to leverage it to strike down laws like Seattle’s.

In 1938, a frustrated Supreme Court justice complained that of the cases in the court in which the 14th Amendment was applied during the first 50 years after its adoption, “less than one-half of 1 percent invoked it in protection of the negro race, and more than 50 percent asked that its benefits be extended to corporations.”

Just this year, the Equal Protection Clause has been invoked on behalf of coal companies andmultinational agribusiness conglomerates.

We need to put a stop to this unfounded constitutional argument. The businesses had their opportunity to make their case to the city of Seattle — and they lost. They shouldn’t be allowed to run to court under the banner of the 14th Amendment.

When Abraham Lincoln was just a rookie congressman, hewrote that securing “to each laborer the whole product of his labor, or as nearly as possible, is a most worthy object of any good government.” That’s what Seattle’s law does. Sixteen years after Lincoln wrote that, he vowed at Gettysburg to preserve a “government of the people, by the people, [and] for the people.” That’s what the industry’s lawsuit threatens.

The congressmen of Reconstruction sought to carry forward Lincoln’s legacy with the 14th Amendment. Their vision of full equality is not yet realized. But if they could see what Seattle is trying to achieve, they would be proud.

Ron Fein is the legal director of Free Speech for People, a nonpartisan nonprofit organization that uses in legal advocacy to confront the misuse of the U.S. Constitution. He is filing a friend-of-the-court brief in the Seattle minimum wage case.