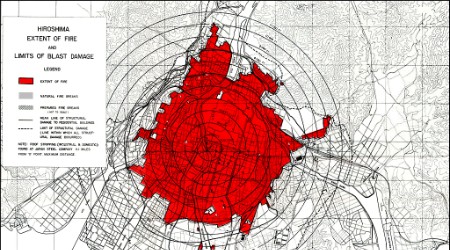 Years ago, when I lived in San Diego, I saw a Cadillac with a homemade sign taped to the window that read “If there was not a Pearl Harbor, there would not have been a Hiroshima.” The car’s specialized license plate indicated that the owner was a Pearl Harbor veteran and recipient of the Purple Heart. The combination of messages perfectly encapsulated what is often the American understanding of the atomic bombs: necessary, just and, above all, uncomplicated.

Tomorrow, Barack Obama will become the first sitting U.S. president to visit Hiroshima. It is a powerful moment for both Americans and Japanese. As a historian, I hope we can see this visit as an opportunity to open up the debate on the standard narratives of the nuclear attacks.

No American president has ever entertained visiting Hiroshima or Nagasaki. Certainly, no U.S. president or politician was ever going to apologize for the use of atomic bombs. Doing so, the rationale goes, would raise demands for reparations from victims and vilify U.S. veterans.

As Americans prepare for the presidential election, the question of whose finger we want on the proverbial nuclear button is often asked, an indication that such power is the epitome of the heavy burden of presidential authority. During the 1964 election, Lyndon B. Johnson’s campaign released the famous “Daisy” campaign ad, which featured a button-nosed little girl counting down to her own demise in a nuclear explosion, a harbinger of things to come if Barry Goldwater won the presidency. The message remains the same today: The individual character or mentality of a single person matters.

If the weight of the president’s responsibility is encapsulated in their power to authorize nuclear attacks, why do we Americans have such a difficult time discussing the decision-making — the intentionality — behind the U.S. military’s dropping of two atomic bombs on Japanese cities? More to the point, why do we find it so difficult to entertain the notion that the bombs are a stain on national history, let alone allow the possibility that they may not have been necessary to compel Japan’s surrender?

In the U.S., the historical narrative of the atomic bombs has never been included on the informal list of national traumas. This is partly due to the fact that we tell ourselves that, to be sure, deploying the bombs wrought enormous and unprecedented destruction, but it was done with the best of intentions. It saved the lives of the Allies who would have stormed the beaches of the Japanese mainland during Operation Downfall, in which thousands, hundreds of thousands, maybe even a million would have died (the estimates of casualties kept mysteriously rising in the postwar years). We are also encouraged to find comfort in the fact that the bombs saved the lives of countless Japanese civilians who were ready to throw themselves at the invaders.

The other reason the bombs are not recognized as historical trauma lies in their intentionality, or lack thereof. Americans are taught that the bombs were necessary to end the war. If a person believes the bombs were necessary, then it follows that there was no decision to be made. Such a narrative removes human agency from the decision. Moreover, U.S. history textbooks often sanitize the attacks by employing passive language and obfuscating actors, so that “a bomb was dropped from a B-29″ comes about as close as you get to understanding responsibility and intentionality in the decision.

So why were the cities of Nagasaki and Hiroshima attacked with atomic weapons? Was it to send a message to the USSR? Sure. Was it an act of revenge for the Japanese Imperial Navy’s attack on the military base in Pearl Harbor, as the homemade sign on the San Diego Cadillac said? Yep. Was it an effort to finally break the will of the Japanese imperial household and avoid an Allied land invasion? Absolutely. Was it because the bombs were so egregiously expensive and labor-intensive to produce that to not use them would have been seen as wasteful to Washington bean counters? Yes.

The U.S. dropped the bombs for all of these reasons. To deny there were political reasons for dropping the bomb does not diminish the history of the American men and women who fought in the war, but it does force us to consider what we mean when we say that the A-bombings were “necessary.” America’s history, like Japan’s, is covered in keloid scars.

Say what you will about so-called historical amnesia in Japan, but people here have been engaged in a vociferous and public debate about the war that continues unabated today. In these debates, members of the Japanese military can be remembered as heroes, perpetrators or victims. Sometimes a single person could be all of the above. In the U.S., critical debates about the bombs and the people who dropped them are taboo, considered bad taste or even a personal slight against the grandfather who barely survived the Battle of Okinawa. Such was the backlash when, in 1995, Smithsonian historians attempted to present a nuanced history of the atomic bombings that the entire project was scrapped. All that remained was a shiny B-29 fuselage that reflected only the varnished, sanitized and limited story that some Americans demanded.

Americans want to deal with the atomic bombs. A 2015 Pew Research Center study found that 56 percent of Americans think the use of the bombs were justified, down from 63 percent in 1991 and 85 percent in 1945. When we look at age ranges, the numbers are even more dramatic. Seventy percent of Americans 65 and older agreed with the decision to drop the bombs, a number that drops to 47 percent among 18-29-year-olds.

Though some American conservatives fear the president’s trip is an “apology tour,” nobody is asking him to apologize for the bombs. Not even Japanese peace groups, which are thrilled with the visit, are asking for an apology. Does anyone really think that the recent resolution between Prime Minister Shinzo Abe and South Korean President Park Geun-hye on the “comfort women” issue has meant the historical debates have ended? Of course not, nor should they.

I am not calling for an apology, nor an end to the debate on the atomic bombs. I want that debate to begin.