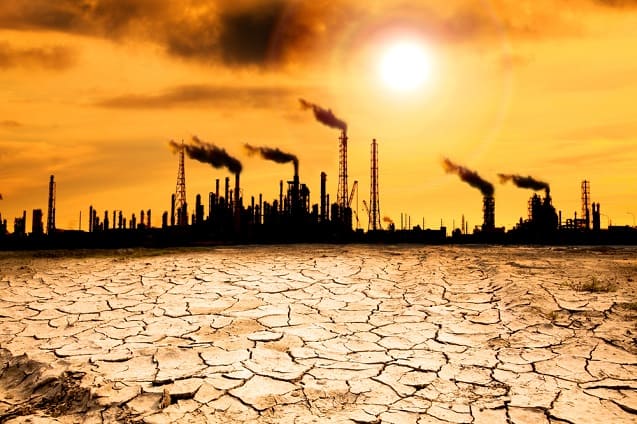 If you were standing outdoors looking at the distant and reddening sky 250 million years ago as the Permian Mass Extinction was beginning, unless you were in the region that is known as Siberia you would have no idea that a tipping point had just been passed and soon 95% of all life on earth would be dead.

It’s almost impossible to identify tipping points, except in retrospect.

For example, we have almost certainly already past the tipping point to an ice-free Arctic. And we are just now realizing it, even though that tipping point was probably passed a decade or more ago.

This is critically important because in the history of our planet there have been five times when more than half of all life on Earth died. They’re referred to as “mass extinctions.”

One – the one that killed the dinosaurs – was initiated by a meteorite striking the Earth. The rest all appear to have been initiated by tectonic and volcanic activity.

In each case, however, what happened was that massive amounts of carbon-containing greenhouse gases – principally carbon dioxide, were released from beneath the Earth’s crust and up into the atmosphere.

This provoked global warming intense enough to melt billions of tons of frozen methane on the oceans floors. That pulse of methane – an intense greenhouse gas – then brought the extinction to its full of intensity.

While in the past it took continental movement or an asteroid to break up the crust of the earth enough to release ancient stores of carbon into the atmosphere, we humans have been doing this very aggressively for the past 150 years by drilling and mining fossil fuels.

Will several centuries of burning fossil fuels release enough carbon into the atmosphere to mimic the effects of past volcanic and asteroid activity and provoke a mass extinction?

Geologists who study mass extinctions are becoming concerned. As more and more research is coming out about the massive stores of methane in the Arctic and around continental shelves, climate scientists are beginning to take notice, too.

The fossil fuel companies are sitting on roughly 2 trillion tons of underground carbon. That, in and of itself, is enough to warm the earth by 5 or 6°C, and is an amount of carbon consistent with tipping points during past mass extinctions.

There are an additional estimated 2 trillion tons of methane stored in the Arctic and probably 2 to 5 times that much around continental shelves all around the Earth.

If our burning fossil fuels warms the oceans enough that that methane melts and is quickly released into the atmosphere, the Earth will be in its sixth mass extinction.

And make no mistake about it, the animals and plants that are most heavily hit by mass extinctions are those that are largest and at the top of the food chain.

We must stop the carbon madness and move, worldwide, to renewable 21st century energy sources.

This is why we’ve produced a short documentary on this topic, and a short e-book titledThe Last Hours of Humanity: Warming the World to Extinction that you can find atwww.lasthours.org.

Please check it out and share it with as many friends as possible.

The future of humanity is at stake.

This article was first published on Truthout and any reprint or reproduction on any other website must acknowledge Truthout as the original site of publication.