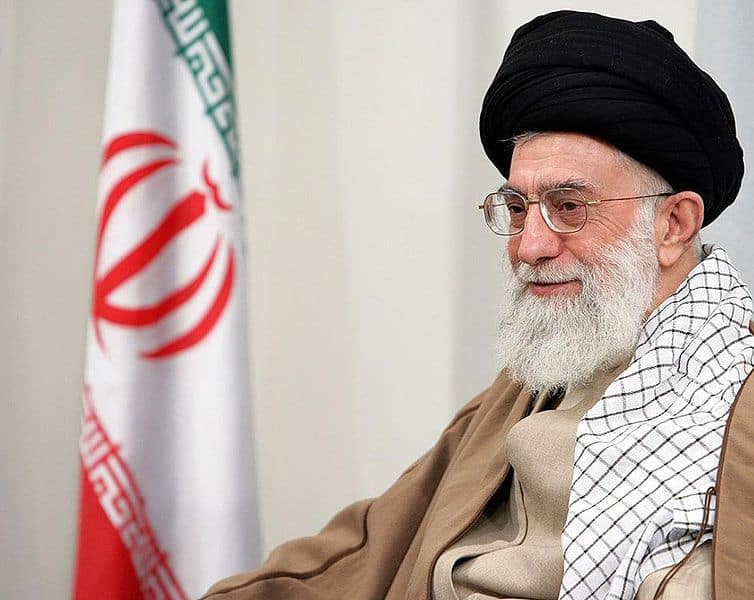 Ayatollah Ali Khamenei, the supreme leader of Iran, has said once again that his nation has no desire for a nuclear weapon and would never preemptively invade or attack a foreign nation.
(photo: Aslan Media /flickr.cc)

The clerical leader of Iran, Ali Khamenei, gave a speech on Sunday in which he urged that Iran maintain its military readiness in order to fend off any hostile invasion or attack. But, he said, “Iran has never invaded a country and never will.” He also called US charges that Iran is seeking a nuclear weapon a “myth” and “propaganda.”

Whatever else is wrong with the Islamic Republic of Iran, you have to admit that it is refreshing for a country’s leader to make such a pledge. No American politician could even run for election on such a platform, of “no conventional military attack on another country.” American politicians are always talking about keeping all options open or ‘on the table’, by which they mean that Washington might at any moment take it into its head suddenly to go to aggressive war against another country, even though that country had not attacked the US. The illegal invasion and occupation of Iraq in 2003 was only the most recent and dramatic such attack.

Iran has a small military budget, about $10 bn., on the order of that of Norway or Singapore. It has no air force to speak of. The US military budget is roughly 80 times that of Iran.

Khamenei said that Iran has a no first strike policy and is no danger to its immediate neighbors (Pakistan, Afghanistan, Turkmenistan, Azerbaijan, Armenia, Turkey, Iraq, and Kuwait), much less to countries further away (he may be referring to Israel and Yemen).

What about Khamenei’s claim that Iran hasn’t invaded another country? He probably meant the the Islamic Republic has launched no wars of aggression since its founding in 1979. This is true. In 1980 Iraq invaded Iran. Iran fought the invaders to a standstill and ultimately made peace, making no effort to occupy Iraqi territory.

Iran did invade Herat in Afghanistan in the 1850s, but Iranians argue that Herat had long been part of the Iranian empire and so Iran was just recovering what was theirs. Before that, Iran invaded Iraq in 1785 and took Basra. So it has been a long time.

Critics of Iran will complain that it does support Hizbullah and the al-Assad regime in Syria and the Houthis in Yemen. This is true, though the latter has been exaggerated. But offering an ally strategic advice or logistical help on demand is different from invading with tanks.

Those who only read the US press on Iran’s civilian nuclear enrichment program may be surprised to see Khamenei deny that Iran wants a nuclear bomb. But he has been saying this all along. He said in 2006 of US criticisms of his country:

“Their other issue is [their assertion] that Iran seeks [a] nuclear bomb. It is an irrelevant and wrong statement, it is a sheer lie. We do not need a nuclear bomb. We do not have any objectives or aspirations for which we will need to use a nuclear bomb. We consider using nuclear weapons against Islamic rules. We have announced this openly. We think imposing the costs of building and maintaining nuclear weapons on our nation is unnecessary. Building such weapons and their maintenance are costly. By no means we deem it right to impose these costs on the people. We do not need those weapons. Unlike the Americans who want to rule the world with force, we do not claim to control the world and therefore do not need a nuclear bomb.”

Khamenei has repeated this stance numerous times, but the US media can’t seem to hear him say it. He considers nuclear bombs to be against Islamic law, since they kill large numbers of innocent non-combatants, including women and children, when deployed. Of course, he could be lying. But that is sort of like the Pope maintaining a condom factory in the basement of the Vatican. You have to ask yourself, why ban something religiously that you intend to promote in actuality? If the contradiction became known, it would damage the religious leader’s credibility.

According to the BBC Monitoring translation of Khamenei.ir , Khamenei said:

“Iran not “a threat” to any country

The Islamic Republic is not a threat to any country. We have never been a threat even to our neighbours, let alone to distant countries. Our contemporary history clearly shows this. Even when some of our neighbours treated us not in a neighbourly manner, we showed restraint. Iran has never invaded a country and never will. The fake myth of nuclear weapons has been devised by America and then Europe and some other bootlickers in order to portray the Islamic Republic as a threat.”

Khamenei went on to point out that it is the USA that has illegally launched wars of aggression in the Middle East, along with Israel. Iran, he said, never has.

I think he was pointing to Iraq when he said, “Even in some cases it has graciously forgiven the bad attitude of its neighbours. Insecurity is coming from the direction of unleashed powers which take over everywhere.”

As for Yemen, while Iran stands accused of giving military aid to the rebel Houthi movement, that charge is not easy to prove. It seems unlikely that the Houthis needed Iran to launch their protest movement. It is Saudi Arabia and its allies, including the USA, who have launched an attack on the Houthis even though they did not attack Saudi Arabia. Khamenei in his speech said that Iran is merely helping countries that have been attacked.

Today, these heartbreaking events are happening in Yemen and the Americans support the tyrant. The West supports the tyrant. Insecurity is coming from their direction. It is them who make countries unsafe, and make the environment insecure for people to live in. It is them who bring insecurity. The Islamic Republic of Iran considers security as the biggest divine gift both for itself and others and stands up for its security and defends it.”

h/t to BBC Monitoring for translations.

Juan Cole teaches Middle Eastern and South Asian history at the University of Michigan. His new book, The New Arabs: How the Millennial Generation Is Changing the Middle East (Simon and Schuster), will officially be published July 1st. He is also the author of Engaging the Muslim World and Napoleon’s Egypt: Invading the Middle East (both Palgrave Macmillan). He has appeared widely on television, radio and on op-ed pages as a commentator on Middle East affairs, and has a regular column at Salon.com. He has written, edited, or translated 14 books and has authored 60 journal articles. His weblog on the contemporary Middle East is Informed Comment.