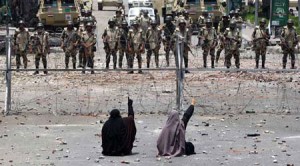 Secretary of State John Kerry’s praise for the Egyptian army this week comes in the wake of two bloody massacres carried out by the army against supporters of ousted president Mohammed Morsi and his Muslim Brotherhood.

In late July, one bloody massacre saw more than 100 Morsi supporters killed in an eight-hour bloodbath, in which, according to on-the-ground reports, army snipers shot to kill. “There were so many corpses arriving at Cairo’s Zeinhom mortuary that the street outside was blocked with a queue of orange ambulances,” reported my close friend and Guardian Cairo correspondent Patrick Kingsley at the time, commenting that “in post-revolutionary Cairo, now more divided than ever after the toppling of Morsi on 3 July, the narrative of history is rarely straightforward.”

Kingsley’s point is important: The ousted Islamist leader offered no promise of the sort of Democracy that Egyptian Arab Spring revolutionaries had fought for in ousting Hosni Mubarak. Morsi was the first democratically elected Egyptian leader in decades, but promised little in the way of democratic progress, for which Egyptians had struggled and died in 2011. But, and this is crucial, the Egyptian army is brutalizing and slaughtering en masse Morsi’s Islamist supporters, entrenching fierce sectarian divisions. It is in this context, which, as Kingsley noted, is far from straightforward, that the U.S. Secretary of State offered what the New York Times called “the strongest endorsement yet by the United States of the military intervention, which the Obama administration has refused to call a coup.”

With blood of Islamists on the street, Kerry praised the army for “restoring democracy.” His remarks, of course condemned broadly by members of the Muslim Brotherhood and their supporters, illustrate a long-standing U.S. attitude towards the Egyptian army and the Middle East in general.

Speaking to Kingsley via phone, the Guardian journalist noted that, indeed, Morsi was not interested in ushering in what many would view as democracy. But, he noted, “what the army and the army-backed cabinet are doing is not promising and is in need of censure.”

“There’s a danger that without external censure, internally widespread support for violent crackdowns on Islamist groups continues unchecked,” Kingsley told me, adding “it’s dangerous for anyone to swing behind the army right now.”

Kingsley shares my awareness, however, that official U.S. attitudes towards Egypt have little to do with nuance; the U.S. is dedicated to protecting its own interests in the Middle East, and as Kingsley put it, “that means keeping the Egyptian army sweet.” Indeed, the U.S. sends $1.3 billion worth of weaponry and vehicles to the Egyptian army yearly, a support structure considered instrumental in preserving peace with Israel (something potentially threatened when the Muslim Brotherhood were in power).

It’s the same politicking that has prevented the U.S. government from calling Morsi’s ouster a “coup.” As the Times reported:

Using that term would require the United States to suspend its annual $1.5 billion aid package, a move that American officials assert would further destabilize Egypt. Instead, the administration has found a way to avoid the question altogether, deciding last week that it was not legally required to determine whether the military had engineered a coup or not.

Meanwhile, during his visit to Pakistan, Kerry said that a violent crackdown on pro-Morsi protesters, who are carrying out thousands-strong sit-ins in two of Cairo’s main squares, was “unacceptable.” Such a crackdown “cannot happen,” said Kerry.

But those on the ground, like Kingsley, have seen two massacres in recent weeks, with morgues too full to contain the corpses. These details — the bloody truths of a nation in turmoil — give the lie to Kerry’s purported support for the army “restoring democracy” in Egypt. Kingsley’s point bears repeating: When it comes to revolutions, the narrative of history is rarely so straightforward.