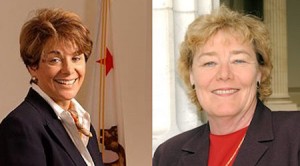 We ask the President to make his case in the light of public scrutiny, not by “classified” briefings that are kept from the American people and which Members of Congress are prohibited from discussing publicly. This debate will have its needed effect only if it is fully transparent.

We are pleased that President Obama will seek Congressional authorization before engaging in any military hostilities against Syria.

That authorization is legally and constitutionally required – the President cannot legally act alone without the U.S. Congress. This construct is part of the genius of our nation’s democratic system and our Constitutional checks and balances.

We welcome the opportunity to listen to the facts of this matter in the most public forum. While a review of the evidence, both classified and unclassified, as to the use of chemical is important, we are already inclined to believe that these horrific weapons were used based on public and social media accounts. We believe that the question before the U.S. Congress is not “can the Obama Administration prove that the Syrian government used chemical weapons?” Rather, the paramount question is, if that is true, “what is the best course for the United States to take, and why?”

Here are just a few of the questions that are at the heart of what Congress must debate as we and our colleagues determine the best course for the United States to take:

• What role should the United States play in enforcing international treaties prohibiting the use of chemical weapons?

• International treaties are frequently violated by various nations. What precedent does it set if the United States acts in this case? Will the U.S. be placed in a position where we must respond whenever treaties are seriously violated? If not, why?

• Civilian massacres have occurred in other countries without U.S. military intervention and are occurring today in Egypt, for example. Would action in Syria set a precedent for action in other parts of the world? If not, why not?

• Should the U.S. take action when international bodies, including the UN and NATO, have declined to do so?

• Should the U.S. take action when the United Nations has asked that we not do so?

• Should the U.S. act when other nations decline to participate with our country in taking such action, including Great Britain? Arab nations?

• If action is taken by the United States what impact will it have on the future behavior of the Assad regime? On what basis are we concluding that Syria will change its behavior based on a U.S. attack on Syrian targets?

• How would U.S. military action against Syria make the American people safer? The Syrian people? The people of Israel?

• If a U.S. attack assists the rebels in overthrowing the Assad regime, who takes over in Syria? If the Assad regime falls, will further civil war ensue between competing rebel factions? What role will Al Qaeda play?

• The Syrian civil war is also a proxy war for other powers, including Saudi Arabia, Iran, Russia and other non-state actors such as Hezbollah and Al Qaeda. What impact would U.S. action have on these other actors?

• Will the unrest in Syria spread in the region if the U.S. acts? If the U.S. does not act?

• What impact would U.S. action have on our closest ally in the region, Israel? Would a U.S. attack on Syria lead to retaliatory attacks against Israel or others? What will the reaction of Israel be in that case? What U.S. action would then be required?

• If our country decides that some action by the U.S. is required, what should that action be? Should further diplomatic efforts, as opposed to military action, be considered? Are there feasible sanctions that could be put in place? Other actions?

• If military action is proposed, what are the targets, the scope and the cost? What is expected to be accomplished and how will that serve the interests of the United States? Syria? The Middle East? The World?

• What is our strategy for Syria (and for the Middle East generally) and how would military action support or damage that strategy?

• If the Assad regime, or even the rebels, were to engage in actions that appear to violate international treaties including the use of chemical weapons in the future what action would the U.S. take? What would be the consequences of further action or inaction in such a case in terms of spread of war, entanglement of the U.S. in the Syrian civil war, U.S. reputation around the world, and the perception of American strength and resolve by Iran and North Korea? To what extent is the U.S. “painting ourselves into a corner” by attacking Syria now? Will that force us to attack again in response to further violations? If not, why?

• What impact would U.S. military action have on relations between Russia and our country? What are the short and long term implications for Russia and the U.S., including efforts to continue the reduction of nuclear arms by our two nations?

• What are the possible adverse results of U.S. military action in Syria? What steps have been taken to address those potential adverse impacts? What is the “end game?”

We hope the Congressional debate will be carried out at the highest level, with the result that the United States acts, or does not act, after the most deliberative consideration. In that regard, we ask the President to make his case in the light of public scrutiny, not by “classified” briefings that are kept from the American people and which Members of Congress are prohibited from discussing publicly. This debate will have its needed effect only if it is fully transparent.

We pledge to our constituents and fellow Americans that we will carefully weigh the facts and options that face the United States at this juncture. We look forward to debating and hearing answers to these questions, and other relevant ones that may emerge, as we examine the facts and further hear from our constituents on this very serious issue facing our country.