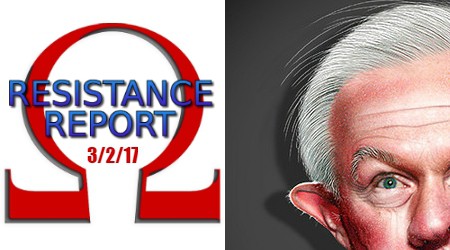 Attorney General Jeff Sessions can pencil in “liar” right after “bigot” on his résumé. After declaring at his confirmation hearing — where he was under oath to tell the truth, the whole, etc. — that he had no meetings with Russian government officials, it turns out that “no” actually means “two”.

German Lopez, Vox.com: Jeff Sessions, under oath, said he didn’t communicate with Russians. A new report says he did.

Sessions seems to misunderstand the allegations in his statement. It’s not whether he met with Russian officials to discuss issues of the campaign, but whether he spoke with them in any capacity despite telling Congress he had no communications with Russians.

The latest moves by two senior Republicans amount to a sign that, little by little, the protective wall the GOP has built around President Trump is beginning to erode, though there is still a long, long way to go before we can expect any serious oversight.

If senators of both parties allow an attorney general nominee to plainly lie under oath with no repercussions, they will render our government’s cabinet confirmation process no more than kabuki theater.