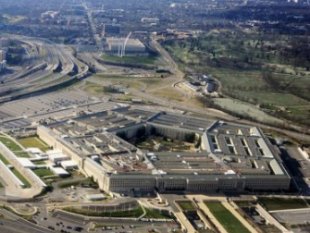 The Pentagon, shown December 26, 2011, said Thursday a suspicious substance in a US naval mailroom near Washington turned out to be harmless, amid jitters in the capital after ricin-laced letters were sent to a senator and President Barack Obama.

Is America an empire or not? It is a loaded question because in the modern age, that word — empire — is not a moniker citizens proudly embrace in the way we might imagine the Ottomans or the Romans did during their reigns. Instead, the word today evokes images of the Death Star. And so we shirk the term’s implications and insinuations, much as President Obama did this week at the United Nations.

“The United States has a hard-earned humility when it comes to our ability to determine events inside other countries,” he declared in his speech to the General Assembly. “The notion of American empire may be useful propaganda, but it isn’t borne out by America’s current policy.”

The rhetoric sounds nice and it deftly portrays the United States as the sympathetic victim of an international conspiracy. The problem is that it glosses over how current U.S. policies do, in fact, create an imperial footprint.

This is most easy to see when it comes to our military. According to a 2010 report by the Pentagon, the United States has 662 overseas bases in 38 different countries. Additionally, the United States recently invaded and occupied Iraq and Afghanistan and helped invade Libya. It is also prosecuting undeclared wars in Yemen and Pakistan, while propping up dictators in most of the Middle East. Oh, and we are also the world’s biggest exporter of weapons and spend more on our military than most of the world combined.

On the intelligence side of things, it is a similar story. The National Security Administration is not only collecting domestic communications, it is constructing a global surveillance system. That includes collecting communications data from countries across the world, surveilling heads of state in Brazil and Mexico, hacking computers at the Indian embassy, spying on the United Nations and wiretapping Brazil’s state-owned oil company. And that’s just what we know about.

To know if this is imperial behavior, simply ask yourself whether you would label another country an empire if it were doing this kind of thing. Of course you would (and you’d probably call that nation even worse things, too).

At his United Nations speech, though, President Obama justified this all as something wholly different from empire. In a signature Obama-ism, he portrayed the United States’ actions as a benevolent effort to prevent “a vacuum of leadership” — but not an imperial project worthy of international resentment.

Yet, that whole “vacuum” idea is, unto itself, an imperial concept — one straight out of the “Star Wars” trilogy. In the megalomanical words of Darth Vader, it assumes that there must be one dominant power to “bring order” to the world — and it further assumes that without such an empire, there will be unacceptable chaos.

Such presuppositions are a failure of both imagination and foresight. They outright reject the notion of a multipolar world of truly sovereign nations — and they ignore the fact that such a multipolar world will be a reality, whether we like it or not. Indeed, though we’ve been telling ourselves since the end of the Cold War that we are the world’s sole superpower, the rise of China, India and Brazil, the re-emergence of Russia and the persistent power of the European Union say otherwise.

The inability to acknowledge this changing reality, in fact, is the ultimate sign that for all the rhetoric to the contrary, the United States government does see itself as running an empire. Such intransigence and hubris, after all, have defined the decline of empires into the very chaos they so fear. Perhaps the only way to halt such a decline is to finally admit we are an empire — and then take the necessary steps to start shedding that label for good.

David Sirota is the best-selling author of the books “Hostile Takeover,” “The Uprising” and “Back to Our Future.” Email him at ds@davidsirota.com, follow him on Twitter @davidsirota or visit his website at www.davidsirota.com.