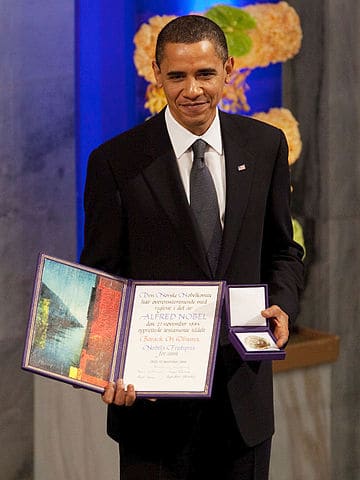 President Barack Obama with the Nobel Prize medal and diploma during the Nobel Peace Prize ceremony in Raadhuset Main Hall at Oslo City Hall in Oslo, Norway on 10 December 2009.

“To understand the nature of the present war — for in spite of the regrouping which occurs every few years, it is always the same war — one must realize in the first place that it is impossible for it to be decisive.” — “1984” by George Orwell

Barack Obama originally ran for president as the anti-war candidate. Now, as his second term winds down, the two George W. Bush/Obama wars are winding up, with a third in Syria. U.S. military forces are deployed elsewhere around the globe, as in drone striking in Yemen and Somalia, adding to the global conflagration. The United States is engaged in endless war.

The crisis of war and the millions fleeing these infernos has reached levels unprecedented since World War II, prompting the United Nations and International Committee of the Red Cross (ICRC) to issue what they called an “unprecedented joint warning” for states to end wars, respect international law and aid the 60 million refugees made homeless from recent conflicts.

United Nations Secretary-General Ban Ki-moon said: “The continuing violence is a clear indication that a political solution to the conflict in Syria is desperately needed. The fighting must stop now. There is no military solution to the crisis, not in Syria or anywhere else. From Afghanistan to the Central African Republic, from Ukraine to Yemen, combatants and those who control them are defying humanity’s most basic rules.”

ICRC President Peter Maurer added: “When humanitarian law and principles are disregarded, when humanitarian needs are trumped by political agendas, when access to the wounded and sick is denied, and when security concerns lead to a suspension of operations, people are abandoned, the notion of protection loses its meaning, and humanity is flouted. We ask that states reaffirm our shared humanity by concrete action and uphold their responsibility to respect and ensure respect for international humanitarian law.”

The joint plea of these leaders came shortly after U.S. Secretary of Defense Ash Carter mentioned that the U.S. military would be engaging in “direct action” in Iraq and Syria. White House press secretary Josh Earnest confirmed in a briefing that troops had been deployed to Syria. He said, “The president did make a decision to intensify that support by offering a small number of U.S. special operations military personnel to offer them some advice and assistance on the ground as they take the fight to ISIL.”

The conflict in Syria has become one with numerous internal actors and an increasing number of outside participants, waging proxy wars with conflicting interests. The U.S. and Russia are there, as is Iran and Shiite militias under their control, and their allies from Hezbollah. U.S.-backed Kurdish peshmerga are being attacked by Turkey, a U.S. ally. ISIS, the so-called Islamic State, is fighting the Assad government, but it is also fighting al-Qaida-linked groups like the Khorasan Group and the al-Nusra Front.

“Only by taking stock of the full magnitude of our military failure can we come to an appreciation of the imperative of beginning to think differently about our approach to the region,” Andrew Bacevich told me on the “Democracy Now!” news hour. Bacevich is a retired colonel, Boston University professor and Vietnam veteran. “The alternative, it seems to me, is to recognize that there are some wars that are unwinnable and should not be fought. If there is a solution to the problem, it has to come from nonmilitary means,” he added. Like Bacevich, his son was an Army officer. He was killed while serving in Iraq in 2007.

Finding an end to this ever-widening war is the responsibility of us all.

Back in 2001, when the Bush administration sought congressional approval to attack Afghanistan after 9/11, only one member of Congress voted no, California Rep. Barbara Lee. “September 11th changed the world. Our deepest fears now haunt us. Yet, I am convinced that military action will not prevent further acts of international terrorism against the United States,” she said in her two-minute plea from the House floor. “As a member of the clergy so eloquently said, ‘As we act, let us not become the evil that we deplore.’”

It is much more difficult to wage peace than to wage war.