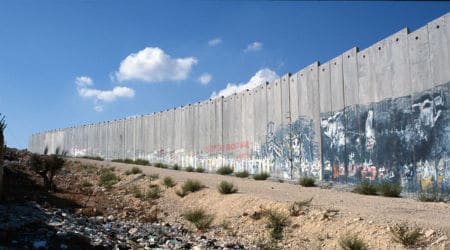 This current wave of “lone-wolf” attacks by Palestinians against Israelis poses a threat to the Israeli government unlike any other. Obviously I am not referring to the security risk they pose — after all, Israel has far more deaths and injuries from car accidents. Nor am I referring to the fear this onslaught of attacks may be causing Israelis. No, the real threat is that for the first time since the First Intifada, almost 30 years ago, the Israeli government has nobody to blame.

I can’t imagine the frustration at Netanyahu’s cabinet meetings. Israel’s knee-jerk reaction is to blame a certain party, and then bomb them. That’s why it was so useful having Yasser Arafat from mid-1990s until his demise. Whatever happened, whoever did it, Arafat was always to blame. I was a journalist covering the story at the time, and I can still see the tanks at the presidential compound, the Muqataa, in Ramallah.

But now who is Israel going to bomb? I’m certain at least one security official has uttered the words, “let’s bomb them,” and I really do sympathize with the Israeli government at this juncture. It’s got to be really tough not having anyone to blame and not being able to just bomb them.

And the bombing is really just the icing on the cake. Netanyahu and his cronies get to go on television, blame “X” for attacks and state that Israel has the right to self defense. Their lackeys in the U.S., be it Hillary Clinton or Chuck Schumer, repeat the exact same phrases on American TV and it becomes fact, and the ensuing war crimes are explained away as self defense by a country that is hated by all of its neighbors.

Netanyahu tried blaming President Abbas for this wave of violence, but that obviously didn’t hold water. While over two dozen Palestinians were being killed over the span of two weeks, the Palestinian president was out dedicating new roads and attending celebratory events. He’s so out of touch with the Palestinian street that it’s impossible to tie him to the current violence.

Clearly the Israelis haven’t found anyone to blame, but that’s only because they’re not looking in the right place. Here’s a short list of where they should be looking.

Let’s start with the obvious. No Palestinian under 50 living in the West Bank, and to an extent the Gaza Strip, has known a day of freedom in his or her entire life. No freedom of movement, no freedom of worship, no sense of personal safety or stability.

The noose is tightened by the actions of the Israeli military and police. Averaged out, Israel has killed over 10 Palestinians per week over the past 15 years, according to statistics compiled by B’Tselem. Granted, some of these Palestinians were engaged in violently resisting the Israeli occupation, but the vast majority were not. Who among us wouldn’t be angry if they heard three of their neighbors weremurdered when their house was firebombed, or to see entire neighborhoods of your country decimated?

And this is further exacerbated by the presence of armed settlers who are protected by the Israeli military and police, even while committing violent crimes. This double standard that exists in relation to breaking the peace, and even the law, is stifling. There is little doubt that if a band of Palestinians walked up to an Israeli settlement and set fire to its fields that Israeli forces would open fire on them. It took only a couple of days for Israeli forces to arrest suspects in the killing of the couple in their car a few weeks ago. But what about justice for the Palestinian family that was burnt alive? How many times have Israeli settlers attacked Palestinian villagers while Israeli soldiers stood in their midst and the moment the Palestinians come out to defend their village, they are fired upon by soldier and settler alike. And now, even a mere accusation of attempting a stabbing is enough to get a Palestinian killed, even without evidence of a knife.

So if the Israeli cabinet is looking for someone or something to blame, blame the occupation. Blame the double standards. Blame the military and paramilitary forces that have no connection to any semblance of a moral compass. And then, instead of bombing, perhaps now might be a good time to make amends. Because the desperation among Palestinians is only going to increase. And as we have seen from the past three weeks, there are many who just can’t take it anymore.

Talal Jabari is a Palestinian award-winning documentary filmmaker and journalist from East Jerusalem. He tweets from @TalalJabari.