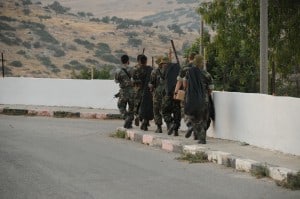 How Israel justifies the immanent relocation of thousands of Palestinian Bedouin by characterizing them as invaders.

On June 24th the “Prawer Plan for the Arrangement of Bedouin-Palestinian Settlement in the Negev” passed its first reading in the Israeli parliament. If implemented, the Plan will constitute “the largest single act of forced displacement of Arab citizens of Israel since the 1950s,” expelling an estimated forty thousand Palestinian Bedouin from their current dwellings.

The Plan’s ultimate objective is to Judaize the Israeli Negev. In order to do this, however, seventy thousand(out of 200,000) Bedouin who currently live in villages classified as ‘unrecognized’ by the Israeli government must be moved. The government already forbids them from connecting to the electricity grid or the water and sewage systems. Construction regulations are also harshly enforced, and in 2011 alone about a thousand Bedouin homes and animal pens—usually referred to by the government as mere “structures”—were demolished. There are no paved roads, and signposts from main roads to the villages are removed by government authorities. The villages are not shown on maps, since as a matter of official geography, the places inhabited by these second-class citizens of Israel do not exist.

The government has, for years, argued that because these people live in small villages scattered across a relatively large area, it cannot provide them with basic services and therefore its objective has been to concentrate them in a few townships. Consequently, in 2009 Prime Minister Binyamin Netanyahu appointed his planning policy chief, Ehud Prawer, to liberate the “Jewish land.” Prawer’s main task was to relocate these seventy thousand Bedouin who have refused to sign over their property rights to the State and have continued living in their “unrecognized villages.”

The logic informing the plan is actually best expressed in two reports Silent Conquest andThere is a Solution published by a settler NGO called Regavim (The National Land Protection Trust), which has been working in conjunction with several government agencies.  The NGO maintains that the Negev’s Bedouin inhabitants “rob” the Jewish people “of the Land of Israel” “ever so quietly, without the roar of battle and clamor of war.” “On this battlefield,” the organization continues,

cement mixers have replaced tanks, plows replace cannons and innocent-looking civilians replace uniformed soldiers….  Acre after acre, house after house, buying, squatting, illegally cultivating the soil that is not theirs, sometimes with guile, other times with violence, with huge sums of money and firmly backed by anti-Zionist organizations in Israel and abroad – Israel is losing its hold on the Jewish people’s lands.

Regavim further maintains that Israel has until now “offered the Bedouins ‘carrots’ –but never a ‘stick,’” claiming that through their “criminal activity” these Beduin are colonizing the land and thus threatening to “put an end to the Jewish future of the Southern region.”

Citing Prime Minister David Ben-Gurion’s famous declaration that “The Negev is the test of the nation in Israel,” Regavim offers a four stage solution to counter this threat, which includes: curbing “illegal Bedouin construction,” preparing the population for removal, evacuating all the “illegal populations” and then transferring them to legal settlements. Finally, the government must prepare for “the day after” and not allow “matters to return to their original state.” “Original state” refers to the existing situation, which in Regavim’s view is characterized by the invasion of Jewish space by Palestinian “illegal populations.” According to this narrative, space is, by definition, Jewish and therefore non-Jewish presence is a form of contamination—and the stake of Ben-Gurion’s test.

The transformation of the indigenous into an invader or a “Palestinian settler” – to borrow thephrase recently used by Deputy Defense Minister Danny Danon(Likud)– is key to understanding not only the Prawer Plan, but also the very logic of the State of Israel. In a context in which Palestinians have been systematically alienated and elided from history and geography, the constitution of the Palestinian native as an illegal subject or foreign invader serves as the condition of possibility for Judiazing the land. The ethos in which all this is being played out is grounded in Israel’s ethnocratic commitment to dispossess the non-Jews, which is cynically elevated to an act of self-defense and, ultimately, justice.

Neve Gordon is an Israeli activist and the author of Israel’s Occupation.

Nicola Perugini is an anthropologist who teaches at the Al Quds Bard Honors College in Jerusalem. His work focuses on colonialism, space and law. He is currently a visiting scholar at the Institute for Advanced Study in Princeton.