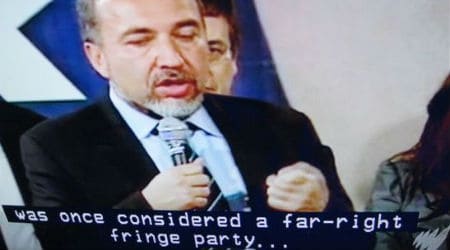 It’s hard to imagine Prime Minister Benjamin Netanyahu making a more reckless and irresponsible decision than appointing Avigdor Lieberman defense minister.
For the second time since the last election Netanyahu had to choose between the Zionist Union and the extreme right, and once again he chose to veer right and establish an ideological, racist coalition that aims to entrench the occupation, expand the settlements in the territories, oppress the Arab minority and undermine Israeli democracy.

Yisrael Beiteinu’s leader has for many years represented a racist position that views Israel’s Arab citizens as a nuisance and their Knesset representatives as traitors. He calls for an aggressive defense policy, the reoccupation of the Gaza Strip and the overthrow of the territory’s Hamas government and the economically destruction of the Palestinian Authority, which in his opinion encourages, incites toward and is responsible for attacks on Israelis.

In recent weeks he has led the political struggle on behalf of Elor Azaria, the soldier who executed a dying Palestinian assailant in Hebron. Lieberman called for Azaria to be released from arrest and not charged with manslaughter.

When he was foreign minister Lieberman did very little, but his ability to cause damage to the state was limited. Now he will be in charge of the army and of the occupation machine in the territories, with an almost unlimited potential to foment crises and to jeopardize the national interest.

He will be able to sign off on massive building plans in the settlements, end the security coordination with the PA, strive for a confrontation with Hamas in the south, intensify the blockade of the Gaza Strip, bar the employment of Palestinians in Israel and encourage violations of the laws of war.

Lieberman’s support for Azaria and for closing the investigation of Col. Yisrael Shomer, who shot and killed a Palestinian teenager as he fled after throwing rocks at the officer’s vehicle, signals to soldiers and police officers that the political leadership expects them to shoot first and ask questions later, that executing a mortally wounded person or a fleeing teen is behavior worthy of support and encouragement, not investigation and prosecution.

His call for the declaration of a state of emergency in Israel, “like in France after the attack in Paris” is especially worrisome: Lieberman would like to suspend freedom of expression in favor of freedom to shoot.

It was only a month ago that Netanyahu (in the name of Likud), described Lieberman as a lazy amateur, “a petty prattler” who wasn’t even fit to be a military analyst. Now Netanyahu is entrusting the defense establishment to a man for whom “the only projectile to ever whistle past his ear was a tennis ball.”

At the moment of truth, the prime minister has demonstrated that he is prepared to drag the country into a potentially disastrous military adventure, to remove all moral constraints and to encourage blatant racism, for the sole purpose of staying in power. The high price will be paid by Israel’s citizens and their Palestinian neighbors.