Israel – Palestine: This dance of death was only a matter time 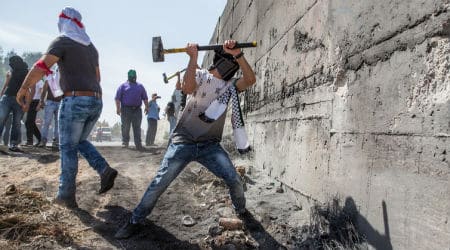 Ingmar Bergman’s classic 1957 film The Seventh Seal tells of a medieval knight who returns to Sweden from the Crusades, only to find that the plague has swept his country. At this point, Death (personified as a tall, pale figure in a black cowl) appears to the knight, informing him that his time on earth is up.

Not wanting to face up to the inevitable, the knight challenges Death to a game of chess, believing that as long as the game is ongoing, he will not have to accept his fate. Except eventually of course, the game ends — Death wins both the match and the bet. The final scene of the film shows Death leading the knight and his followers over the horizon in a scene that has come to be known as “the dance of death.”

As I write this on Tuesday afternoon, three Israelis have been killed over the course of a few hours following a double attack in Jerusalem that involved shooting, stabbing and running over Israeli civilians with a vehicle. One of the alleged Palestinian attackers was shot dead at the scene of the attack.

The incidents took place alongside two stabbing attacks in the central Israeli town of Ra’anana that left several Israelis wounded in an exceptionally violent morning, even by the standards of a gruesome fortnight that has seen dozens of Israelis wounded and four more killed in stabbing and shooting attacks. Meanwhile nearly 30 Palestinians have been killed by Israeli security forces either while demonstrating, following a stabbing attackor — in the IDF’s own words — “by accident.” The number of Palestinians injured since the beginning of October has passed the 1,000 mark.

The terminology one applies to this latest spike in violence is academic. It also distracts from the underlying and fundamental issue: that successive Israeli leaders have, like the knight in The Seventh Seal, tried to cheat the inevitable, which in this case is the end of the occupation. Israeli leaders continuously choose the path of dodging fate, notching up one Pyrrhic victory after another over the Palestinians in an attempt to buy a little more time, seize a little more land, and shore up a little more political support.

For the time being — as my colleague Noam Sheizaf recently wrote on this site — Israel still holds the tools to end the occupation with a degree of control over the matter. And it will and must end; such a combustible situation, in which millions of Palestinians are bottled up and subject to the one-two of both random and structural violence that military occupation brings, cannot continue indefinitely.

Flare-ups such as the current “wave of violence” (which is only the “latest round” for Israelis — arbitrary lethal violence is a daily fact of life for Palestinians under occupation and siege) may act as a valve to temporarily release pressure. Ultimately, however, a meltdown is unavoidable. If the recalcitrance of the Israeli leadership — of whom Benjamin Netanhyahu is simply the latest, and probably worst, incarnation — continues, the occupation will not be ended on Israel’s behalf. The unpredictability of such a process does not need spelling out and risks coming at a price greater than anything we have witnessed until now.

Yet as things stand, we seem further away than ever from an end to the violence, let alone any kind of negotiation. The attacks feel limitless and borderless. There is something, too, in the fact that after last summer’s hi-tech bloodletting in Gaza, we are now seeing a very low-tech burst of violence. This is face-to-face, intimate killing — on both the Israeli and Palestinian sides — and somehow more shocking for it. It’s more immediate, more personal.

Moreover, the current social media phenomenon of post-killing “money shots” and low-resolution snuff films is dragging us even closer to the violence. Bloodied, contorted bodies are in the palms of our hands, hovering before our eyes, branded behind our eyes. One wonders what this makes us, will make of us. I fear not only for my Israeli and Palestinian friends’ lives, but also for all of our mental stability.

During the 1982 Lebanon War, IDF Lt.-Col. Dov Yermiya spoke of Israel as a nation that “dances at the edge of destruction.” His words ring louder than ever in the current situation. Yet this is a dance of death and destruction that Israel’s leaders have chosen — through myopia, through greed, through simple cowardice. And unless real leadership emerges from somewhere, there is no knowing where we will be when the music stops.