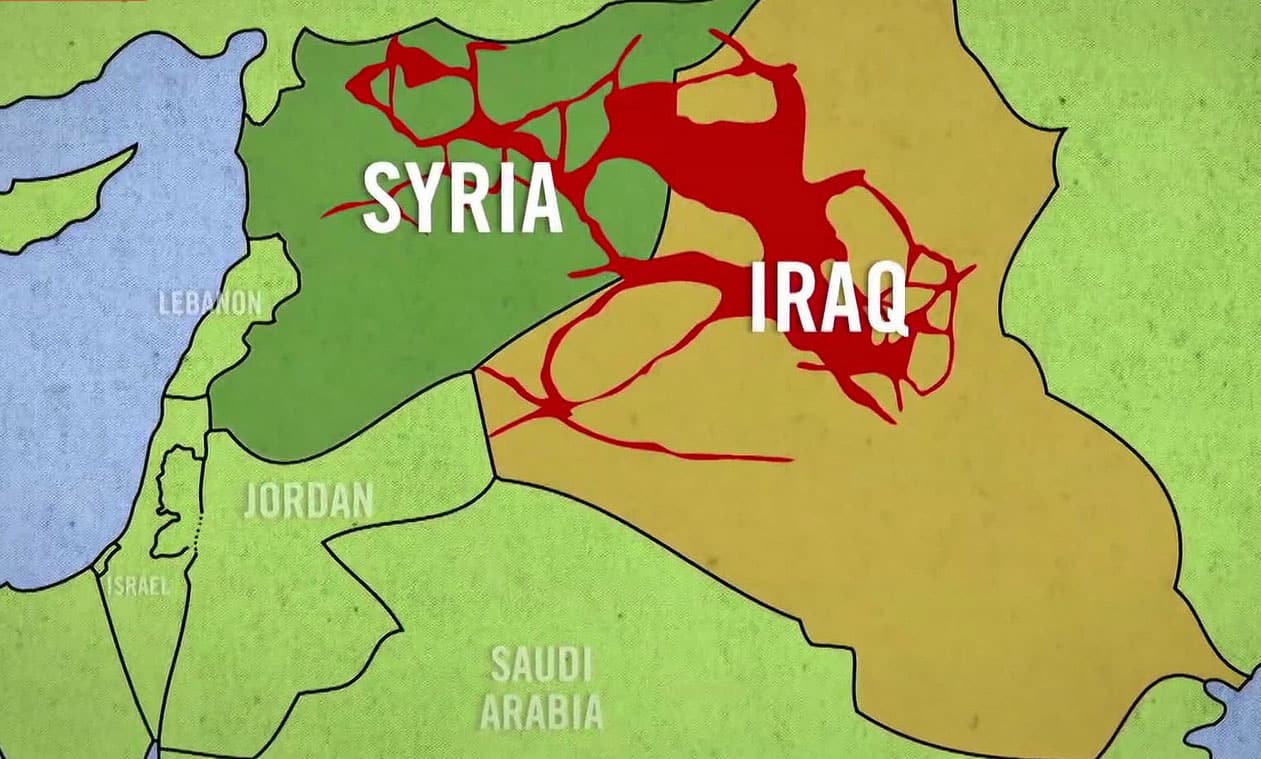 The Islamic State of Iraq and Syria(ISIS) is our Frankenstein. The United States after a decade of war in Iraq pieced together its body parts. We jolted it into life. We bathed it in blood and trauma. And we gave it its intelligence. Its dark and vicious heart of vengeance and war is our heart. It kills as we kill. It tortures as we torture. It carries out conquest as we carry out conquest. It is building a state driven by hatred for American occupation, a product of the death, horror and destruction we visited on the Middle East. ISIS now controls an area the size of Texas. It is erasing the borders established by French and British colonial powers through the 1916 Sykes-Picot Agreement. There is little we can do to stop it.

ISIS, ironically, is perhaps the only example of successful nation-building in the contemporary Middle East, despite the billions of dollars we have squandered in Iraq and Afghanistan. Its quest for an ethnically pure Sunni state mirrors the quest for a Jewish state eventually carved out of Palestine in 1948. Its tactics are much like those of the Jewish guerrillas who used violence, terrorism, foreign fighters, clandestine arms shipments and foreign money, along with horrific ethnic cleansing and the massacre of hundreds of Arab civilians, to create Israel. Antagonistic ISIS and Israeli states, infected by religious fundamentalism, would be irreconcilable neighbors. This is a recipe for apocalyptic warfare. We provided the ingredients.

I and Loretta Napoleoni, the author of the book “The Islamic Phoenix,”spoke at a Dec. 2 eventin Manhattan at the headquarters of the New York Society for Ethical Culture. Napoleoni pointed out that the message imparted to Muslims by ISIS is radically different from that of other jihadist groups, especially al-Qaida. ISIS does not call for martyrdom and self-immolation. It has launched a jihad against secular and discredited regimes in the Middle East rather than against Western targets abroad. It is seeking to establish, as the Zionists did in Palestine, a utopian, religious state. It holds up the ancient Caliphate—which united Muslims throughout the Middle East in the seventh century and whose time is considered the golden age of Islam—as an ideal, much as Jews held up the biblical kingdoms chronicled in the Hebrew Bible. ISIS, to build its state, has called on engineers, doctors and technicians to immigrate to the area it controls. And ISIS, although devoted to a fundamentalist form ofSalafist Islam, is thoroughly modern. It has mastered sophisticated forms of electronic communication and delivers its messages through social media. And unlike groups such as al-Qaida, which bans television sets and radios, it views the technical advances of modern society as an asset. The mixture of fundamentalist religion with modernity is a potent and intoxicating brew for disenfranchised Muslims. And ISIS has attained what peaceful uprisings in the Middle East have not—liberation from detested regimes, at least for now.

“Modern technology and a clear understanding of how our multipolar world functions, however, are not enough to succeed,” Napoleoni writes of the uprisings known as the Arab Spring. “Is it possible that the ‘smartphone uprisings,’ including the Arab Spring, failed where the Islamic State has succeeded because the latter is managed by a professional elite, which guides the rank and file, while the former finds itself at the mercy of their constant interaction and participation? If so, is the Islamic State’s model of nation-building more modern than that of the Arab Spring?”

Terror, as was true for the Jewish fighters in Palestine in the late 1940s, is an effective tool to intimidate opponents and accelerate ethnic cleansing. The fear of ISIS is its most potent weapon. Iraqi army troops, although better armed than ISIS fighters and outnumbering them, drop their U.S.-supplied weapons and flee before ISIS. Shiites abandon whole villages to ISIS. And all the U.S. advisers sent to put some spine in the Iraqi government forces have so far been unable to significantly stem the advance.

Sunni militants in Iraq consciously orchestrated the conflict between Sunnis and Shiites. This clash, as was true in the former Yugoslavia, is not the result of ancient ethnic hatreds. It was created for political expediency.When Abu Musab al-Zarqawi, a Jordanian radical, arrived in Iraq, he founded al-Tawhid al-Jihad. His group used forged documents to infiltrate over 100 fighters from al-Qaida, most of whom had been in Afghanistan, into Iraq. Zarqawi’s goal was to spark, under the cover of fighting the Western coalition forces, a sectarian conflict with the Shiites. He understood that a unified Shiite and Sunni state would thwart the dream of a Sunni Islamic state. He had to ignite a religious war. His group, in 2004, eventually became al-Qaida in Iraq and declared its loyalty to Osama bin Laden, who had initially rejected Zarqawi’s tactic of attacking Shiites. Zarqawi was killed in 2006. His death was followed a year later by the so-called Sunni awakening. By 2010 the radical group was almost extinct.

Abu Bakr al-Baghdadi, who claims to be a direct descendant of the Prophet and who holds a degree in Islamic studies from the University of Baghdad, was held in 2004 by U.S. forces in southern Iraq’s Camp Bucca, where he built a following among his fellow prisoners. He took over the leadership of Zarqawi’s organization, changed the name of the group to the Islamic State of Iraq and moved its members to Syria to fight in the civil war there. Once there, he amassed weapons and cash pouring into Syria from countries such as Saudi Arabia, Kuwait and Qatar. He used these resources to rebuild his group, not to help the rebels overthrow the Syrian regime. He began attacking other jihadist and rebel groups and craved out territory under his exclusive control. Al-Nusra, the al-Qaida-affiliated group in Syria, merged with the Islamic State of Iraq. The new group became the Islamic State of Iraq and Syria, or ISIS. ISIS has now seized control of enough resources to be self-sufficient. The group is estimated by The Wall Street Journal to earn $2 million a day in oil exports alone. And it has attracted an estimated 12,000 foreign fighters, including 2,000 from Europe. In June 2014 it declared the establishment of a new caliphate. The historical Caliphate, which lasted from the Prophet Muhammad’s death in 632 to 661, controlled a vast empire that stretched from the Arabian Peninsula and the Levant across North Africa and up to Central Asia. And religious militants have long held it up as the ideal for the Muslim state they seek to create. By 2011 Baghdadi had been designated by the U.S. State Department as a “specially designated global terrorist.”The United States has posted a reward of up to $10 million for information leading to his capture or death.

“Technically speaking, the Caliphate is the religious and political authority that is above everybody else,” Napoleoni said earlier this month before the Society for Ethical Culture. “Every single Muslim government is automatically below the Caliph. This is a huge threat to countries like Saudi Arabia.”

ISIS is a mortal threat to the House of Saud. It is a open challenge to the religious authority of the Saudi ruling family, which is the custodian of Mecca, the site of the holiest shrine in Islam. It challenges, by anointing Baghdadi as caliph, the right of the Saudis to determine religious doctrine. And Baghdadi, in the eyes of many Muslims, has the aura that surrounded partisan leaders such as the Yugoslav Josip Broz Tito during World War II. Foreign recruits, crossing over the border from Turkey into Syria, will often fall to their knees, weep and pray before entering ISIS’ new Caliphate.

The danger, Napoleoni pointed out, is not that ISIS will invade Saudi Arabia, but that it will delegitimize the Saudi monarchy. This, she said, could trigger an upheaval inside the kingdom and threaten the viability of one of Washington’s most important allies in the Middle East. The group is seen as an anti-imperialist force because it is erasing the borders within the old Middle East drawn after World War I by European cartographers and because it defies the client states that are allied with Washington or, in the case of Syria, with Russia and the Shiite government in Tehran. Tribal communities, cut in half in the wake of World War I, are being reunited. At the same time ISIS is restoring a semblance of law and order, although the harsh Islamic law it imposes is unforgiving to those deemed to be apostates, including the Shiites.

“They are very sensitive to the needs of the population,” Napoleoni said of ISIS. The population, she pointed out, has “been plagued by war for a very long time. They have been plagued by warlords, by criminal groups, by jihadi groups, you name it. All of a sudden the Islamic State comes in and works so that people can have access to basic infrastructure such as water or electricity. They set up joint ventures with the local people in order to give the local people the opportunity to grow economically … and also to go back to the normality of life.”

This brutal order has ended the chaos that has dominated much of the region following the U.S. occupation of Iraq. It has instilled in Sunnis pride and even a feeling of omnipotence. And it has exposed as weak and ineffectual the corrupt forces that Washington put into place to administer Iraq.

“They are protecting the people from the internal, criminal organizations, warlords,” Napoleoni went on. “They are protecting the borders from the outside enemies. … I call it the shell state because of course these people don’t have the right of self-determination. They seek their consensus inside in order to achieve the kind of political identity that will transform a state shell into a real state. I think this is absolutely outstanding for an armed organization, because you know at the end of the day these guys are terrorists.”