Isis Faces Likely Defeat in Battles Across Iraq and Syria – But What Happens Next? 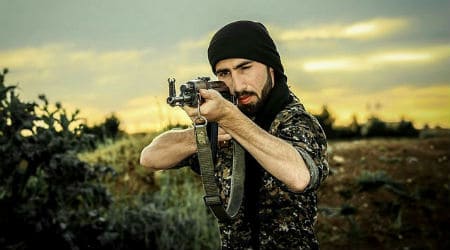 By Patrick Cockburn
The Independent

Isis is under attack in and around the last three big cities it holds in Iraq and Syria –Fallujah, Mosul and Raqqa. It is likely to lose these battles because its lightly armed if fanatical infantry, fighting from fixed positions, cannot withstand air strikes called in by specialised ground forces. They must choose between retreating and reverting to guerrilla war or suffering devastating losses.

It is two years since Isis launched itself on the world by capturing Mosul, the second largest city in Iraq, though it had already taken Fallujah 40 miles west of Baghdad at the start of 2014. In its first campaigns, its ability to achieve surprise by using mobile columns of vehicles packed with experienced fighters was astonishingly effective.

It had developed these military techniques in the years of warfare that followed the US invasion of Iraq in 2003, first fighting the Americans and later the Iraqi army. Its menu of tactics combined ideological fanaticism with a high degree of expertise and rigorous training, and was distinguished by the mass use of suicide bombers, snipers, IEDs, booby traps and mortar teams.

Atrocities highly publicised through the internet terrified and demoralised opponents even before Isis fighters appeared and go a long way to explaining why an Iraqi army, far superior to Isis in numbers and equipment, broke up and fled when Isis attacked it in Mosul in 2014.

But these tactics no longer work as well as they once did. All the armies battling Isis are trained to eliminate suicide bombers before they get close enough to kill. Isis can still recruit young men – and occasionally women – willing to die, but these days they seldom inflict mass casualties among enemy soldiers as they used to do.

Last weekend, six suicide bombers attacked the front line between Mosul and the Kurdish capital, but although they all died blowing themselves up or were killed before doing so, they only succeeded in wounding a single Kurdish Peshmerga. Like the Japanese Kamikaze pilots who attacked US and British ships in 1944-45, suicide bombers are achieving diminishing returns against better prepared defences.

Peshmerga advancing towards Mosul in the past few days are accompanied by excavators to dig trenches immediately in front of their forces as soon as possible so bombers cannot reach them with vehicles full of explosives. Unfortunately, suicide bomber are still able to slaughter civilians in great numbers by attacking undefended targets such as markets, pilgrimages, checkpoints and hospitals.

Isis is not the all-conquering military force it once was, but the war in Iraq and Syria is as much about politics as military success. At issue for all involved in the conflict in its present phase is not only the breaking Isis control of territory, but determining who will rule there in place of Isis.

Continue reading at The Independent