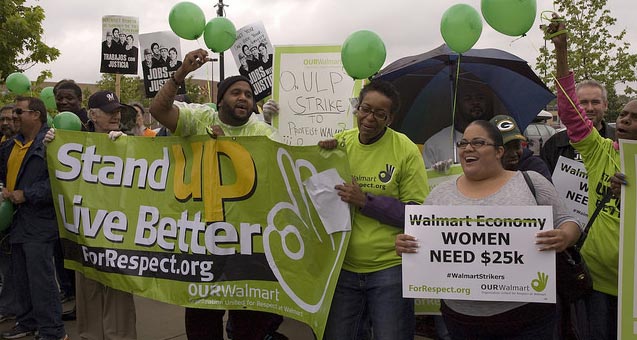 Walmart loves keeping track of data. For instance, the retail giant’s researchers know that before and after major storms, customers buy strawberry Pop-Tarts at a rate that’s seven times faster than normal.

How does Walmart use this data? To stock its shelves with more — or less — of a certain good based on consumer demand.

When no storms are in the forecast, Walmart doesn’t need as many strawberry Pop-Tarts. Known as just-in-time ordering, this approach allows the company to maximize its profit by predicting consumer behavior.

Lately, Walmart has taken to treating its workers just like Pop-Tarts.

The majority of Walmart workers earn less than $25,000 a year. It’s hard enough to eke by on that income, which teeters just above the official poverty line for a family of four. In addition, these big-box workers must contend with just-in-time scheduling.

The practice is just what it sounds like: a system where employers set workers’ hours according to the ebbs and flows of consumer activity.

Unlike Pop-Tarts, of course, Walmart workers are people whose lives get totally upended by unpredictable scheduling. These workers may find themselves scheduled to work 40 hours one week and 15 hours the next. This puts their personal lives and economic livelihoods in constant upheaval.

How would you feel if you never knew from one week to the next how many hours you’d be working, which shifts, and on which days?

Workers report that Walmart retaliates against workers who demand steadier hours or more predictability by cutting their hours even more. The company rewards workers who are always available — like Pop-Tarts — with more hours.

Here’s what happened to Tiffany Beroid, a customer service manager at the Walmart in Laurel, Maryland. After she requested a more regular schedule because she had decided to enroll in college, Beroid’s supervisor cut her hours so drastically that she couldn’t keep up with her tuition payments. She had to drop out.

“I started working at Walmart because I thought if I worked hard, I could give my family a stable home and lift us out of poverty,” Beroid said. Instead, she explained to federal lawmakers last month, “Walmart punished me for not being available at all hours and cut my hours well beyond what was needed.”

Ronee Hinton, another worker at the Laurel Walmart, said that its unpredictable scheduling prevents her from being able to get a second job. “Even though I work at the country’s largest employer and want to work full-time, I don’t know when I will work from week to week.”

Unpredictable scheduling derailed Tiffany Beroid’s career plan to get out of poverty and prevented Ronee Hinton from taking a second job to pay the bills.

“Workers need scheduling predictability so they can arrange for child care, pick up kids from school, or take an elderly parent to the doctor,” explained Representative George Miller (D-CA).

Some members of Congress are taking action. Representatives Miller and Rosa DeLauro (D-CT) alongside Senators Elizabeth Warren of Massachusetts and Tom Harkin of Iowa introduced the Schedules That Work Act. This bill would require employers to provide more predictable and stable schedules for workers. It would also protect workers against retaliation for requesting schedule changes.

This legislation would make a real difference for countless women and men in the retail industry. In the current do-nothing Congress, however, it’s unlikely to pass. As the nation’s largest employer, Walmart should take the lead on this issue and stop treating people like Pop-Tarts.

Marjorie Elizabeth Wood is an economic policy associate at the Institute for Policy Studies and the Managing Editor of Inequality.org. IPS-dc.org