Is the War on ISIS Illegal? 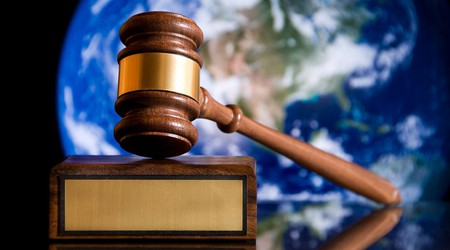 By Zoë Carpenter
The Nation

Last year, when President Obama declared his intention to take the United States off “perpetual war footing,” he identified a crucial mechanism for doing so: repealing the resolution that Congress passed in 2001 authorizing George W. Bush to use military force against those who “planned, authorized, committed or aided” in the September 11 attacks—namely, Al Qaeda.

“Unless we discipline our thinking, our definitions, our actions, we may be drawn into more wars we don’t need to fight or continue to grant presidents unbound powers more suited for traditional armed conflicts between nation states,” Obama said during the speech, adding that his intention was to “refine and ultimately repeal the AUMF’s mandate.”

Now, as the president seeks to vastly expand the footprint of American military action in Iraq and Syria, he’s using that very same 2001 authorization as legal justification for skirting Congress. “I have the authority to address the threat of ISIL,” Obama declared on Wednesday evening in a speech laying out his plans for an indefinite military campaign against militants in Iraq and Syria. He said he would “welcome congressional support,” but indicated he wouldn’t wait for it.

“We believe he can rely on the 2001 AUMF for the airstrikes he is authorizing against ISIL,” senior administration officials said on a press call before the speech. The administration does believe it needs Congress to explicitly approve funding to train and equip Syrian rebels, which is part of the strategy Obama outlined on Wednesday.

The administration’s reliance on the AUMF isn’t just ironic. It’s also based on very tenuous logic. The White House argues the resolution covers a multi-country war on ISIL because the organization is “the true inheritor of Usama bin Laden’s legacy,” according to a statement from the administration, “notwithstanding the recent public split between [Al Qaeda]’s senior leadership and ISIL.”

Some legal scholars view this argument skeptically. Writing in Time, Harvard law professor and former Justice Department official Jack Goldsmith called it “unconvincing,” noting that “if this remarkably loose affiliation with Al Qaeda brings a terrorist organization under the 2001 law, then Congress has authorized the President to use force endlessly against practically any ambitious jihadist terrorist group that fights against the United States.”

Members of Congress have also expressed doubt about the legal justification. “It is my view that the president possesses existing authorities to strike ISIL in the short term, but that a prolonged military campaign will require a congressionally-approved Authorization for Use of Military Force,” Senate Foreign Relations Committee Chairman Bob Menendez said in a statement. The campaign will most certainly be “prolonged,” as Obama stated clearly that the goal is to “ultimately destroy” ISIS, rather than simply contain it. There are a number of other lawmakers from both sides of the aisle calling on the president to seek authorization from Congress, as my colleague John Nichols reports—something the majority of Americans want, too.

The White House’s dismissal of the need for congressional approval is also in conflict with positions Obama himself expressed as a presidential candidate. “The President does not have power under the Constitution to unilaterally authorize a military attack in a situation that does not involve stopping an actual or imminent threat to the nation,” Obama declared to The Boston Globe in 2008.

The situation in Iraq and Syria does not appear to meet that standard. Obama acknowledged on Wednesday that “[w]e have not yet detected specific plotting against our homeland.” Meanwhile, intelligence sources say that the threat from ISIS has been grossly exaggerated. “It’s hard to imagine a better indication of the ability of elected officials and TV talking heads to spin the public into a panic, with claims that the nation is honeycombed with sleeper cells, that operatives are streaming across the border into Texas or that the group will soon be spraying Ebola virus on mass transit systems—all on the basis of no corroborated information,” former State Department counterterrorism adviser Daniel Benjamin told The New York Times.

It’s worth noting that the legality of an extended cross-border campaign isn’t only a question of the separation of powers. As Eli Lake noted at The Daily Beast, the White House has not explained the basis for the strikes under international law.

While the administration’s current attempt to circumnavigate Congress is hypocritical as well as potentially illegal, it’s also consistent with the way Obama has exercised US military power before. As Spencer Ackerman notes, he’s extended drone strikes across the Middle East and North Africa; initiated a seven-month air campaign in Libya without congressional approval; prolonged the war in Afghanistan; and, in recent months, ordered more than 1,000 troops back into Iraq. Promises of no boots on the ground notwithstanding, Obama’s war footprint is large, and expanding.