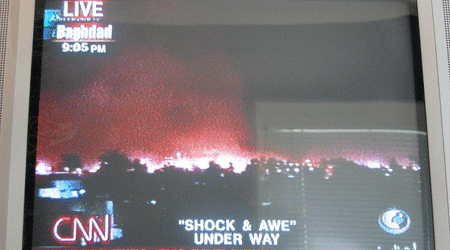 The Daesh (ISIL or ISIS) burning of a captured Jordanian pilot alive produced justified revulsion globally, resulting in the terrorist organization being termed “barbarous” and similar epithets. Why did it behave this way? Because it wants to terrify its opponents into submission and underline that it is too crazy to be messed with. In short, it was a form of ‘shock and awe.’ It was all the more horrible for being inflicted on a single, known individual with a premeditated and inexorable viciousness, and for being carefully filmed and shared on the internet (successfully tempting Rupert Murdoch’s Fox News into rebroadcasting it).

“Shock and Awe” was the slogan pushed by the Bush administration for its massive bombing campaign against Iraq in March-April of 2003. It conducted 29,200 air strikes in the course of the initial invasion. Many of those missions were flown against what turned out to be empty Baath government facilities in hopes of killing high government officials (mostly that did not happen). But you can’t drop 500-pound bombs on a densely populated city without killing innocent bystanders. Likely the first two months of US bombing left at the very least 2,760 civilians dead.*

A study based on the conservative “Iraq Body Count” found that in Iraq, “46 per cent of the victims of US air strikes whose gender could be determined were female and 39 per cent were children.”

But the slaughter from the air was great not only among civilians but among military personnel, many of whom had no opportunity to surrender or run away (when US ground forces approaching the capital were surprised to come upon elements of a Republican Guard tank division they thought had been destroyed, the Iraqi tank personnel exited their vehicles and decamped en masse; those discovered by A-10 tank killers or Apache helicopters were not afforded that opportunity).

Speaking of burning people alive, one technique the US used was the BLU-82B, a 15,000 pound bomb detonated near the ground with a blast radius of about 5000 feet, but leaving no crater. It was intended to intimidate by burning up large numbers of infantrymen or armored personnel. (It is sometimes misidentified as a fuel-air bomb or ‘daisy cutter’ but is much more powerful than the latter). It was retired in 2008 in favor of something even more destructive.

In the 2003 invasion, The Guardian reported,

“The 1st Marine Expeditionary Force crossed the Tigris at the town of Kut, reporting only occasional fire from the Baghdad infantry division of the Republican Guard, which had suffered days of intense bombardment, including two massive 15,000lb “daisy-cutter” fuel-air bombs. Gen Brooks said the Baghdad division, which originally had up to 12,000 troops, had been “destroyed”.

I think a lot of the ‘destroyed’ troops were burned up alive.

The purpose of the bombing was to terrify Iraqis into submitting. That is, it was a form of state terrorism. Iraq had not attacked the US. There was no casus belli or legitimate legal grounds for war. The UN Security Council, despite wooing and arm-twisting by Bush officials, declined to authorize the use of force. It was an illegal act of unadulterated aggression with no obvious provocation that led to the deaths of hundreds of thousands of Iraqis, the wounding of millions, and rendered four million of the 25 million Iraqis homeless over time (many of these remain displaced to this day; some have thrown in with Daesh as a result).

The US shock and awe campaign failed to shock or awe. The Iraqi military turned guerrilla and harried US troops for 8 1/2 years, then many of the ex-Baath officers and trained soldiers deserted secular nationalism, turned to al-Qaeda-type ideologies, formed Daesh and took over western and northern Iraq and eastern Syria.

The ex-Baath officers learned from seeing their colleagues and troops burned up by the Bush fireworks. According to that doctrine, you want to shock the enemy with your brutality and destructiveness, and awe him into submission by your crazed irrationality. But the Daesh commanders also took the lesson that dropping 15,000 pound bombs in the dead of the night away from cameras isn’t very effective, since the populace is insulated from the horror. Burning up even one captured enemy pilot alive on video, in contrast, would be broadcast by the internet and by Rupert Murdoch to the whole world, and a few thousand thugs could arrange for themselves to take on global importance and appear truly menacing to Jordan and even to the city of Rome (so they claim). All this publicity and fear accomplished not with billions in military spending but a smartphone camera, a single captive, and a few psychopaths with matches.

Now that is Shock and Awe. Shocking in its fierce savagery, awing in its wanton inhumanity. But we shouldn’t forget that that was also what Bush was going for in 2003 when he inadvertently started the process of creating Daesh as a backlash to his own monumental ruthlessness.

———————
* Iraq Body Count gives 24,865 civilian casualties during the first two years of the Iraq War, attributing 37% of these to the US and estimating that 30% of civilian deaths occurred from the beginning of the war until May 1, 2003. Iraq Body Count statistics were gathered passively from Western newspaper reports and personally I think that they are underestimates.