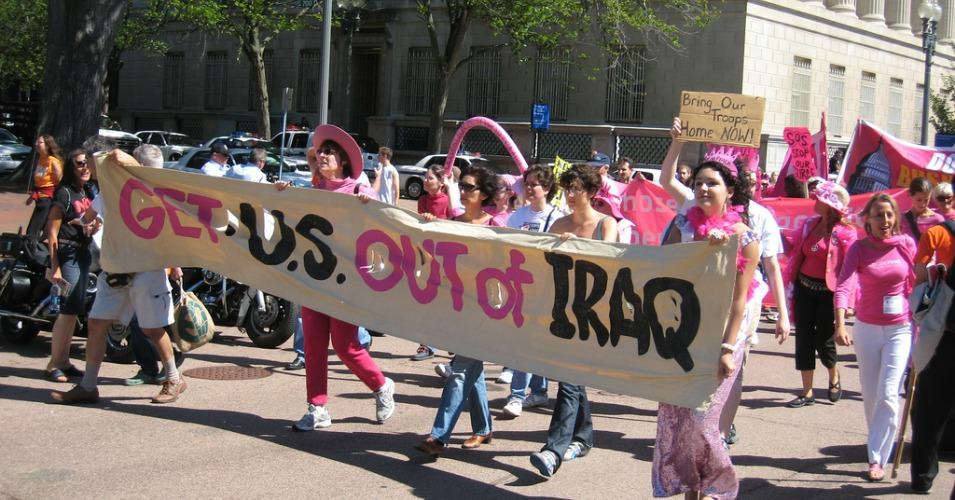 March 19 marks two gloomy anniversaries: the 12th anniversary of US invasion of Iraq and the 5th anniversary of the NATO intervention in Libya. Both overthrew Arab dictators; both left the local people in such horrific straits that many of them look back with nostalgia to the days of Saddam Hussein and Muammar Qaddafi.

I was in Iraq with a dozen of my CODEPINK colleagues a month before the US invasion in 2003. While we found a country wracked by 13 years of draconian Western sanctions and a people scared to openly criticize Saddam Hussein, we also found a middle class country with an extremely well-educated population where women made up the majority of university students and participated in all aspects of public life.

I’ll never forget my first conversation with an Iraqi woman in Baghdad, Eman Khammas. “Oh, you’re from the United States,” she remarked in perfect English. “Who is your favorite black woman poet? Do you like Nikki Giovanni or June Jordan or Alice Walker?” Taken aback, I asked how she knew about these women. “I studied them when I was doing my English degree at the University of Baghdad,” she replied somewhat condescendingly, as if that were common knowledge.

Today Khammas and her family are refugees, as are millions of Iraqis who were forced to flee the violence unleashed by “Operation Iraqi Freedom.” By 2007, the United Nations High Commissioner for Refugees said that the number of people fleeing Iraq reached 2 million and that within Iraq there were an estimated 1.7 million internally displaced people. With the civil war raging today, that number has only increased, as have deaths. An academic studypublished in 2013 found that nearly half a million Iraqis had died from war-related causes since the US-led invasion in 2003.

While military contractors made out like bandits, US taxpayers wasted $1.7 trillion dollars on the Iraq war, money that could have funded healthcare and education here at home. American families lost 4,488 of their loved ones, with tens of thousands of veterans suffering from PTSD and other war-related maladies.

Yes, the US overthrew Saddam Hussein, but it also destroyed the nation’s infrastructure and tore asunder the societal fabric. By disbanding the entire Iraqi military and bureaucracy, and supporting a sectarian Shia government, the US created a power vacuum — a space for ISIS to seize power. ISIS currently controls a huge swath of Iraq, some 13,000 square miles, and wreaks havoc on the predominantly Shia’a population by carrying out ethnic cleansing, taking women as slaves, beheading children, and displacing entire communities.

Libya is a similarly tragic tale. When the peaceful protests against Muammar Gaddafi were met with government violence, an armed rebellion emerged that called for military help from the West. With NATO’s help in this “humanitarian intervention,” Gaddafi was overthrown in October 2011. A summary of the intervention in the prestigious journal Foreign Affairs concluded: “By any measure, NATO succeeded in Libya. It saved tens of thousands of lives from almost certain destruction. It conducted an air campaign of unparalleled precision, which, although not perfect, greatly minimized collateral damage. It enabled the Libyan opposition to overthrow one of the world’s longest-ruling dictators. And it accomplished all of this without a single allied casualty and at a cost — $1.1 billion for the United States and several billion dollars overall — that was a fraction of that spent on previous interventions in the Balkans, Afghanistan, and Iraq.”

Before the “liberation,” Libya was the richest country in Africa. It provided all Libyans with free healthcare and education. Today Libyans have almost no functioning public services, with daily blackouts and water shortages.

On the anniversaries of these two epic failures in Iraq and Libya, anti-war activists are gathering for four days of actions from March 18-21. They will protest the past interventions, the present-day US participation in wars in the Middle East and the possibility of a new war with Iran. “As people are being killed by the Empire every day, billions of dollars that could be used for education, housing, healthcare, and sustainable and clean forms of energy are being poured into these Imperial wars for the profit of a few and the heartache of many,” said Spring Rising organizer Cindy Sheehan, a mother whose son was killed in Iraq.

The activities include a “spring cleaning of Congress,” where activists will march into the offices of the most hawkish members of Congress, dusting off the cobwebs of war and the fingerprints of military contractors. They’ll take a bus tour of warmakers and their enablers, including the Pentagon, the FBI, the lobby group AIPAC and the right-wing American Enterprise Institute. The gathering will culminate at a rally at the White House on Saturday, March 21.

In an interview with VICE news, for the first time President Obama admitted that ISIS was a “direct outgrowth of al-Qaida in Iraq that grew out of our invasion.” He called it an example of “unintended consequences.” But his conclusion that we should “aim before we shoot” was off the mark. A more accurate conclusion is that we shouldn’t shoot at all, we shouldn’t invade other people’s countries and try to socially engineer their societies to ally with our economic interests.

On our trip to Iraq under Saddam Hussein in 2003, in hushed voices, a group of women told us that they wanted to be freed from the oppressive regime they were living under. But with the US invasion pending, they pleaded with us, “Go home and tell your government that our liberation will not come on the wings of US bombs or from the barrels of US guns. Go home and tell your government that we will liberate ourselves.” If only our leaders would listen.

Medea Benjamin (medea@globalexchange.org), cofounder of Global Exchange and CODEPINK: Women for Peace, is the author of Drone Warfare: Killing by Remote Control. Her previous books include Don’t Be Afraid Gringo: A Honduran Woman Speaks from the Heart., and (with Jodie Evans)Stop the Next War Now (Inner Ocean Action Guide).